The arrival of migrants at the southern border has not changed from President Donald Trump’s term, according to President Joe Biden.

“Truth of the matter is, nothing has changed,” he told reporters at his first White House press conference, on March 25, adding:

As many people came — [there was] a 28 percent increase in children to the border in my administration, [but there was a] 31 percent in the last year in 2019 before the pandemic in the Trump administration. It happens every single, solitary year.

There is a significant increase in the number of people coming to the border in the winter months of January, February, March. It happens every year.  In addition to that …  The reason they’re coming is that it is the time they can travel with the least likelihood of dying on the way because of the heat in the desert.

However, Biden’s agencies have released data showing a sharp rise in arrivals in March. For example, the Center for Immigration Studies posted a March 24 chart of federal data: 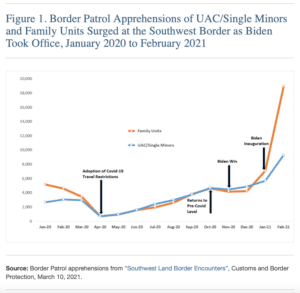 Some of the raise consists of single adults who are counted multiple times as they try and fail repeatedly to cross the border.

The official numbers also exclude the rising inflow of single adults who do sneak across the border. An agency source told Breitbart News on March 24 that roughly 130,000 adults sneaked through the border during Marsh.

Biden also suggested that Trump is responsible for the apparent migration increase by failing to build up the processing capacity needed to avoid a traffic jam at the border. He said:

The way to deal with this problem — and I started to deal with it back when I was Vice President by putting together a bipartisan plan of over $700 million to deal with the root causes of why people are leaving. What did Trump do? He eliminated that funding, He didn’t use it. He didn’t do it.

And in addition to that, what he did, he dismantled all the [processing] elements that exist to deal with what has been a problem and has continued to be a problem for a long time.

He in fact shut down the number of beds available. He did not fund HHS [the Health and Human Services agency] to get people, to get the children out of those border patrol facilities, where they should not be. That’s supposed to be no more than a few days, a little while, But he dismantled all that. What we’re doing now is tempting to rebuild the system that can accommodate what is happening today. And I’d like to think is because I’m a nice guy but it’s not, it’s because of what’s happened every year.

Over 2,240 illegal aliens have been encountered in Del Rio Sector over the past three days alone. These arrests contribute to the nearly 300% increase in apprehensions over last year. This increase is far higher than the normal seasonal fluctuations we traditionally see. pic.twitter.com/be6lYSqicf