“The Victim Of Immigration Crime Engagement (VOICE) Office is terminated,” said the June 11 announcement from deputies for Alejandro Mayorkas, the secretary of the Department of Homeland Security.

Instead, officials are creating a “Victims Engagement and Services Line” (VESL) to offer:

…a more comprehensive and inclusive victim support system … to all victims regardless of immigration status of the victim or perpetrator. The expanded services provided through VESL will include guidance on available[getting]  U- and T-visa]s[s].

The U visa and T visa programs offer green cards to illegal migrants who help solve crimes. But both programs can be exploited by illegals to get work permits and green cards by fraud. Mayorkas has repeatedly promised to accelerate the award of benefits via the programs. In 2017, Breitbart News reported:

The U visa was created in 2000 to provide visas for up 10,000 witnesses to crimes each year.  But that 10,000 visa-a-year cap was blown wide open by numerous exceptions and expansions because the law gave the residents’ agency officials much authority over how the program is run.

In 2009, 10,937 people applied for the visa. Six years later, 60,710 people applied, according to data provided by DHS to the Immigration Law Reform Institute.

On June 8, Mayorkas promised to keep the “dignity” of migrants “foremost in our efforts.”

For example, Mayorkas said he had issued a directive saying, “we should refer to those individuals as ‘non-citizens’ to reflect that their lawful presence, or their unlawful presence in the United States does not define their dignity as individuals.”

“The dignity that he needs to be concerned about is the dignity of America’s children who are being killed by people who shouldn’t be here in the first place,” responded Mary Ann Mendoza, whose police officer son was murdered by an illegal migrant.

“I met Mayorkas seven years ago at a sheriff’s roundtable discussion in L.A. county,” she said. “I tried to speak with him about the enforcement of laws to save American lives, but he just had no comment.”

“Do I want to call an office for help if it is also helping the guy who killed my son?” asked Don Rosenberg, the president of Advocates for Victims of Illegal Alien Crime. His son was killed in 2010 by an illegal alien driver who was sentenced to 43 days in jail.

“All this administration seems to want to do is help illegal aliens at the expense of law-abiding citizens and legal immigrants,” he added.

Under Mayorkas’s 2021 rules, the dignity of the foreign driver would not be disturbed by deportation.

Pro-migration groups have repeatedly denounced any focus on crime by illegal migrants. In 2017, the VOICES program was slammed by Chris Newman with the National Day Laborer Organizing Network, which lobbies for rules to help illegal migant laborers:

Victims are not more harmed or need greater healing when the perpetrator of those crimes are not citizens. This is clearly not an earnest effort. So you do have to ask what’s going on here. I think it seems pretty clear that this office is designed to gin up fear as part of President Trump’s overall war on non-white immigrants in the United States. I think it’s about, unfortunately, the racist exploitation of grief and tragedy. I think that the office is despicable.

But huge numbers of Americans are victimized or killed by migrants illegally in the United States because pro-migration groups and officials refuse to detain and deport illegal migrants, often because business groups want to use migrants as workers and consumers. For example, Massachusetts cops finally arrested a migrant on June 9, shortly after he had allegedly raped an American teenager. The man had arrived two years ago but was allowed to overstay his 90-day visa.

Some researchers argue that illegal migrants are less likely to commit crimes.

But regardless of their crime ratio to crimes by Americans, the federal policy of allowing illegal migrants to enter and stay in the United States inflicts a massive amount of murder and mayhem on innocent Americans.

For example, a research team that sought to downplay the crime rate by illegals posted the actual crimes committed by illegals in Texas from 2012 to 2018. The illegal alien mayhem allowed by governments generated 213,052 arrests, including 50,590 felony arrests. 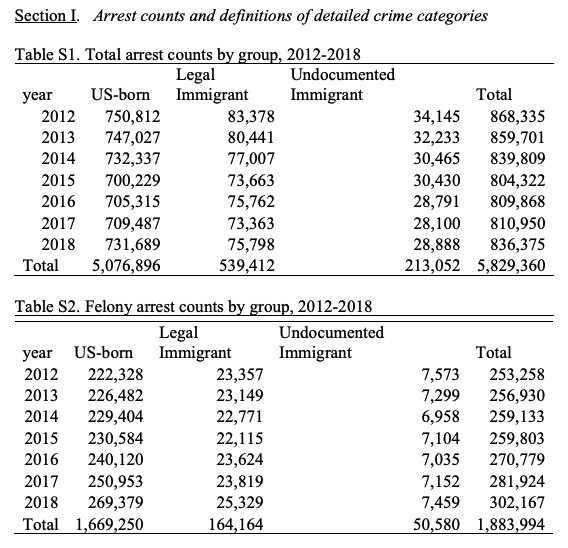 The report did not state how many of the 9,182 murder arrests and 693,714 assaults were committed by the many illegals who are being used as wage-cutting workers and revenue-boosting consumers by the state’s business interests.

The hands-off policies reflect the view by Mayorkas and pro-migration groups that the U.S. government should treat illegal migrants just as they treat U.S. citizens.