The poll also showed 55 percent of the voters believe Biden’s deputies should have preserved President Donald Trump’s border rules and while 55 percent believe that Biden’s policies increase the flow of drugs.

Yet the poll also showed that many swing voters reject the GOP’s criticism of Biden. For example, voters split 50 percent to 50 percent when they were asked, “Is the Biden administration creating an open border or is it just trying to enforce immigration laws more humanely?” 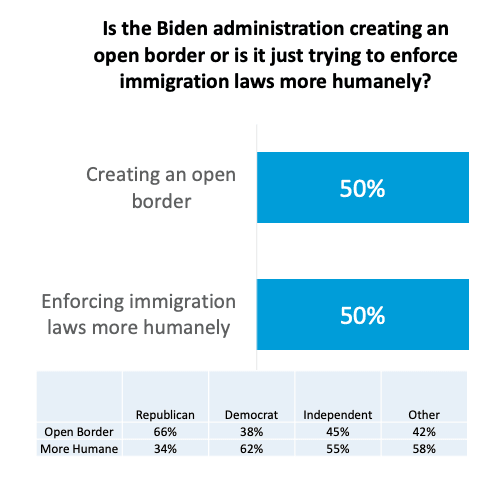 Biden’s 50 percent support on immigration likely will minimize any harm in the 2022 election — unless the GOP can put forward a positive pro-American agenda for migration and the border.

So far, the GOP’s leaders — including Rep. Kevin McCarthy (R-CA) and Sen, Mitch McConnell (R-KY) — have refused to offer a positive immigration message to swing voters, and especially to swing-voting women who are worried about their families’ income and status amid the chaotic migration.

Instead, the GOP leaders merely offer a negative message of blaming Biden for a “crisis” at the border — including the damage done to migrants — while the Democrat-dominated TV networks broadcast Biden’s promise of “humane, orderly, and safe” migration.

But the GOP’s negative message allows GOP leaders to stay silent about the wealth-shifting economics of migration, which is fervently backed by their major business donors who gain from the inflow of new consumers, renters, and cheap workers.

In response, Rep Jim Banks (R-IN) and the 100+ members of the Republican Study Committee are now prodding GOP leaders towards a more populist agenda. That April agenda includes the protection of American families from the pro-migration policies favored by Wall Street investors, saying:

Americans regardless of party recognize the need to afford basic protections to U.S. workers in the job market. And voters throughout America recognize that we must first consider the social, economic and financial well-being of all American citizens and lawful residents here today. Biden has rejected this mainstream consensus and, with virtually no announcement or discussion, is sailing the United States deep into uncharted waters.

Like many other polls, the Harvard Harris poll shows most voters oppose Biden’s claims — and his business-backed inflow of migrants into Americans’ workplaces, communities, schools, and civic life.

Sixty-seven percent of respondents say illegal migrants should be turned back to Mexic0o — as Trump required — while 33 percent agree with Biden’s policy of allowing migrants into the United States to apply for asylum, the Harvard Harris poll said.

Sixty-one percent say the huge flood of coyote-accompanied children at the border is the fault of the Biden administration, while 39 percent blame Trump for the inflow during Biden’s first several months, according to the poll.

Fifty-six percent of respondents reject Biden’s claim “climate change, racism and sexism are root causes of migration,” while just 44 percent agree, according to the poll.

Each year, four million young Americans enter the workforce. Their government forces them to compete against a growing population of illegal migrants, against one million new legal immigrants, and the resident workforce of roughly two million temporary guest workers.

So a wide variety of pollsters have shown deep and broad opposition to labor migration and the inflow of temporary contract workers into jobs sought by young U.S. graduates. This opposition is multiracial, cross-sex, non-racist, class-based,  bipartisan, rational, persistent, and recognizes the solidarity Americans owe to each other.