Two-thirds of entry-level tech jobs go to compliant foreign guest-workers, not to the young American professionals who may create a new wave of establishment-shaking companies, according to a report from Bloomberg.

In 2018, “the U.S. had between 96,000 and 143,000 openings in IT occupa­tions that typically went to candidates with a bachelor’s degree or higher in computer science or engineering,” said the March 10 report, headlined “STEM Graduates Deserve a Better Path to Good Jobs.”

But the government each year provides “Occupational Practical Training” (OPT) work permits to hundreds of thousands of foreigners who have paid tuition to American universities. It also invites roughly 85,000 foreign graduates on H-1B work visas, the report says.

“So, OPT participants accounted for anywhere from one-third to one-half of new hires. If you add H-1B candidates, up to two-thirds of openings went to guest workers,” said the report, which relies heavily on Hal Salzman, an expert on high-tech employment at Rutgers University.

Few of the OPT workers are high-skilled, Bloomberg acknowledged: “More than 70% of nonresident computer science master’s degrees awarded in 2018 came from unranked programs, or those ranked 50 and lower by U.S. News and World Report. Just 17% came from schools ranked in the top 25. [universities]”

Breitbart News has extensively reported on the fraud-ridden OPT program — and its sister program, the Curricular Practical Training program — which provides Fortune 500 companies with roughly 400,000 cheap foreign workers each year.

The OPTs — and the many similar H-1B, L-12, J-1, and TN visa workers — fill many starter-jobs and mid-career white-collar jobs in a wide variety of industry sectors, including tech, healthcare, academia, accounting, and design.

Few of the OPT workers complain about their lower-wage jobs because their CEOs can fire them at will.

More importantly, the foreign OPT workers accept the low wages and long hours in exchange for the promise of green cards. This means that employers can pay foreign graduates with government-supplied free green cards — in contrast them paying American graduates with dollars subtracted from company profits, stock values, and executive bonuses.

Nationwide, at least 1 million foreigners are working in lower-wage, white-collar jobs in the hope of getting green cards. This huge “Green Card Workforce” helps lower many Americans’ salaries, diminish the importance of professional advice in business, and smother the future creation of innovative companies by experience and outspoken American graduates.

Biden's DHS opens the 'OPT' door wider for many foreign college graduates to take starter jobs & careers from new US graduates.
That's a reversal from Trump, when his deputies quietly tried to help American grads get the jobs. #H1B, #OPThttps://t.co/Y3o9PIgpTj

Jay Palmer closely monitors this layered hiring system in his role as a human rights advocate for migrants, visa workers, and trafficked workers.

U.S. college graduates owe so much in student loans that they have to work for at least $45,000 or $50,000, but the OPT worker “will come out and work for $30,000 because of the poverty levels back in their home country,” he told Breitbart News, adding:

They’ll work for 30 percent to 40 percent less than Americans can work and drive American salaries down and drive the [U.S.] college students out of work.

The [OPTs] will live very cheaply, sometimes five and seven and eight to a house. They will send their money back to their country, for example, India, Slovenia, Croatia, or China or Vietnam, Venezuela, or other countries. So it is not helping the economy because they’re not spending money here .. tax receipts decline, municipalities lose out.

And the [employers] are paying them on 1099s. The majority of them on 1099s never file their taxes. This is a huge scheme that I know that the State Department and Department of Labor is looking at. The Fortune 500 companies have their master services agreements with third-party contractors and are saying that they’re not liable for this.

If a company hires an American college graduate, the company has to pay employment tax, unemployment tax, Social Security taxes, pay their health care, all of the normal benefits. But if they hire an OPT worker, they’re hiring them through a third-party contractor, paying them on 1099s, without benefits or taxes. So their rate of return [per employee] is about 80 percent higher. They save up to 28 percent just by not paying benefits.

And the [subcontractor hourly] rates are lower. If the rate [paid by the Fortune 500 company to the subcontractor] is $50 an hour [per graduate], the workers probably end up maybe getting $20 an hour, and the subcontractors pocket the difference. That scheme is known as the layer system.

Palmer works with the Weiser Law Firm in Pennsylvania.

Over time, the mass of foreign tech workers are getting a greater share of careers — and wealth — from CEOs in the prestigious tech firms, as many American graduates into lesser jobs. 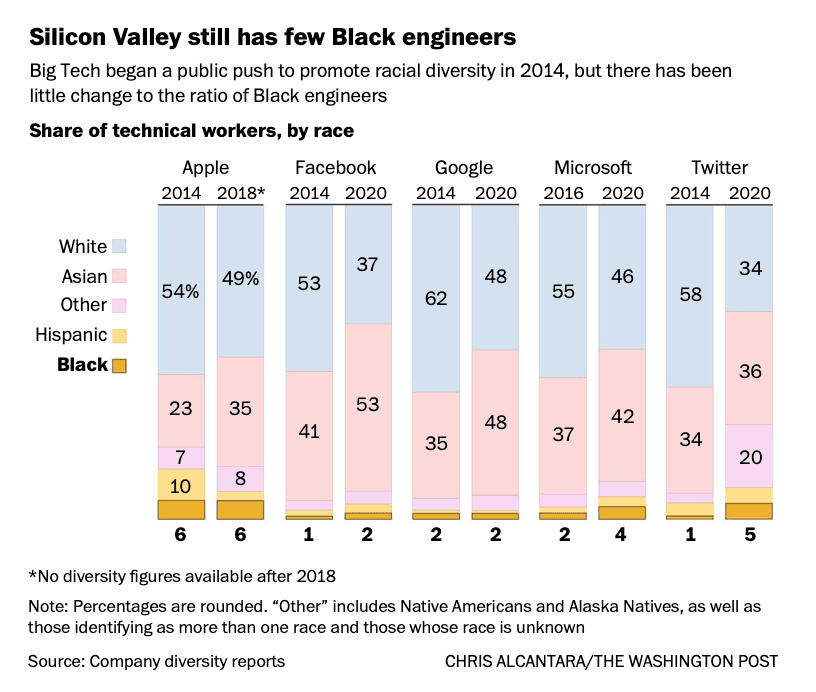 Shantanu, 33, received his Ph.D. in structural biology from the University of Tennessee, Knoxville, in December. His OPT application arrived on Nov. 17 and he didn’t receive a filing receipt until Feb. 11. He’s still waiting for work authorization and is unable to start his postdoctoral fellowship at Northwestern University’s Feinberg School of Medicine.

“We invest a lot of time coming to the U.S., working in the U.S. and contributing to the U.S.,” said Shantanu, who asked to be identified only by his first name. “And after a while, when we are treated like this, it makes us wonder why we chose the U.S. in the first place.”

The Bloomberg article includes a few proposed reforms to the OPT program, but those reforms would not significantly reduce the number of American graduates who get sidelined by CEOs who prefer to pay compliant foreign workers with government-supplied green cards.

Shifting oversight from DHS to the Labor Department should be an obvious baseline, according to Daniel Costa of the Economic Policy Institute and Ronil Hira of Howard University …  Costa and [Ronil] Hira have sensibly proposed that foreign students should be “paid according to U.S. wage standards.”

Eliminating the payroll tax advantage would also help ensure that merit rather than pay drives hiring … A carrot-and-stick approach, for example, could exempt employers from such taxes for two years when they hire new U.S. STEM graduates, and charge a 10% penalty for displacement when an OPT student is hired.

Finally, the U.S. should focus on attracting talent for jobs where a shortage truly exists. This involves ensuring visa holders have a legitimate job offer with a wage at or above specified levels, making a concerted effort to recruit U.S. workers and targeting the truly “best and brightest.”

President Donald Trump missed the opportunity to make himself a champion for white-collar workers in the 2020 election, largely because a few of his top aides simply favored the major donors and the Fortune 500 companies.

But according to Bloomberg, Biden may grab the political prize by forcing pro-employee changes to the visa-worker programs:

This is where Biden has an opening. Many American workers who voted for Trump were lifelong Democrats. They bought into his agenda only because it seemed like someone was finally hearing them. Biden, the ultimate empath, has built a political brand on listening.

“His personal grief has become a synecdoche for a nation of suffering, be it Covid-related loss or diminishing job opportunities or opioid addiction,” the article concluded.

Biden's amnesty bill dramatically raises the $$ incentive for Fortune 500 CEOs to NOT hire American graduates.
It is a giveaway to the many CEOs & investors who prefer compliant, no-rights, foreign graduate contract-workers.
IOW, #H1B for every career. https://t.co/WUW5lREV7l