Thirty-five CBC legislators did not sign the letter — and the 18 signers mostly come from districts where black voters are in the minority. The 2:1 split spotlights the unpopularity of the proposed amnesties among blacks, despite top-level pressure by Democratic leaders, business leaders, and the pro-migration media.

The caucus has the voting power to approve or block the wage-cutting, rent-boosting economic policies enshrined by the amnesties. If even a handful of CBC Democrats in the evenly-divided House emphasized the economic interests of their voters, Democratic leaders would be forced to rewrite the legislation to favor American blacks. 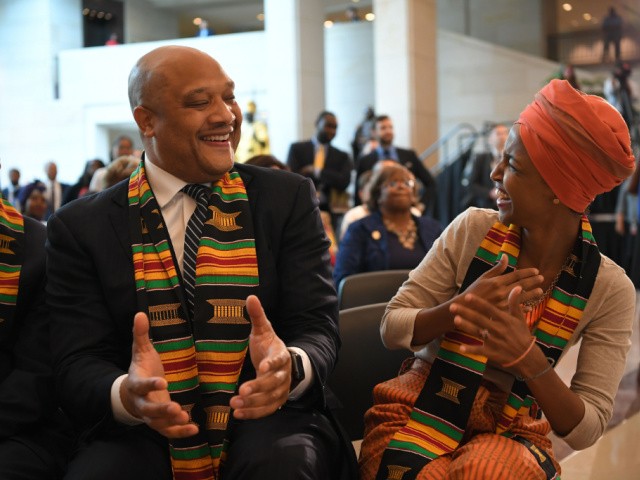 Democrat Reps. Ilhan Omar and André Carson arrive for the Congressional Black Caucus (CBC) ceremony to commemorate the 400th anniversary of the first recorded forced arrival of enslaved Africans in the Emancipation Hall of the US Capitol in Washington, DC on September 10, 2019. (Mandel Ngan/AFP via Getty Images)

Amnesty is unpopular among blacks because legal and illegal immigrants have long suppressed blacks’ wages, spiked their rents, and diluted their political power and cultural clout. This economic pressure was briefly reversed under President Donald Trump’s lower-immigration policies, so allowing black wages to rise and black poverty to drop.

As members of the Congressional Black Caucus, we write to reiterate our strong support for including a pathway to citizenship for Dreamers, essential immigrant workers, farm workers, and Temporary Protected Status (TPS) holders in the final version of the Build Back Better reconciliation bill.

“The pandemic has exacerbated deep racial, gender, and economic inequities, so it is imperative that we take this opportunity to ease those divides and begin working towards an equitable recovery,” said the letter, which was fronted by Rep. Joe Neguse (D-CO), the son of two asylum-seeking Eritrean migrants.

Neguse represents Colorado’s second district, a mostly white, upper-income, liberal district northwest of Denver. Almost two-thirds of the district voted for President Joe Biden in the 2020 election. Neguse is well-funded by liberals, as well as by Fortune 500 companies and investors who will profit from a greater migrant inflow of lower-wage foreign workers, taxpayer-funded consumers, and room-sharing renters. 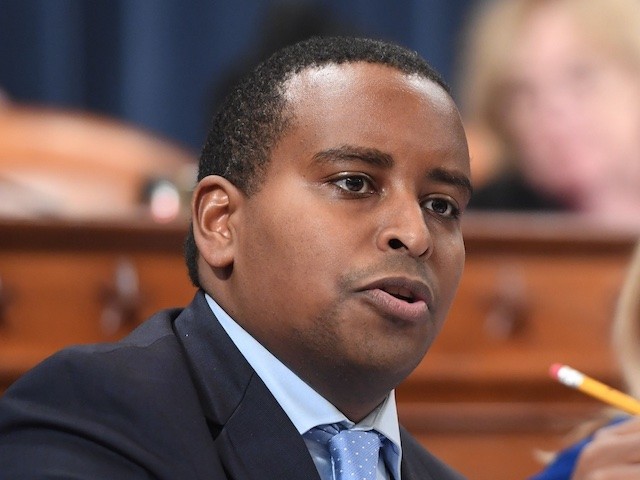 The signers include Black Caucus members from districts where a solid majority of voters are non-black urban progressives and immigrants:

The letter is not an official CBC document and was not signed by the group’s chair, Rep. Joyce Beatty (D-OH).

The letter is also not signed by Rep. Yvette Clarke (D-NY), who chairs the Congressional Black Caucus Immigration Task Force. She represents a poor New York population, of whom roughly 40 percent are immigrants. She is the daughter of Caribbean immigrants.

Wealthy donors have funded multiple advocacy black-themed groups to pressure legislators to back an amnesty, regardless of Americans’ preferences. “Congress must pass a budget reconciliation measure that centers Black immigrants,” said a September 15 statement from the UndocuBlack Network.

In July, 30 members of the caucus asked officials to invite deported migrants back to the United States.

The Neguse letter does not mention features of the amnesty package that would import many additional migrants and would allow Fortune 500 companies to hire unlimited foreign graduates instead of Americans.

The CBC did not respond to inquiries from Breitbart News.

“Black Americans are skeptical of mass immigration,” said Mark Krikorian, the director of the Center for Immigration Studies. He continued:

The Black Caucus members who didn’t or didn’t sign this letter is strong evidence of that skepticism. Those black members who don’t have a lot of black constituents, and are conventional members of the left, are going to be enthusiastic about the immigration. Those who have a significant black population in their constituency are going to be more cautious, naturally. It just makes sense.

The CBC members will try to hide their pro-amnesty votes from their constituents, he said:

The Black Caucus is certainly going to support this legislation, but it’s not going to be out front making the case for it, because in many cases, their own voters are not wild about amnesty. This isn’t to say that black voters have become mobilized as an anti-amnesty political force. But if you’re a congressman with a significant percentage of black constituents, why cause yourself a headache by getting out front? You’ll vote for it when comes up and probably not talk about it all that much.

There’s not going to be any media or other pressure on them to justify their [pro-amnesty] position, which is contrary to the interests of many of their constituents. It’s just not likely to happen. Never has before.

For many years, the CBC has kept a very low profile in migration politics, partly because many ordinary blacks rationally oppose the wage-cutting, rent-boosting labor migration that is favored by employers, investors, and the bipartisan establishment. That international migration has pushed many American blacks out of coastal cities and back to the south, especially to Atlanta, Georgia.

When businesses say they are having trouble finding Americans to take jobs in construction, manufacturing, hospitality and other service work, what is generally best for the country? Is it better for businesses to raise the pay and try harder to recruit non-working Americans even if it causes prices to rise, or is it better for the government to bring in new foreign workers to help keep business costs and prices down?

Nationwide, jobs for Americans are more popular than amnesties, according to a September 1-2 Ipsos survey of 1,299 Americans for NPR.

Ipsos asked: “Would you support or oppose creating a legal way for the following groups of immigrants, who meet certain qualifications, to become U.S. citizens? … All of the estimated 11 million immigrants living illegally in the U.S.?”

Ipsos also asked: “When jobs are scarce, employers should prioritize hiring people of this country over immigrants?”

In April 2018, Breitbart News reported that blacks without college degrees are more concerned about cheap-labor migration than blacks with college degrees. Professor Tatishe Nteta, at the University of Massachusetts at Amherst, wrote:

Working-class African Americans are significantly more supportive of policies that seek to: decrease the number of immigrants coming to the United States, increase the federal role in verifying the employment status of immigrants, and attempts to amend the Constitution’s citizenship provisions.

Each year, four million young Americans enter the workforce. They are forced by their government to compete against a growing population of illegal migrants, against one million new legal immigrants, and the resident workforce of roughly two million temporary guest workers.

The breadth of investors who founded and funded FWD.us was hidden from casual visitors to the group’s website sometime in the last few months. But copies exist at the other sites.