The nation’s TV networks have almost stopped covering President Joe Biden’s very unpopular mass migration crisis at the southern border, according to a study by Rich Noyes at the Media Research Center (MRC).

“The illegal immigration influx along the U.S. southern border has worsened every month since President Biden took office, but the liberal broadcast networks have essentially stopped covering the crisis,” the MRC report said, released August 16. The report continued:

But while the reality along the border is worse than ever, coverage of the crisis on the ABC, CBS and NBC evening newscasts has slowed to a trickle: Just four minutes and 20 seconds for the entire month of July (including weekends), down an astonishing 96 percent from the Biden-era peak of 113 minutes in March.

And on August 12, when the terrible July border statistics were released, none of the three broadcast evening newscasts bothered to even mention them — but all three found time for the latest developments in the legal soap opera surrounding singer Britney Spears.

Amid the urging of populist-minded Republican leaders, such as Rep. Jim Banks (R-IN), GOP leaders prefer to spotlight other issues — such as inflation, crime, and border chaos — that are more acceptable to the GOP’s business donors.

Business advocates for greater migration claim much credit for reshaping the TV networks’ coverage since March.

Biden’s polls were damaged in February and March because TV networks were covering the border chaos with the same critical themes and emotional style that they had developed during former President Donald Trump’s administration. 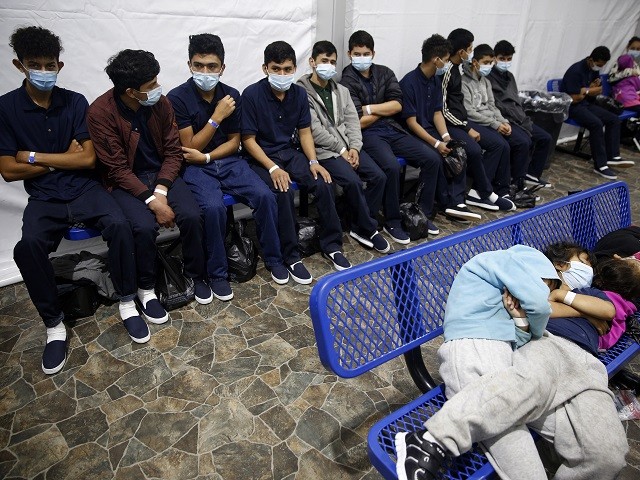 Young unaccompanied migrants, wait for their turn at the secondary processing station in the Department of Homeland Security holding facility on March 30, 2021, in Donna, Texas. (Dario Lopez-Mills – Pool/Getty Images)

But business-funded lobbyists and their dependent progressive advocacy groups helped change the TV coverage, according to a May briefing given by Todd Schulte, the president of Mark Zuckerberg’s FWD.us lobby group for greater migration. Schulte, whose group has had several former advocates working in Biden’s White House, said:

I think you saw during that big spike [of bad publicity] was that the administration was allowing the opposition in a very crass and gross way to define the [debate]. And so we have really seen as a sea change over the last two months, as you’ve seen the administration go on offense … Not only have they regained their footing on this but they got a big rebound of the polls on immigration. And look, so I’m going to be clear, [it was] a hard, hard, hard March. And so I think the big thing [is that] … defining the frame of what this means [is] the single most politically important thing you can do.

Noyes’ research shows the impact of the activists’ lobbying:

Schulte’s deputies also explained how they worked with Alejandro Mayorkas, the secretary of the Department of Homeland Security (DHS), to bring deported migrants to their migrant families in the United States. The goal was to generate staged, dramatic, and emotional videos for the evening news that would push aside videos of chaotic border scenes.

“Some of the family reunifications that we saw that sort of changed the coverage in May of this year and started humanizing what exactly is happening,” said Xochitl Hinojosa, a director at FWD.us’s PR firm, Bully Pulpit Interactive. She spoke during Schulte’s May 26 video presentation to Zuckerberg-tied amnesty campaigners. 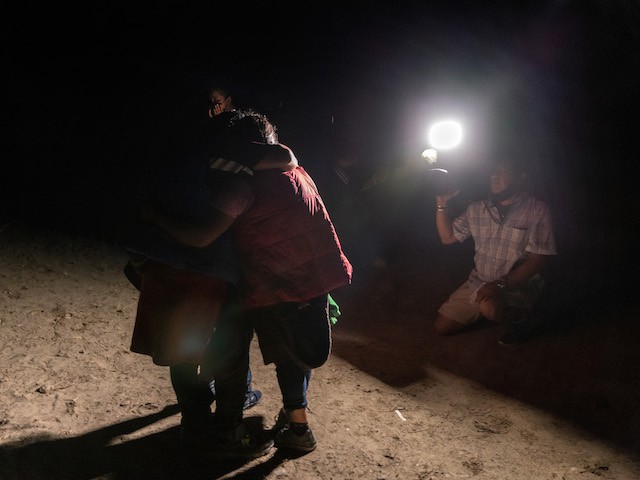 A TV crew films as Guatemalan immigrants embrace after they were smuggled across the Rio Grande from Mexico on April 11, 2021, in Roma, Texas. (John Moore/Getty Images)

Noyes, the MRC research director, tracked that emotional coverage. “They all did stories about the first round of these reunions, so they are taking the bait, and, and giving them the [favorable] settings that they want,” he told Breitbart News.

For the TV networks, migration is presented as a civil rights issue for migrants, Noyes said, adding:

They don’t say it flat out mean because it’s illogical to say someone violating the laws has a civil right to do so. But they do have tremendous sympathy for one side, and it’s all about the well-being … the human interest of those who are trying to come across, and [shows] very little about the consequences to the nation or the [American] people.

The TV networks largely ignore the concerns of Americans, Noyes said. Media coverage “is organized around the plight of those who would immigrate and doesn’t really distinguish between legal and illegal,” he added.

The networks do need to show drama, but they tend to highlight drama that helps and pleases Democrat-leaning viewers, he added. “They cheer at some things; they jeer at other things,” Noyes said. “It is ideological but …  [but] it’s much more tribal and gut as well,” for the political and emotional needs of the media’s allies and the left-leaning portions of their audiences, he said.

For the TV networks, “the immigrants are always the good guys — there are no bad immigrants,” he said. 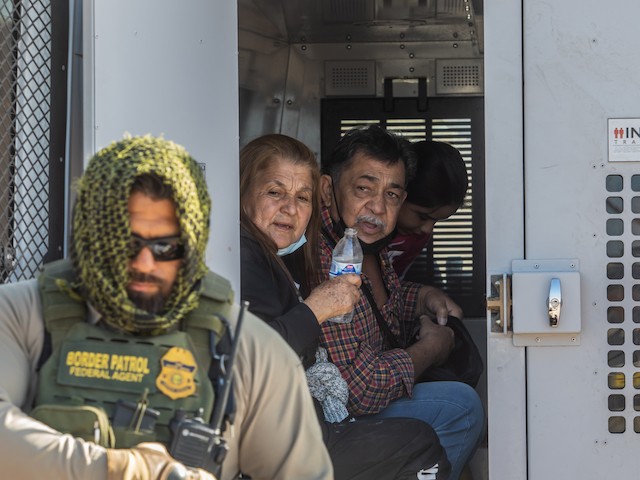 A familiy of asylum seekers from Colombia are seen inside Border Patrol Inmate transport after they turned themselves in to U.S. Border Patrol Agents on May 12, 2021, in Yuma, Arizona. (Apu Gomes/Getty Images)

This skew is partly driven by their customers’ demand for news they prefer, Noyes said, adding:

The audience themselves will almost trap the journalists — [Many viewers] only want to hear their team’s news.  They watch reports on politics from the perspective of a home team, like they would in sports.

The major TV networks are owned by giant corporations which are owned by influential investors. Those corporations and investors have a financial interest in importing more TV viewers who can be sold to advertisers. They also have a shared interest in shutting down any criticism of the H-1B and other visa worker programs that import lower-wage, mid-skilled foreign graduates for the technology jobs needed by U.S. graduates.

Despite the media blackout, the public trust in the Democrats’ handling of immigration issues is declining — giving the GOP leaders a huge populist opportunity if they choose to override their donors’ demands.

A Morning Consult poll taken August 8-9 with 1,996 registered voters, for example, showed that only 26 percent of political independents said they trust congressional Democrats to handle the immigration issues. In contrast, 45 percent said they trust Republicans — and, more importantly — 30 percent of the independent respondents indicated they were on the fence by declaring they “don’t know” or have “no opinion.”