The images flashing across American television screens that showcase Vladimir Putin’s violence and aggression in Ukraine are stoking American businesses to shutter their operations in Russia. But the actions of U.S. companies to avoid any role in this aggression against a sovereign democratic nation are exposing hypocrisy. How long should our largest U.S. businesses wait to remove their operations from any nation when it works to undermine its neighbors and American interests?

For example, big U.S. banks like J.P. Morgan Chase were among the first to leave Russia. A spokesman for J.P. Morgan wrote, “we have actively been unwinding Russian business and have not been pursuing any new business in Russia.” While this response seems noble, every Chase customer and shareholder should be asking, “What about your operations in China?”

Fewer than 5,000 miles from Ukraine, China’s invasion of Taiwan is looming. The Chinese Communist Party has already crushed all free speech in Hong Kong. Unmarked police have also targeted independent news sources there and are hunting down and arresting innocent Hong Kongers. Even Chinese Communist Party leader Xi Jinping’s statement aimed at Hong Kong and Taiwan that “those who engage in separatist activities in any part of China will be smashed to pieces” sounds eerily familiar to recent statements by Putin.

China’s hair-thin temperament, saber-rattling, and threats to impose the “worst consequences” on any country that provides military support to Taiwan call to question corporate America’s response. Why are they waiting to detach from China like they are rushing to detach from Russia? And when will these corporations put Americans first?

A closer look at J.P. Morgan’s $20-billion exposure in China exposes the bank’s conflicts, as do the actions of the company’s CEO and Board of Directors. China kills more, abuses more, and even pollutes more than Russia, all while threatening to take the same violent actions against Taiwan that Russia is taking in Ukraine.

J.P. Morgan Chase’s CEO Jaime Dimon, acutely aware of the Chinese government’s sensitivities and zero tolerance for criticism, is dedicated to building his relationship with China. Dimon even walked back comments he made about J. P. Morgan outlasting the Chinese Communist Party. But what could we expect from a CEO who has more economic faith in China than the United States? Unfortunately for America, Dimon is only the tip of this iceberg. 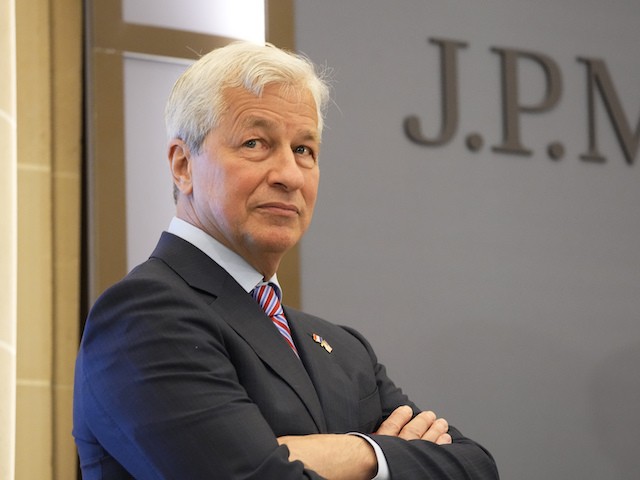 Another director at J.P. Morgan joined the advisory board of Beijing’s Tsinghua University School of Economics and Management in 2014.  In 2016, she gave a speech at the school — which is Xi Jinping’s alma mater — on “cognitive business,” in which she praised China and stated that she is a “great fan.” Will she remain a “great fan” if China invades Taiwan?

Like Dimon, a third J.P. Morgan director also has no problems expanding the relationship with China. She serves on the board of Manulife Financial, one of the few companies with asset management companies in China, Taiwan, and Hong Kong. In a press release, Manulife boasted that it is “well-positioned to benefit from growing investor interest in the greater China region.”

It’s not uncommon for corporations to expand broadly and globally. But the question remains, is there any consideration for China’s threatening behavior toward Taiwan on the heels of Russia’s invasion of Ukraine? These same corporate directors withdrawing from Russia for human rights violations have no problem serving on boards or advancing their financial interests in a country that, while out of the mainstream media’s attention, is committing similar abuses.

Corporations like J.P. Morgan should gain no goodwill by leaving Russia over its abuses against Ukraine when they excuse the same behavior by China that is building against Taiwan. War in Ukraine has compelled most U.S. corporations to leave Russia. Are these companies waiting for the same violent images in Taiwan, or will they act against China’s abuses while it still matters? We have an obligation to recognize the importance of human dignity, and as Americans lead by example.