“We’ve hit a bit of an Iceberg and are currently experiencing some lettuce supply chain disruptions due to the impacts of the recent Queensland and NSW [New South Wales] floods,” a statement on KFC Australia’s website read.

“This means you may see a temporary blend of lettuce and cabbage throughout KFC restaurants in NSW, VIC [Victoria], QLD [Queensland], ACT [Australian Capital Territory] and TAS [Tasmania] during these shortages. If that’s not your bag, simply click ‘Customise’ on your chosen product and remove Lettuce from the recipe,” the notice advised.

“We’re working with our multiple suppliers to provide them with support, but we do expect disruptions to continue in the coming days,” the United States-based fast-food chain added.

The price of iceberg lettuce in Australia has soared to nearly $12 AUD ($8.67 USD) per head in some areas in recent days. A woman shopping for groceries in Queensland, Australia, on May 30 posted photos to the online forum Reddit showing iceberg lettuce on sale for $11.99 AUD a head. 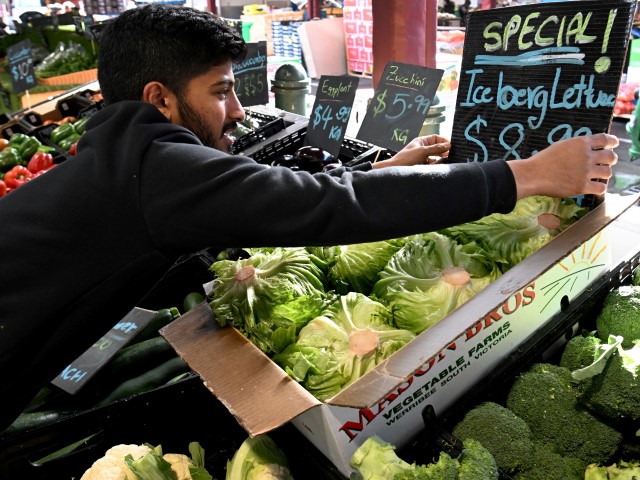 Syed Hyder from a stall at Melbourne’s Queen Victoria Market adjusts a display of iceberg lettuce on June 7, 2022. The local price soaring by as much as 300 percent in recent months.  (WILLIAM WEST/AFP via Getty Images)

The price of fresh produce in Australia recently jumped after record floods decimated crop harvests across the states of Queensland and New South Wales from late February to early April. The natural disaster was one of the worst such events ever recorded in Australian history.

Some lettuce farmers in Queensland’s Lockyer Valley have lost three crops in a row since the floods, the Australian Broadcasting Corporation (ABC) reported on June 5.

“[Lettuce growers] haven’t been able to get in to harvest and, where they have, they’ve only found a small portion of the crop being market-ready, not affected by diseases,” Richard Shannon, the acting chief executive of an Australian horticulture group called Growcom, told ABC.

“It’s been a devastating time out in the Lockyer Valley for lettuce growers and other growers around the state [and] northern NSW,” he said.

Queensland’s capital of Brisbane received the equivalent of London’s annual rainfall within a three-day period from February 25 to February 28, ABC reported on March 9.