It looks like Bidenflation is preparing to steal Christmas again this year.

A combination of a worsening economic outlook and rising prices will curb holiday shopping this year, according to the annual holiday retail survey from Deloitte.

Holiday shopping is expected to be flat compared with last year, the survey showed. The average household plans on spending $1,455 on holiday shopping this year. Yet prices are up 8.2 percent over the past 12-months. As a result, inflation adjusted spending will be down.

The number of gifts households expect to purchase has plummeted by nearly half, falling to nine from 16 last year, according to the survey. The time spent shopping is also likely to contract. Consumers plan on just 5.8 weeks of holiday shopping, down from 6.4 weeks last year. Plans to visit stores fell from 5.9 stores to 6.6 stores in 2021. Website visits for shopping are expected to fall to 9.1 from 11.1 last year. That’s all consistent with the idea that real inflation-adjusted spending is expected to fall.

Retail executives, on the other hand, remain very bullish. Seventy-seven percent say they expect holiday sales to increase. This could have a big impact on inventories if retailers have over-ordered for the holiday season. Last year, early holiday shopping led retailers to expect a big surge through the end of the year. Instead, higher-than-expected sales in October led to lower-than-expected sales after Thanksgiving, leaving retailers with excess inventories. The unwind of that big inventory build-up was one of the big reasons the economy contracted in the first quarter of this year.

Indeed, in a similar pattern to last year, many people plan on getting their shopping done early this year. Twenty-three percent of holiday shopping budgets will likely be fully exhausted by the end of October, according to Deloitte. This is a pattern often seen in inflationary periods: consumers shop early to avoid higher prices later. This, however, can be self-defeating because the surge in demand prompts retailers to hold back on offering discounts.

People still want to give out gifts; but with inflation running so hot, they are forced to cut back somewhere. The Deloitte survey suggests that they plan to pull back on non-gift purchases by a steep 12 percent. Travel demand will also decline. Just 31 percent of Americans are expecting to travel between Thanksgiving and mid-January, down from 42 percent last year.  Non-gift retail purchases during the holiday season are expected to fall to an average of $373. Combined with expected gift spending, overall retail spending is expected to be down five percent. 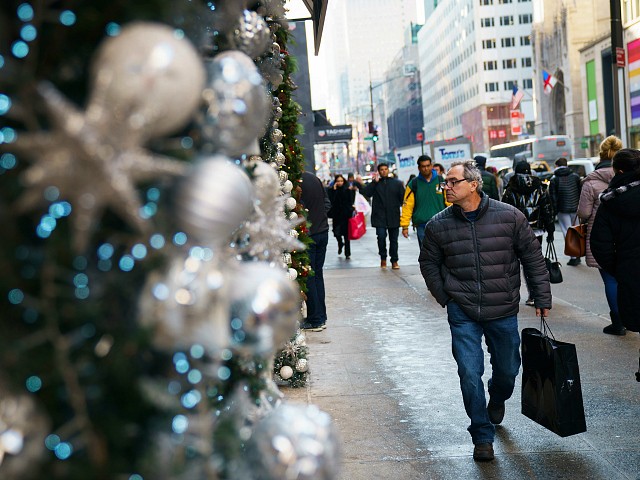 Spending on “experiences”—which includes entertaining at home and socializing away from home—is expected to grow seven percent compared to last year. Adjusted for inflation, however, purchases for experiences will contract. The Consumer Price Index for food at home is up 13 percent, nearly twice the expected growth of spending plans. Food away from home is up 8.5 percent, also higher than the expected spending growth.

It’s striking how much lower holiday spending plans are now than they were prior to the pandemic. Gift spending was expected to be $511 in 2019, versus the $507 expected this year, a 0.78 percent drop. Non-gift purchases were seen at $389 versus $373 now, a 4.1 percent decline. Experience spending was seen at $596 versus $575, a 3.5 percent decline. Since November of 2019, however, the Consumer Price Index is up by over 15 percent, indicating that real spending plans have fallen by 16 to nearly 20 percent.

Low-income earners plan to spend 25 percent more than last year, defying the overall trend. On the one hand, this could be a “silver lining” resulting from the strength of the labor market. A year ago, the unemployment rate was 4.7 percent and had been as high as 6.4 percent earlier in the year. This year, the unemployment rate has been four percent or lower every month and recently fell to 3.5 percent. On the other hand, this may also be another example of inflation hitting low income workers harder because they cannot avoid the higher prices. High income people, by the way, plan on reducing their spending by seven percent.