In a demographic breakdown of the educational attainment of the U.S. population aged 25 and older in 2015, the Census Bureau found that 91.8 percent of native-born Americans had a high school degree, compared to 72.0 percent of foreign-born people.

While native-born American adults were more likely to have completed some college (61.3 percent versus 47.6 percent of foreign-born adults) or an Associates degree (43.3 percent versus 37.6 percent), the disparity in educational attainment at Bachelors degree level and beyond was much less.

“The educational attainment of the native and foreign-born populations differ in distribution,” the Census report, based on on data collected from the Current Population Survey (CPS), reads. “The foreign born had a higher proportion of adults with less than a high school education (28 percent) compared to natives (eight percent).”

“However, on the opposite end of the educational spectrum, the foreign born were just as likely as the native population to hold an advanced degree (13 percent versus 12 percent respectively, not significantly different),” it added.

The presence of the foreign-born population had differing impacts on the overall educational attainment statistics of ethnic and racial groups in the U.S.

Overall Asians — both foreign and native-born — were more likely than any racial or ethic group to have a Bachelors degree or higher. 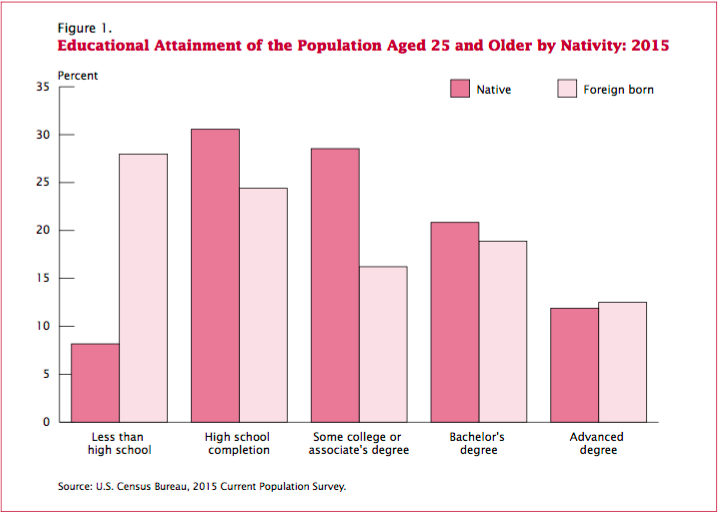