Maybe Harvard should give women a discount.

By the time they are 34 years old, women who graduate from Harvard make just 73 cents for every dollar earned by male graduates, a strikingly large gender gap for an elite American institution.

That means that the gender gap for graduates of elite universities tends to be much higher than that for the broader American workforce. Full time employed women in the United States typically are paid around 80 percent of what men are paid, while the elite university gap is around 11 percent higher.

The details of these gaps in the pay of elite college graduates come from a Breitbart News analysis of data collected as part of a recent study that linked tens of millions of tax filings with tuition records from almost every college in the country. The studies authors—Raj Chetty, John Friedman, Emmanuel Saez, Nicholas Turner, and Danny Yagan—analyzed how well or poorly colleges have built an economically diverse student population.

The underlying data provided by the authors also includes data about the median income in 2014 of those who attended colleges between the ages 19 and 22 in the early 2000s.

That data is further divided by the sex, enabling Breitbart News to derive each school’s gender gap. 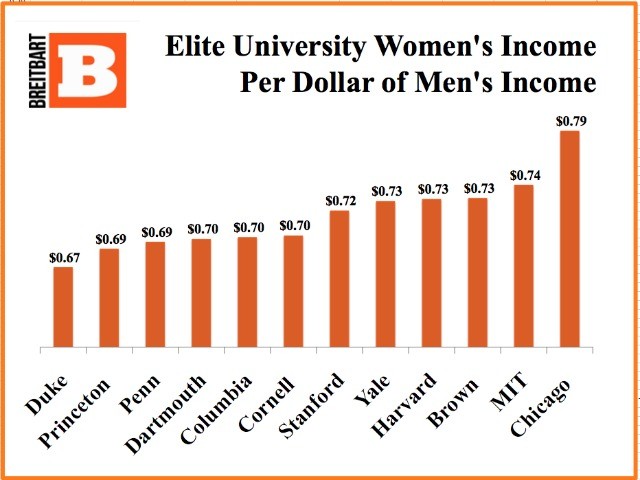 The smallest gap among the ultra-elite colleges is at the University of Chicago, whose women grads earn 79 cents for every dollar its men do. That is followed by M.I.T., where the gender gap has women at 74 percent of men’s income.

On average, the gender gap among the Ivy League and ultra-elite university’s is around 29 cents—meaning women earn 71 cents for every dollar earned by a man.

There may be some consolation in these numbers. While these elite universities may be failing to live up to their progressive, liberal ideals, their graduates tend to do very well financially. And at some of the schools where the gender gap is the widest, women graduates earn significantly more than schools where the gap is narrower.