The California State Senate has passed a bill that would allow schools not to report threats or attacks against employees or officials to law enforcement, despite the ongoing national shock and outrage over the Uvalde, Texas, mass school shooting.

The bill repeals a provision of existing law that requires that “whenever any employee of a school district or county superintendent of schools is attacked, assaulted, or physically threatened by any pupil, the employee and any person under whose direction or supervision the employee is employed who has knowledge of the incident are required to promptly report the incident to specified law enforcement authorities.” SB 1273 would make such reports to law enforcement voluntary.

Democrats are pushing for gun control rather than increased law enforcement at schools, saying the latter removes political pressure for restrictions on firearms and causes harm to minority students. On Tuesday, as part of that pressure campaign, students at some schools in Los Angeles staged walkouts to protest gun violence. 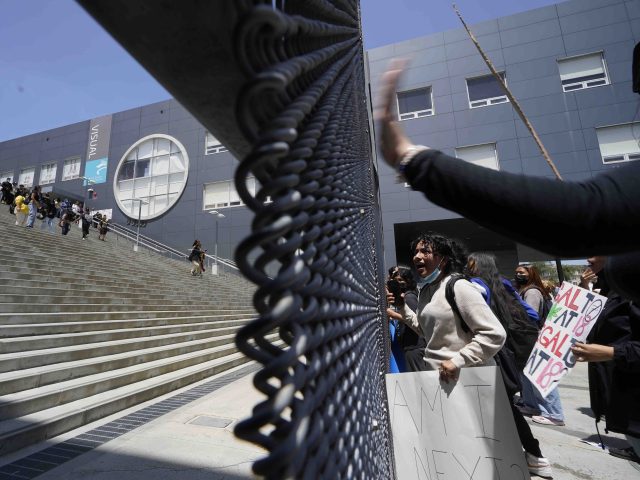 Dozens of high school students at Miguel Contreras Learning Complex, right, protest outside the closed doors of Ramón C. Cortines School of Visual and Performing Arts, asking fellow students locked inside to join them in a walkout in Los Angeles on Tuesday, May 31, 2022. Students walked out of school earlier to protest gun violence and show their support for students and families in Uvalde, Texas. (AP Photo/Damian Dovarganes)

The American Civil Liberties Union (ACLU) has praised the Bradford bill as promoting racial “equity”: “Once students make contact with law enforcement, they are less likely to graduate high school and more likely to wind up in jail or prison. These harms fall disproportionately on students from marginalized groups: Black, Indigenous, and Latinx students, as well as students with disabilities, are disproportionately referred to law enforcement, cited, and arrested” (original emphasis).

Proponents claim the bill will “protect students from unnecessary interactions with law enforcement.”

Sen. Bradford told the Daily Caller: “Our existing system has led to alarming disparities in the type of students who are most likely to suffer these harms. Black students, Latinx students, students of color, and students with disabilities are disproportionately referred to law enforcement, cited, and arrested.”

State Sen. Melissa Melendez (R-Lake Elsinore) delivered a speech on the Senate floor denouncing the bill, citing the 2018 Parkland, Florida, mass shooting, in which the gunman apparently benefited from the Obama administration’s PROMISE program, which discouraged reporting assaults and threats by minority students to law enforcement. “You are asking for a repeat of [Marjorie] Stoneman Douglas [High School] across the State of California.”

In a statement, Melendez said: ““I can’t believe that just two days after the heartbreaking events in Texas, the State Senate would pass a measure making our children less safe at school. … Requiring teachers to report threats of violence in the classroom may be the only warning law enforcement has to prevent a future violent attack.

“Threats of violence deserve the attention of law enforcement. …  Parents should feel safe sending their kids to school. Eliminating the mandatory reporting requirement, by passing SB 1273, makes our schools more susceptible to a repeat of what happened in Texas – and that is unacceptable.”

The bill moves to a vote in the State Assembly, and then to Gov. Gavin Newsom for signature.