Ok, not everybody, just me.

Being four years old at the time, fate cheated me of my consciousness being raised by 1969’s brief burst of Bagism (though I later had my inseam measurement raised by the baggyism of MC Hammer’s 1990s balloon pants craze).

Not to be conflated with the 1970s phenomenon of “people dressed in plastic bags directing traffic” first identified by avocational anthropologist Sir Michael Philip Jagger, Bagism was Lennon-Ono’s satirical skewering of prejudice and quest for “total communication.” How so? People would enshroud themselves in bags and, ergo, solely be judged by their words.

Practically, Bagism had its haters, starting with body language consultants. Theoretically, Bagism had holes, starting with how one’s voice can reveal information–such as, say, if one is a Liverpudlian. Yet, let’s not quibble with this counter-culture concept’s shortcomings and, instead, focus on our 21st Century’s “total communication” revolution’s advances in Cyber-Bagism.

As expertly observed by Bagism.net: “It’s been over thirty years now, and the Internet has become a modern day Bagism… The Internet takes Bagism to a new level. Not only is your appearance masked, but your voice is also hidden.”

Sure, this sounds nuts, but that’s what they said about the cover concept for Two Virgins [NO link provided], and history records how well that worked out. So… problem solved! 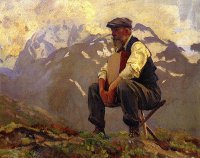 Yes, our social network enables instantaneous communication across the disparate reaches of earth; it advances human knowledge; it eases access to “art films.” But, no, our social network only supplements, it does not supplant, our need for flesh-and-blood discourse.

This isn’t a complaint about how, when beating back a troll attack on Twitter and/or Facebook, the victim can’t read the physical signals or psychiatric records of the avatar/profile picture-lacking miscreant expressing his/her belief you were bred by a failed experiment in inter-special animal husbandry.

This is a reminder that a world without people physically engaging, sharing, shouting, discovering – living and loving – in person equates to viewing John Singer Sargent’s paintings in grayscale.

For those unfamiliar with his work, this would be uncool; and you’re uncultured.

No matter how HD your LCD, online “dating” can’t reveal the subtle, mischievous glint in a candlelit gaze. A sterile Facebook slur with a smiley face can’t replace the rapier thrust of a silent smirk. And, however much one tweets and texts, 140 characters can’t capture the poignant, personal vignettes comprising the rich mosaic of a life well lived.

Ergo, a lament for the loss of the human touch that completes “total communication” and colors our world with the deep hues and intimate tints of human passion against the Manichean canvas of cyberspace. Once these vibrant tones dwine and die like dusk, we will find ourselves benighted, alone in the ashes and dust of our own emotional S–t Bagism.