Liberals need to keep their anti-gun/anti-NRA sentiment alive, and now they are doing it in disguise of honoring the young victims of Newtown, CT.

Charles Krause, former foreign correspondent for numerous publications including The Washington Post, is hosting the exhibit “The Newtown Project: A Call To Arms.” It will be on display starting Jan. 20, which is President Barack Obama’s Inauguration Day. He describes it as “the most politically significant art exhibit in Washington.” He hopes the artists will honor the children, but goes on to say the artists will “provide the President with the creative visual ammunition he needs to win the fight for gun control.”

Here is a direct quote from Krause. (emphasis is mine)

“I believe fine art of this calibre can change perceptions and influence political change,” said Krause. “I’ve seen art and artists influence events in Russia, in China and elsewhere. So I believe it can also happen here with an issue like gun safety and gun control.”

This photo was included in the email. 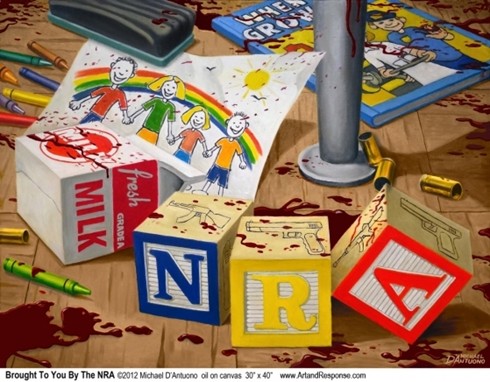 It’s called “Brought to you by the NRA” and was painted by New York artist Michael D’Antuono. Krause describes it as “a direct and unforgettable indictment of the NRA.” He fails to explain how the NRA had anything to do with Sandy Hook and why they should be indicted. Instead, the piece gives the idea that the NRA specifically targets children because of the guns on the blocks. The NRA has never done or said anything to make people believe they want to influence children, hate children, or that they want them dead.

Ironically, Krause’s website says the NRA is calling for armed guards in schools and “they” (no explanation who “they” represents) say more guns and more violence is not the answer. Will he retract this statement because President Obama proposed the exact same thing yesterday. He wants a fund for 1,000 school resource officers at a cost of $150 million.

The tagline should say, “The NRA and President Obama want armed guards in schools, and they say more guns and more violence is not the answer!”

The website has a few more examples, and none of them honor the victims. Instead they target gun control. These examples are gory, horrific and extreme. It appears Krause is more interested in insulting the NRA than remembering the victims because these items do nothing for their memory.

Breitbart News Editor at Large Ben Shapiro said President Obama stood on the graves of the children of Sandy Hook to push gun control. Krause and these artists are standing on the very same ground.