With the summer sale through Steam on hundreds of games going on right now, I felt it was a perfect time to highlight a number of the most interesting games available for gamers to enjoy this summer. The next game to be reviewed in this series is a PC indie hit from last winter that was also recently released on the Playstation 3 and Playstation Vita: Hotline Miami.

Smashing the door open slams it into the guard, sending him sprawling into the middle of the room. I take two steps into the room and cave his buddy’s face in with a lead pipe, then turn quickly and throw my weapon at a third goon charging me from the other side of the room. I miss, and now he’s on me with a knife. A quick punch to the jaw stuns him and drops him to the carpet.

I turn back to the first guard who’s trying to get to his feet and pounce on him, slamming his head into the floor until he goes slack. By the time I climb off him, the third thug has regained his feet and snatched the knife he dropped off the floor. Two steps toward him, then another haymaker aimed at his head, but this time I mistime the swing; he slits my throat in one smooth motion, leaving me to bleed out on the floor.

Hotline Miami, developed by Dennaton Games and published by Devlover Digital, is difficult to categorize. It’s a stealth game that rewards brazenness. It’s a beat ’em up where a single hit can kill you. It’s simple in design but infuriatingly difficult in execution. You could finish the game without ever really having a handle on what the story is about or what you’ve done, yet you’ll build a deep emotional attachment to the main character though he never says a word.

Hotline Miami is an action game played from a top-down perspective using a retro 8-bit graphics style. It’s extremely simple at its core, but the gameplay mechanics open up a wide variety of play styles depending on one’s preference. You assume the role of a nameless hitman residing in Miami in 1989 who receives instructions for his targets through messages left on his answering machine. At the start of each level, your character will wake up in his flop-house apartment and retrieve his orders before leaving in his DeLorean to massacre gangsters inhabiting a number of locations with an assortment of guns and melee weapons, all while wearing different rubber animal masks. 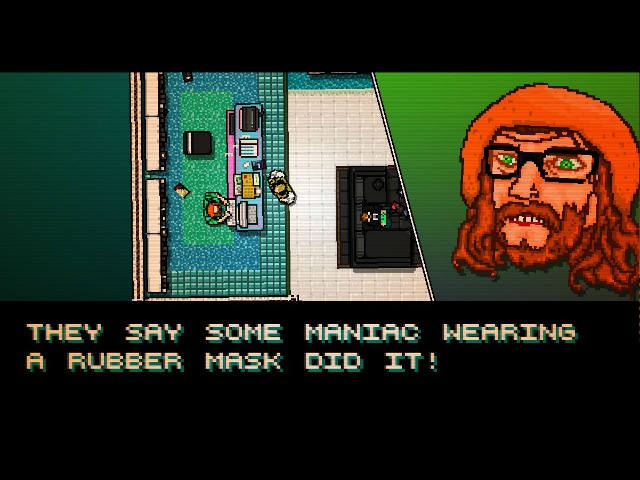 Missions usually consist of moving through multi-tiered environments and killing every enemy in the level before you can return to your car and leave the area. Occasionally you may be tasked with killing a specific enemy or retrieving an item at the end of a level, but the overall goal remains the same: get in, kill everything, and get out.

You’d suspect that with such a straightforward approach the game would grow repetitive, but Hotline Miami‘s fast pace and inventive combat mechanics keep things fresh. The first brutal lesson the game teaches you, in contrast to most other brawlers, is that you are no more durable than the numerous enemies you’ll encounter. One hit from a bat or one shotgun blast to the chest will have you hitting the “Restart” button to reload your last checkpoint. Luckily, the levels are short enough and your progression through them fast enough that it’s never much of a chore to have to start over.

That’s a good thing, because you’re going to die–and often. Your progress relies heavily on trial and error, and the arcade-like scoring system that affords you points based on the frequency and creativity of your kills will have you testing out strategies, dying, and reloading to try over and over to pull off the perfect rampage through the thugs and criminals arrayed against you. In addition to your fists and a wide selection of melee weapons and guns, players make use of a number of unlockable rubber masks that provide varying bonuses for the duration of a mission. These present even more variability in how players approach the game: will you use the mask that makes kicking doors open against enemies a one-hit kill or the mask that extends the time allowed between kills to continue score-boosting combos? 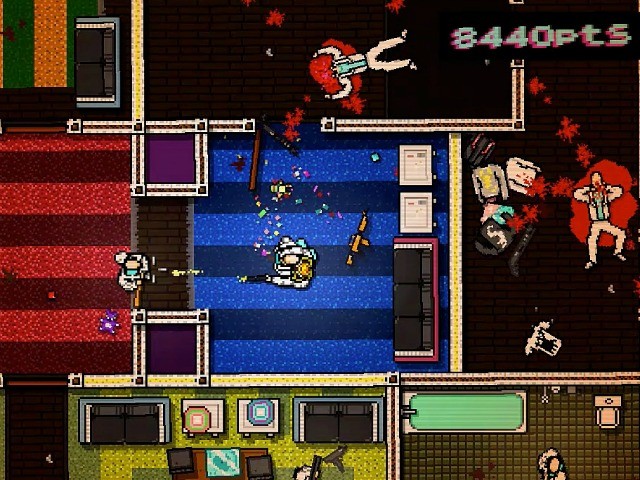 For all the frailty of the main character, Hotline Miami is a game about player empowerment and instant gratification. Encounters with enemies are frantic, deadly, and leave the environments painted with blood and viscera. Any opponent unfortunate enough not to die outright from your attacks are left vulnerable to brutal weapon and environment-specific executions. Get a thug slumped against the wall, and you can put your foot literally through his face with one devastating front kick. Knock enemies down and you can finish them off with sickening blows from the many melee weapons in the game or pick them up and drag them around as a human shield while wielding one-handed guns like pistols and sawn-off shotguns.

In addition to the spectacular gameplay, it’s the twisted, extreme style and story of Hotline Miami that is most likely to draw you in (or, conversely, repulse you). If you’ve seen Nicolas Winding Refn’s 2011 film Drive, it’s hard not to notice the similarities between it and Hotline Miami. The game oozes with the same seedy neo-noir style seen in Drive: the game stars a nameless protagonist distinguished by his jacket and his car; everything is bathed in garish neon; the frantic action is driven by the pulsing ’80s electronica soundtrack, with unnerving synths and thumping bass beats; and the violence is exaggerated to the point where it straddles the line between grotesque and darkly hilarious. The developers even included Refn’s name in the “Special Thanks To” section of the credits. If you’re a fan of the movie, the similarities only serve to further endear this weird, nightmarish title to your heart.

Something very dark and twisted is writhing just beneath the surface of Hotline Miami. Your character, ostensibly a hitman executing Russian gangsters, could just as feasibly be a rubber-masked, cocaine-fueled serial killer following orders to kill from cryptic anonymous riddles left on his answering machine. Which one is the real “you,” the game never explicitly says. Between acts in the story, the protagonist meets with a tribunal of masked strangers in a dark room buzzing with flies, each leveling accusatory questions and statements against the player. 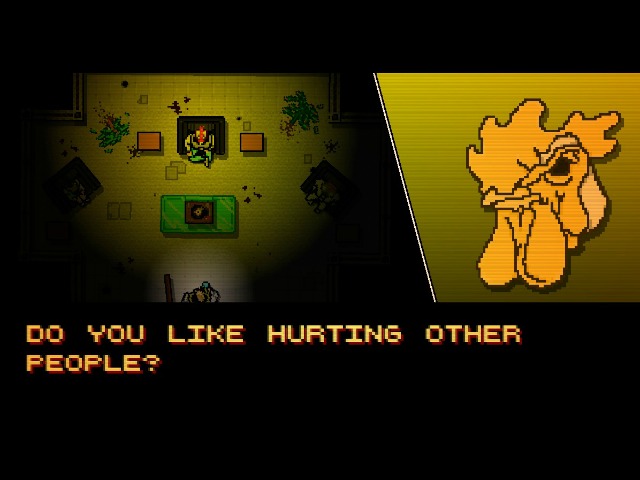 The exaggerated violence of the playable missions begins to bleed into the pre-mission apartment scenes and post-mission denouements where your character stops at various locations after a long day of Mafioso slaughter to grab a pizza or rent a video; the mangled corpses of your victims take the place of the patrons you normally encounter, and encounters with a goofy, shaggy-headed clerk that seems to work at every location you visit become menacing. All of this builds to a moment of sudden and inescapable violence that kicks off a final act of murderous rampages that are suddenly much more personal than before.

So are you the hero, or are you the villain? Players can gain some more insight with a bonus act unlocked after the credits roll, and if they gather pieces hidden in each level that are part of a word puzzle, they can experience a second bonus ending. In the end, really, it didn’t matter to me. The ambiguity of the game’s plot and my character’s motivations only made the story that much more intriguing. At the end of the day, this is a game about a violent man in an equally violent and sinister world trying to do what he has to in order to survive, whatever his motivations may be. It’s that simple narrative at the center of the convoluted and subversive story, combined with the blisteringly exhilarating and rewarding gameplay, that pushed me onward.