Director Gareth Edwards claims his summer blockbuster “Godzilla” is some sort of Global Warming cautionary tale. If that was his intent, unless you want to count the expected and clichéd platitudes about “controlling nature,” he failed miserably (thank God).

Saying such things might be a cynical attempt to win favor with elite critics, but what Edwards actually delivers where it counts — up on the screen — is a spectacularly mounted and unpretentious Godzilla romp that might be the best recruiting commercial for the United States Navy since Tony Scott’s “Top Gun” (1986).

Godzilla opens in 1999 on the morning of Joe Brody’s (Bryan Cranston) birthday. Joe’s a loving husband to his wife Sandra, (a welcome Juliette Binoche) and young son Ford, but a series of tremors affecting the Japanese nuclear power plant he oversees are making him nervous, and no one over there is listening to the “crazy American.”

Cut to 15 years later and still no one is listening. Joe’s still in Japan trying to piece together the mystery. In the meantime, Ford is a grown man (Aaron Taylor-Johnson) living in San Francisco with his wife Elle (Elizabeth Olsen) and a boy of his own. Ford is also a Navy man who specializes in defusing bombs. Just back from what we assume is a deployment, Ford hardly gets reacquainted with his young family before he has to fly to Japan to bail Dad out of jail — again.

Dad, as dads usually are, is eventually proven correct. There is something going on. Worse, the Japanese government and its top scientists are covering it up, trying to control and understand it, and naturally that plan doesn’t work out so well.

I’m not a hater of 1998’s “Godzilla.” I know I’m supposed to hate it or at least lie about hating it. But I’ve always found director Roland Emmerich’s destruction of Manhattan as Ferris Bueller runs around trying to stop him, plenty entertaining and satisfying. In fact, now that my Godzilla whistle has been whetted, I’m probably going to watch it again this weekend. And I’m a Godzilla fan going back 40-plus years  with a pile of Toho DVDs this high. But I’m also pretty easy to please. Cast a spell, Mr. Director, and don’t break it… I’m yours.

Edwards’ “Godzilla,” however, is something else entirely. It’s not just a Godzilla movie, it’s nearly the best Godzilla anyone could possibly make. It’s the “Dark Knight”  of Godzilla movies — the one that catches you off guard, not only with what is possible with the genre but what has been done with it. Legendary Pictures produced (Warner Bros. is the distributor) and you can feel their “Dark Knight” influence all over it.

That doesn’t mean that “Godzilla” is as edgy, dark, or even as mean as Christopher Nolan’s masterpiece. It’s not. And that’s to its credit. “Godzilla” gives us plenty of uncomplicated, old-fashioned heroism; a competent and brave United States Navy from top to bottom (no one suffers from PTSD or suggests we waterboard giant lizards); and a loving, perfectly functional American family.

The special-effects are first-rate. The monster action is as well-choreographed as the 1933 fight between King Kong and the T-Rex, which 80 years on is still The Standard. Edwards also stages a couple of smaller set-pieces (one on a railroad bridge is a real highlight) that effectively bring The Awesome down to a human level. 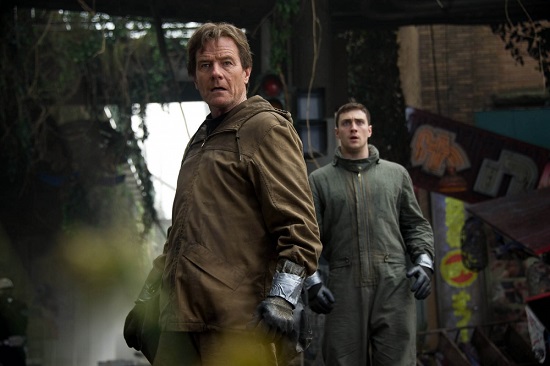 And Godzilla is Godzilla. I don’t want to get into spoilers, but if you’re a franchise fan, you’ll see what I mean. Edwards knows and respects his Toho history, and builds a real character out of a battleship-sized iguana.

Unlike what some other critics have reported, Edwards doesn’t really play “hide the monster.”  He does, though, keep you waiting for what you paid your money to see: monsters using skyscrapers as speed bags. The movie is so good, you actually enjoy the teases (news footage of destruction you did not witness destructed). The anticipation is part of the fun. And all that really matters is if it pays off in the end, and believe me it does.

“Godzilla” has its flaws. Unfortunately the story’s focus does eventually shift away from Joe in favor of the generic in-a-Channing-Tatum-kind-of-way Ford.  Whereas Cranston and Binoche could make you feel something for their characters and relationship with little more than a shared glance, the odyssey Ford is on to reunite with his wife and son doesn’t grab you like it should. In the end it feels like it’s there only because it is supposed to be.

Japanese actor Ken Watanabe is also wasted. When you are dealing with an actor of this presence and caliber, a lot can be done with very little. It wouldn’t have taken much to give Watanabe’s scientist character a little depth, or even some hint of an emotional life. 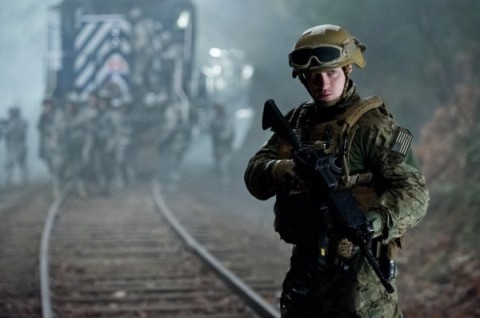 Instead, Watanabe is relegated to the role of the guy whose constantly telling everyone they’re going to need a bigger boat. Characters try to figure stuff out; Watanabe’s eyes grow bigger with a horrific realization; everyone stops to look at him; out comes exposition explaining how the stakes just got bigger. It’s also a little off-key giving this particular scientist this role after we watch him blow it in a big way early on (which is another reason the Global Warming allegory makes zero sense), which forces the American military to take control.

Edwards gives Watanabe’s character a “moment” involving an old pocket watch, but it unfortunately is the only eye-roller of a thud in the whole movie. A much better moment is watching a group of selfless Navy men thank the Lord for the honor of serving a “great nation” as they, without complaint, head into what we’re told is a suicide mission,

Overall, Godzilla delivers, and it delivers all that really matters: As you head out of the theatre and into the night towards your car, you are enveloped in the warm and glorious satisfaction of knowing you have just witnessed all the kick-ass monster action, chaos, and destruction you could have ever hoped to see.

Twice during the climactic battle, the audience I saw it with broke out in spontaneous and enthusiastic applause. They couldn’t help themselves, and neither could I.

Go. Now. Take your kids and the kid in you.

P.S. If you’re intent on looking for a political message, here in America, only Barack Obama’s Hawaii, Harry Reid’s Nevada, and Nancy Pelosi’s San Francisco are destroyed. Some kind of sub-conscious hostility towards the destructive leadership of the Democrat Party…? Why not.