“The Hunger Games: Mockingjay – Part 1” is meant to be a placeholder, and does feel like one. As a standalone, the movie is something of a disappointment. Somber in tone, lacking in the kind of action we’ve come to expect, ugly to look at, and burdened with a story that mostly takes place in an underground bunker.

More than once I suffered a “Matrix-sequel” flashback.

One important difference, though, is that “Mockingjay – Part 1” succeeds at its primary job, which is to very much make you want to see “Part 2” (which arrives next year). 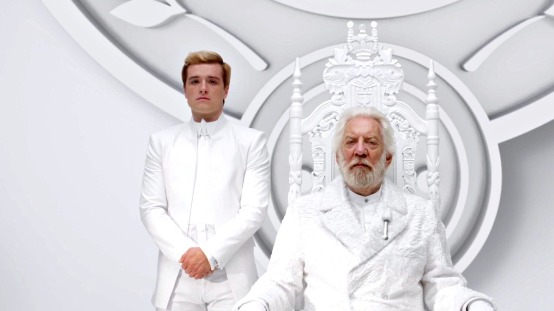 “Mockingjay” picks up right where “Catching Fire” left off. Having just been scooped out of the Quarter Qwell arena, Katniss (Jennifer Lawrence) wakes up in the aforementioned underground rebel bunker, which is hidden deep below District 13. Physically she’ll heal, emotionally, Katniss is a wreck. The Capitol and its sinister President Snow (Donald Sutherland) have snatched Peeta (Josh Hutcherson), her boyfriend and Hunger Games teammate.

Oh, and the fate of mankind now rests on her young slender shoulders.

Through physical prowess, instinct, resourcefulness, and bravery, Katniss survived two rounds of the Hunger Games, a bread and circuses fight-to-the-death reality show staged annually by The Capitol and broadcast throughout all of Panem. Survival was the easy part. Thanks to her public acts of defiance against The Capitol and Snow, Katniss is now something bigger than a hero: she is the sole symbol of hope to an enslaved nation teetering towards rebellion.

Being the Mockingjay is not a responsibility Katniss wants. Our reluctant revolutionary is worried about her family, paralyzed with anguish over Peeta, and still a teenager for crying out loud. The process of being an effective symbol is also a manipulative one involving “propos,” propaganda videos manufactured by Plutarch Heavensbee (the late Philip Seymour Hoffman), who is also the chief strategist for President Coin (an icy, strong-willed Julianne Moore).

Once Katniss gets a look at what Snow did to her home District, her mind begins to change. Unfortunately things only get more complicated when Peeta begins to speak out against the rebellion in a series of the Capitol’s own propaganda videos. Another complication is Gale Hawthorne (Liam Hemsworth), now a rebel soldier and sole source of comfort for Katniss.

This ongoing love triangle remains the weakest subplot in the franchise. There is zero chemistry between Katniss and the bland, simpering Peeta. To be perfectly honest, she’s too much woman for him — more like a babysitter than a girlfriend. I have never bought into their relationship and this makes the emotional torture she suffers hard to swallow. You’re not going to find me running around wearing a “Team Gale” t-shirt anytime soon, but at least he’s taller than Katniss.

All the flash and kitschy fun of the first two films is stripped away. There are no colorful visits to the Capitol. The franchise’s many colorful characters also suffer from drab makeovers: Effie Trinket (Elizabeth Banks) is stuck in a jumpsuit, Stanley Tucci’s flamboyant Caesar Flickerman is seen only from the chest up, and Woody Harrelson’s under-used Haymitch Abernathy has been forced on the wagon.

This is also the first “Hunger Games” without Hunger Games. There isn’t much action at all, in fact, and what little there is isn’t notable. 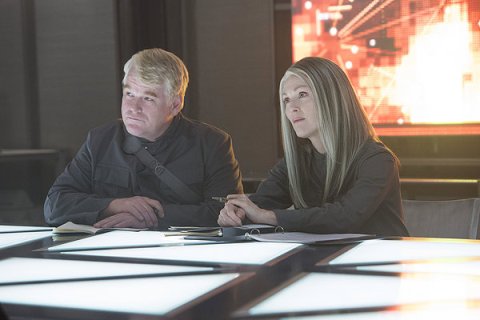 What is special is Jennifer Lawrence. Although Katniss is too often sidelined from the action and mopes through almost all 123 minutes, without saying a word, the stunning Lawrence communicates the coiled spring that lives inside Katniss, and that’s an explosion we want to see. Another unspoken subplot is her simmering distrust in the rebel leaders. Will the new boss look like the old boss?

Witnessing that explosion and learning the answer to that question will have to wait until next year.  And “Mockingjay – Part 1” (the first half of the concluding chapter in Suzanne Collins’ insanely successful trilogy) certainly builds anticipation.

Once the franchise ends and can be judged in full, “Mockingjay – Part 1” could be remembered as the best entry in the franchise — the one that slowed down to spend time with the characters and lay the pipe required to properly pay off The Big Finish. We’ll see.

You won’t be bored, just a little antsy. If nothing else, you get to witness a number of truly great actors elevate commercial material into something bigger simply by taking it seriously.

Regardless, for some reason this feels like the exact right time for a movie about a revolution against a lying, lawless president.