Outside the context of the cyber-terrorist and terrorist-terrorist threats that almost killed it, “The Interview” is par for the Seth Rogen course: crude, cruder, sporadically funny, and ultimately not worth the 112 minute investment. Give Rogen credit, though, he didn’t wrap his premise around a fictional country and dictator. He went for the jugular.

The country, of course, is the communist hellhole prison of North Korea, the dictator is Kim Jong-un, and the premise is two idiots scoring a television interview with the Supreme Leader by agreeing to ask only the questions supplied to them by the North Korean government. This easy-peasy plan to make history by completely selling-out goes sideways when the CIA demands the idiots use the opportunity to assassinate Kim Jong-un.

Although smoothly directed (by Rogen and Evan Goldberg) and efficiently structured, even for a broader-than-broad farce, the premise, characters, and individual scenes are awfully hard to buy into. If nothing else, the movie fails to create a world where you believe the spyjinks taking place inside that world.

James Franco plays Dave Skylark, the host of the kind of celebrity tabloid television talk show where Eminem reveals he’s gay and Rob Lowe reveals he’s bald. An eternal optimist with a double-digit IQ, Skylark can find a way to frame every relationship around “Lord of the Rings'” characters and is eternally tuned for one thing: seeking out pleasure in the form of drugs, sex, and fame. 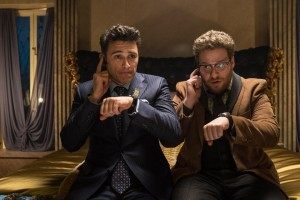 Rogen is Aaron Rapoport, the show’s producer. He’s supposed to be the sober, smarter of the two, but that doesn’t stop him from making and/or agreeing to stupid ideas throughout. Not for a moment did I believe Aaron would agree to interview Kim Jong-un, much less go along with the assassination.

Generally, in these kinds of buddy comedies (“Some Like It Hot,” Martin and Lewis, Hope and Crosby, Abbott and Costello) it’s the smart smoothie talking his dim-bulb partner into trouble for some selfish reason (girls, money). As crazy as the situation might be, with that particular set-up you can at least suspend some disbelief. For whatever reason, and to the detriment of the story’s foundation, “The Interview”  flips that premise.

Situations also defy credulity. Never for a moment did I believe Rogen could, sight unseen, jump out the window of the North Korean leader’s compound to retrieve a package sent via CIA drone. “The Interview” wants us to believe Kim Jong-un is a paranoid fanatic … who doesn’t put bars over windows or place listening devices in guest rooms or watch his guests 24/7. This isn’t farce, it’s lazy writing.

While, as I mentioned above, the laughs are sporadic, the gross-out humor is non-stop and punishing and gratuitous. The violence is also surprisingly over-the top, but not as over-the top as Franco’s performance, which wears thin rather quickly. The heart and pathos needed to sustain a character this one-dimensional and dumb just isn’t there. 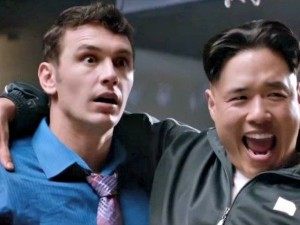 Where “The Interview” does work is in its brutal beatdown of North Korea and the man who runs it. One of the story’s pleasant surprises is Randall Park’s charismatic performance as Kim John-un. Portraying the Supreme Leader as a full-fledged human being instead of an evil robot single-handedly saves the second act and adds emotional weight to the eventual reveal of who he really is.

Rogen’s character talks of North Korea’s “concentration camps, famine, and firing squads,” and the movie makes clear that the North Korea revealed to us and our protagonists is nothing more than a false front. With a $45 million budget, though, you expect to catch a glimpse of these atrocities. You don’t.

Unless I missed it, the word “communism” is never used, and I’m pretty sure Rogen let’s Kim Jong-un take an unanswered (and wildly out-of-context) swipe at America’s incarceration rate.

There’s also an unrelenting gay subtext in almost everything Franco’s character says and does. Skylark is a shameless womanizer but apparently this is the length satirists now have to go to in order to gently mock homosexuality without GLAAD putting you in a North Korean-style re-education camp.