Actor Dean Cain, best known for his role as Superman in the iconic hit TV show Lois & Clark: The New Adventures of Superman, has revealed he is “on the gamers’ side” in the GamerGate movement.

Having defeated Lex Luthor in the 1990s, Cain has now thrown his hat in the ring against a nefarious new super-villain: the rainbow-haired social justice warrior. On Steven Crowder’s show earlier today, Cain & I discussed the threat to artistic freedom posed by pearl-clutching activists whose fact-free rants about sexism and violence have infuriated both gamers and game developers.

“I’ve been playing games, all these types of games, my entire life. I’ve also shot the real guns and done the real thing, and I promise you, as my son has, there is no correlation,” Cain said of accusations by social justice warriors that games breed toxic behavior. “I don’t buy it for a second. If someone’s pre-disposed to do something, the game is not going to kick them over the edge.”

Cain went beyond a simple critique of social justice, however. He decided to engage what my internet friends call “maximum over-rustle” by defending the GamerGate movement, even though he knows its supporters have been unfairly smeared with allegations of misogyny.

GamerGate supporters advocate for higher ethical standards in games journalism and reject the advances of feminist critics who say video games are overly violent and sexist and have a deleterious effect on the real world. They have been wrongly accused of rape and death threats by far-left social activists and bloggers.

A number of fantasy and sci-fi actors, taken in by poor reporting on the issue, have condemned the consumer movement. But Cain is the latest in a roster of prominent figures in the entertainment industry breaking ranks to condemn the rising tide of cultural authoritarianism.

Cain is also a bona fide gamer, and he shared with me, exclusively for Breitbart readers, a screenshot of his Alliance Paladin avatar from World of Warcraft. 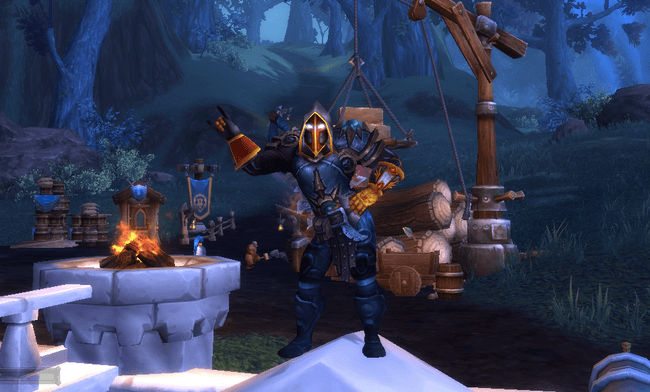 It appears that the cook-up allegations of threats, harassment and woman-hating, which do not stand up to inspection, are falling apart. If Adam Baldwin, Eli Roth and others are serious about their efforts to push back against social justice warriors, they won’t have to look very far for additional supporters now.

As regular readers will know, the mere mention of GamerGate is kryptonite for so-called SJWs – reason enough for right-thinking people to support it. Now closing in on its one-year anniversary, the hashtag has become a rallying cry for everyone with an objection to hand-wringing moral panickers.

If you want to signal your opposition to hectoring, bullying, public-shaming political correctness, there is no faster way to do it than go on Twitter and type “I support #GamerGate.” That’s what Cain did on Crowder’s show today.