Latino organizations, including the Hispanic Federation, the Labor Council for Latin American Advancement (LCLAA), and the League of United Latin American Citizens (LULAC), are asking members to march roughly seven blocks from Trump Tower to NBC’s Rockefeller Center in New York City, at 6 p.m. ET on Saturday, Nov. 7, ahead of Trump’s appearance on SNL.

“There has been strong opposition to Trump hosting SNL this Saturday. Some individuals have suggested that we should not prevent Trump from hosting SNL but that instead we should voice our opposition by not watching,” says a press release from the group.

This view misses the point. Trump has targeted Latinos with his racist and xenophobic remarks and his rhetoric is causing real harm to the Latino community. We cannot allow him the time nor a platform such as SNL to advance such views.

A representative for LULAC told Breitbart News Friday that the group hopes the protest will lead SNL executive producer Lorne Michaels to reconsider giving Trump “a platform to advance his racist and xenophobic views.”

The office of LULAC communications director Brent Wilkes added that the “Marcha” hopes to “bring attention to the more than 50 million Latinos who work hard to provide for their families.”

“[Trump] being allowed this platform is a huge slap in the face to us. Trump and his comments should not be a part of mainstream comedy,” LULAC told Breitbart in a statement.

NBC has shown no signs of dropping Trump as the host of Saturday night’s show. The activists plan to tweet during the show, using the hashtags #RacismIsntFunny and #BastaTrump.

A similar protest occurred outside of 30 Rockefeller Center on Wednesday for a “Dump Trump” rally, where Juan Escalante, a staffer with immigration reform group America’s Voice, delivered a petition to NBC with more than 500,000 signatures. 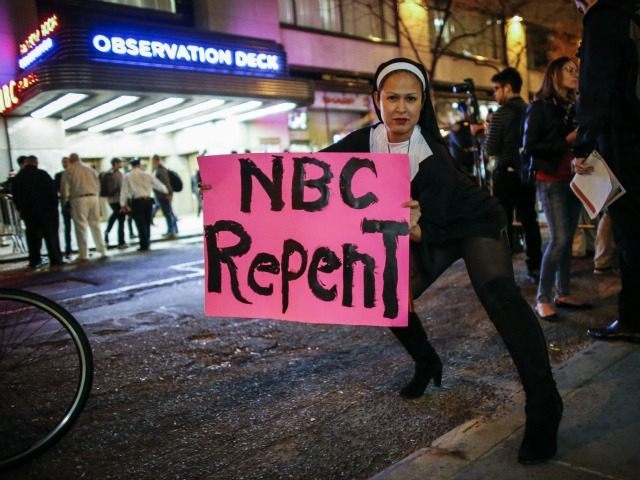 A woman dressed as nun holds a poster as she poses for a photo during a protest in front of NBC studios. (Kena Betancur/AFP/Getty Images)

Luke Montogmery, the man behind a now viral video featuring Latino children yelling obscenities at Trump, has also offered a $5,000 bounty to anyone who disrupts Trump on SNL by yelling, “Racist!”

Saturday Night Live will air on NBC at 11:30 ET, as scheduled.