Actress Jennifer Lawrence is raffling off a chance to fly out to California to go wine-tasting with her in exchange for a donation to a non-profit working to eliminate corruption in politics.

The 27-year-old Oscar-winning American Hustle actress partnered with contest company Omaze to raise funds for Represent.us, a bipartisan organization working to get money out of the political process.

“Hey, you. You want to help stop political corruption in America? And drink a ton of wine? Well, you’ve come to the right video,” Lawrence opens a YouTube promotional video for the fundraising campaign.

“It’ll be great,” the actress says. “We’ll hang out, drink some wine, talk politics, drink wine, maybe we’ll call your ex, maybe we’ll call my ex, who knows? The point is, we’ll have fun. And I know what you’re thinking: ‘Jen, why would I go wine tasting with you? You probably don’t even know the difference between a review of a great wine and a review of one of your movies.’ Well, that’s rude. And weirdly, really specific.”

Lawrence then proceeds to play the game, reading off a number of reviews and then attempting to guess whether they might be of a specific wine, or of one of her movie roles.

“Full-bodied, strongly grounded, simply sensational,” an incredulous Lawrence reads. “I hope that’s about a Cabernet, and not my breasts. No? Somebody called me full-bodied? It’s a movie review about Joy.” 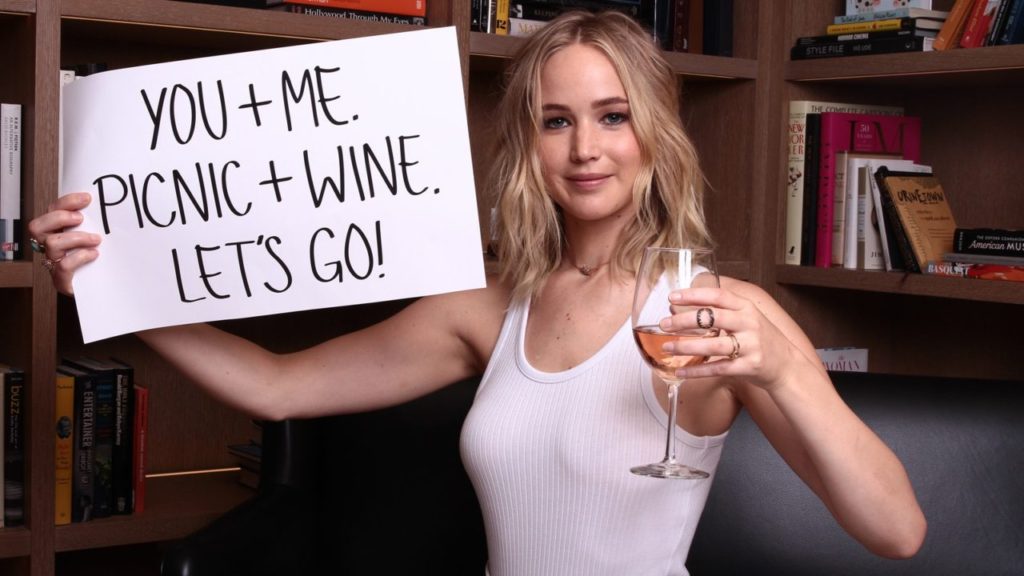 Those interested in the contest can get 100 entries in exchange for a $10 donation to Represent.us, with the winner getting flown out to California for a wine-tasting and picnic with Lawrence and accommodations in a four-star hotel.

Lawrence has been more outspoken about her political beliefs in recent weeks, telling Vogue magazine this month that America must move past its “divide and anger” and that citizens must “protect the foundation of this country, and acceptance.”

Earlier this week, Lawrence took to social media to urge her 16 million followers to post pictures of protesters at the white nationalist rally in Charlottesville, Virginia, and to publicly identify them.