This year’s show marks the first time in 15 years that the Grammys are being held in New York.

Jay-Z leads all artists with eight nominations this year, and he’ll look for a big night for his album 4:44 amid his Twitter feud with President Donald Trump. Kendrick Lamar follows with seven nominations while pop/funk phenom Bruno Mars has six nods.

The Grammys have recently become as much about the performances as the actual awards, and viewers can expect some high-profile and politically-charged performances from Maren Morris and a slew of country stars, who will perform a tribute to victims of gun violence at musical events this year, as well as from Kesha, who is expected to perform her hit “Praying” along with a full chorus.

Stars are also wearing white roses to this year’s show as a statement of solidarity with victims of sexual abuse, and host James Corden has promised the show will feature some prominent #MeToo-focused moments.

Follow along as the Breitbart News Big Hollywood team brings you live updates from the show tonight, including winners, commentary and analysis, and of course, the evening’s best fashion, courtesy of John Binder.

All times Eastern. Latest updates at the top.

9:35 a.m. (Monday) – Initial ratings for this Grammys broadcast could be “an all-time low.” Via Deadline:

With a 12.7/21 in metered market ratings, the Recording Academy’s big hootenanny was also way down from the early numbers for the LA-based February 13, 2017 59th annual show. By way down, I mean a just over 20% decline from last year to what looks to be an all-time low for the ceremony.

The show was probably even more political than it was last year. Just scroll down this livewire to see all the best moments.

Come back tomorrow for more updates, follow-ups, and analysis from the Big Hollywood team.

With eight nominations going into the night, Jay-Z was completely shut out, failing to win in any category.

This should be the last performance before Album of the Year.

Check Twitter to find out who they inevitably left out this year.

10:29 p.m. – SZA performes “Broken Clocks.” This, the Elton John/Miley Cyrus duet, and Bruno Mars are the performances of the night.

10:11 p.m. – Jokes: James Corden’s parents snuck out and saw Hamilton in the middle of the show.

9:58 p.m. – John Legend, Cher, Snoop Dogg, Cardi B, and DJ Khaled do a segment where they read out excerpts of Fire and Fury, which James Corden jokes will be a contender for Best Spoken Word Album at next year’s Grammys.

This may break the record for Most Woke Grammys Ever.

As Jerome just helpfully pointed out, the just-released music video for the song featured the KKK visiting Trump’s White House.

9:42 p.m. – Camila Cabello wades into the immigration debate while introducing U2.

“This country was built by Dreamers, for Dreamers, chasing the American Dream.”

“I’m here on this stage tonight because just like the dreamers my parents brought me to this country with nothing in their pockets but hope. They showed me what it means to work twice as hard and never give up, and honestly, no part of my journey is any different from theirs. I’m a proud Cuban-Mexican immigrant, born in eastern Havana, standing in front of you on the Grammy stage in New York City, and all I know is, just like dreams, these kids can’t be forgotten and are worth fighting for.”

9:25 p.m. – Maren Morris, Eric Church, and the Brothers Osborne perform a cover of the Eric Clapton classic “Tears in Heaven,” dedicated to the 58 people who lost their lives in the shooting at a country music concert in Las Vegas last year.

9:17 p.m. – More on Kendrick Lamar’s “Jay for President” shout-out from his Best Rap Album acceptance speech earlier in the night, from Jerome Hudson.

Bruno Mars is just an incredible entertainer and showman. Probably the only great performance of the night so far.

Binder on Cardi B: Cardi B attempted to go for a 1990s-inspired hip-hop performance ensemble, but looked more like a beach ball than Salt-N-Pepa. 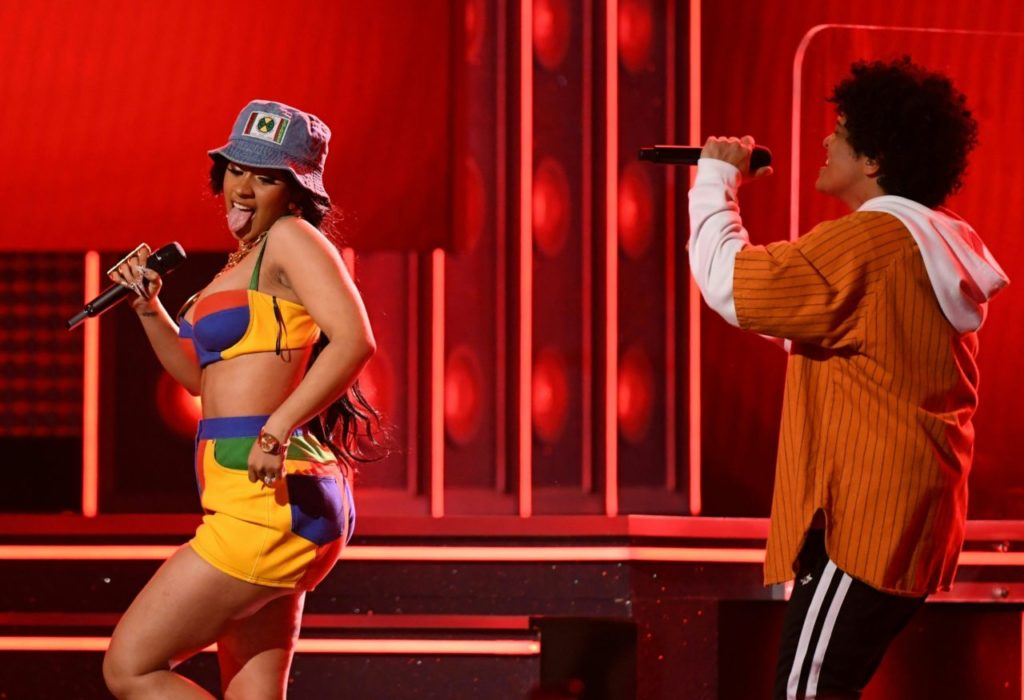 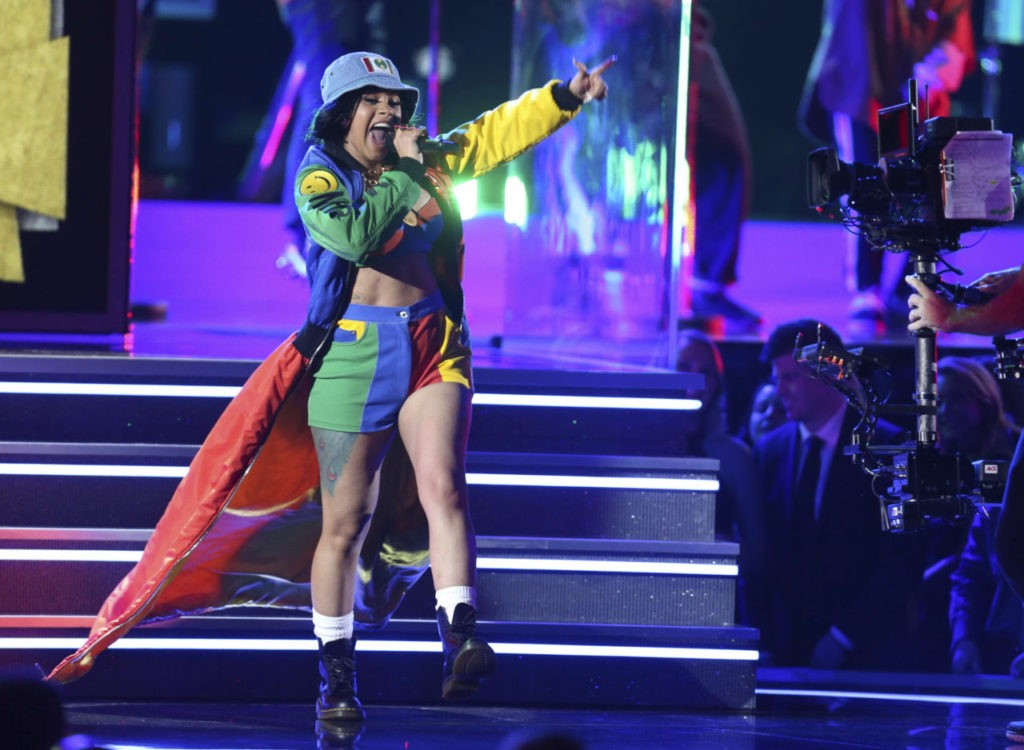 This is actually pretty funny. The subway riders are pissed off.

Old lady: “I don’t want to be on your stupid YouTube video.”

Video to come when available.

Introduces the next performer, Album of the Year nominee Childish Gambino, who plays his song “Terrified.”

8:23 p.m. – Jerome Hudson: “This ‘Despacito’ performance comes off as antithetical to the Time’s Up movement.”

Photos from the performance: 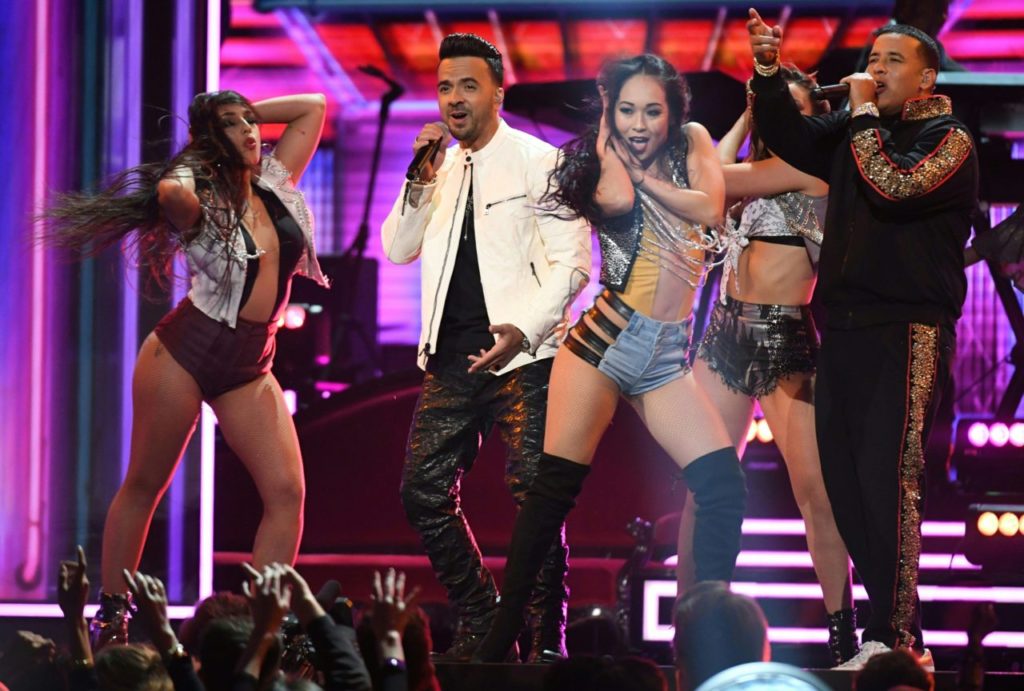 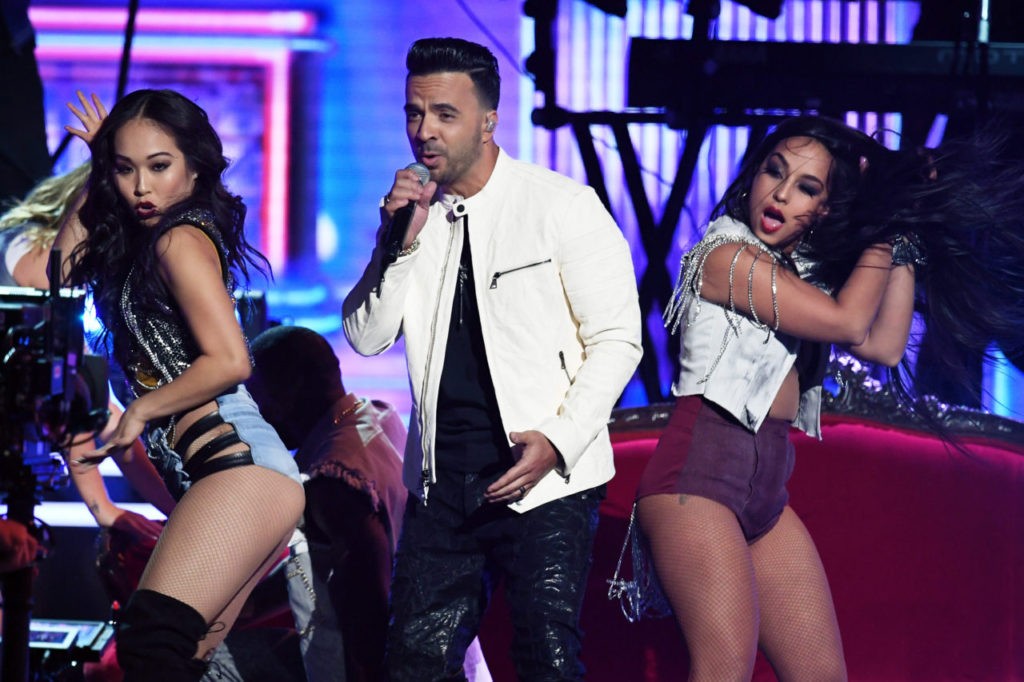 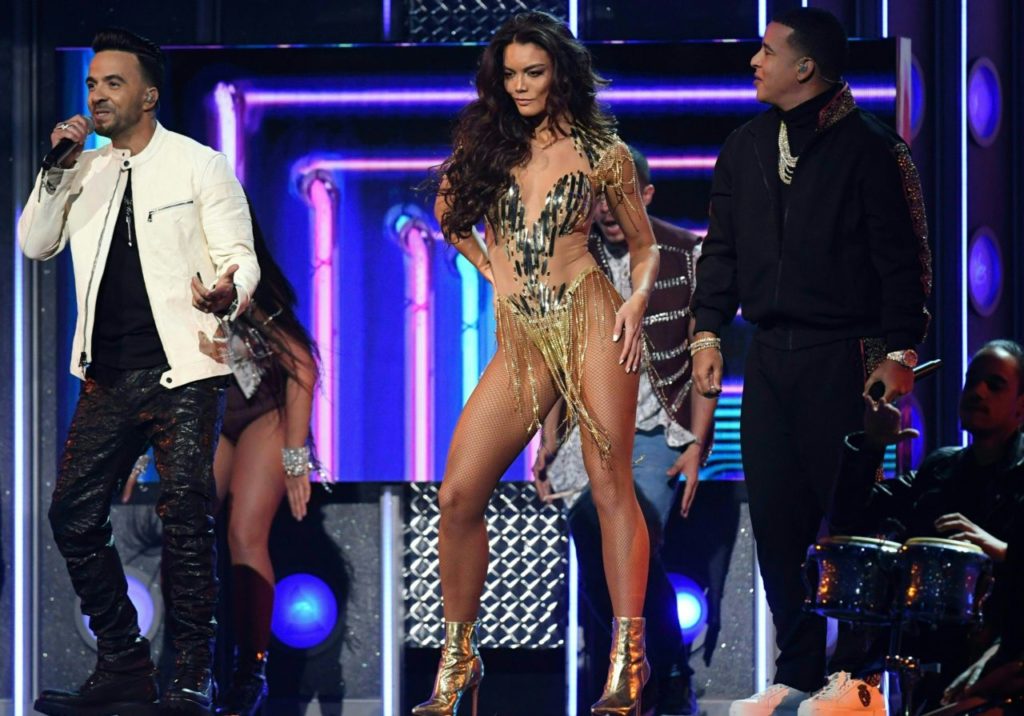 “Do whatever you want, the world is basically over anyway.”

Winner: Ed Sheeran, “Shape of You.”

Sheeran’s not at the show.

8:11 p.m. – Gary Clark Jr. and Jon Batiste perform “Ain’t That a Shame” and “Maybellene” in a tribute to Chuck Berry and Fats Domino.

“Concrete jungle where dreams are made of, that’s just something I made up.”

Introduces the next performer, Sam Smith.

7:38 p.m. – Lady Gaga up now, performing “Joanne” solo at the piano. Segues into “A Million Reasons.” Gives a brief shout-out to the Time’s Up movement.

7:35 p.m. – Album of the Year nominee Kendrick Lamar kicks off the show with an American flag backdrop and marching backup dancers in Army fatigues.

As does Dave Chappelle.

“I’m Dave Chappelle. And I just wanted to remind the audience that the only thing more frightening than watching a black man being honest in America, is being an honest black man in America.”

Simulated gunshots as the backup dancers hit the ground and Lamar concludes his performance.

#MileyCyrus looks BEAUTIFUL on the #GRAMMYs red carpet!!! Her performance with #EltonJohn is one of the most anticipated performances of the night… can't wait! pic.twitter.com/vh6O0aiah6

“Where do you see yourself in five years?”

“Where do you see yourself 5 years from now?” #GRAMMYs pic.twitter.com/mDJlXFXc8J

7:00 p.m. – Thirty minutes to showtime. Stretch your legs, take a smoke break, hit the bathroom, grab some chips and dip.

This one’s scheduled to go a full 3.5 hours.

6:49 p.m. – Childish Gambino, Jay-Z, Kendrick Lamar, Bruno Mars, and Lorde are vying for tonight’s top prize, Album of the Year. The Washington Post reports that this marks the first year in Grammys history that a white male is not nominated in the category.

WaPo: For first time in Grammy history, a white man isn’t nominated for album of the year.

6:45 p.m. – Binder Fashion Update: Hailee Steinfeld arrives at the Grammys in a white dress with a middle-slit that reveals her purple, iridescent thigh-high boots.

When asked how she was feeling about being at her first #GRAMMYs, @iamcardib gave the most Cardi answer ever: pic.twitter.com/2SbXAMTTqJ

6:38 p.m. – A view inside the Garden before the festivities get under way, courtesy of Variety‘s Cynthia Littleton.

And we’ve got to get ourselves back to the Garden. Awaiting the start of #GRAMMYs at Madison Square Garden. Funny to see black tie crowd eating stadium food in the corridors. pic.twitter.com/KPVe8RszLm

6:28 p.m. – Elton John arrives on the Grammys red carpet in a colorful beaded suit and flashy sunglasses, a signature of his.

Sir Elton recently announced that his upcoming world tour would be his last. 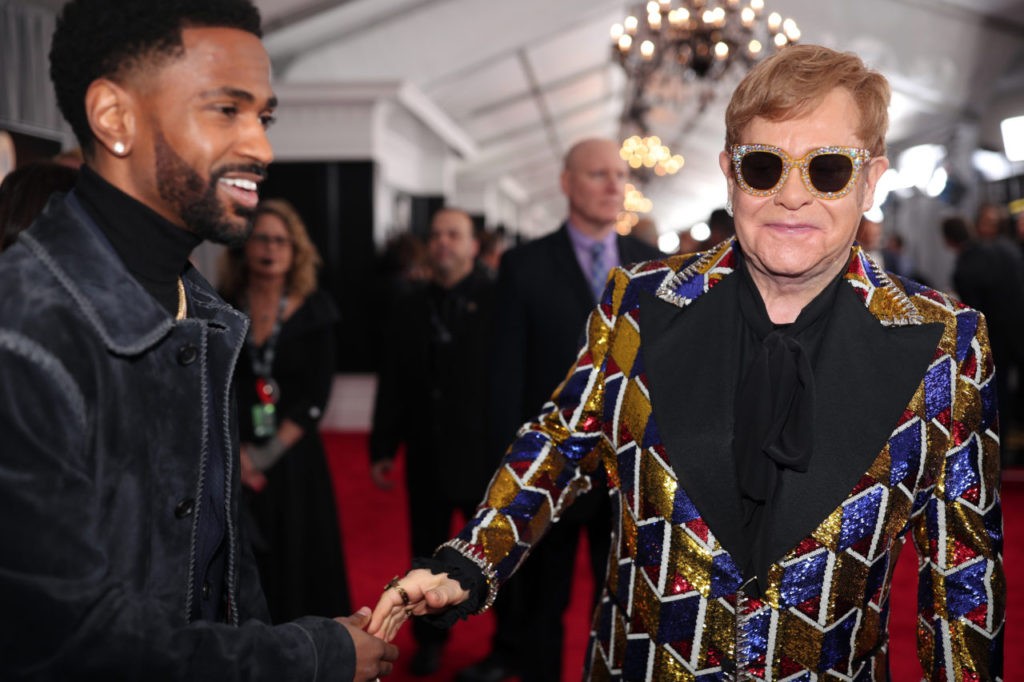 6:22 p.m. – Singer Joy Villa made a strong pro-life statement with her red-carpet arrival, donning a dress with a multi-color womb and accessorizing with a clutch that reads, “Choose life.”

More on this from John Binder here. 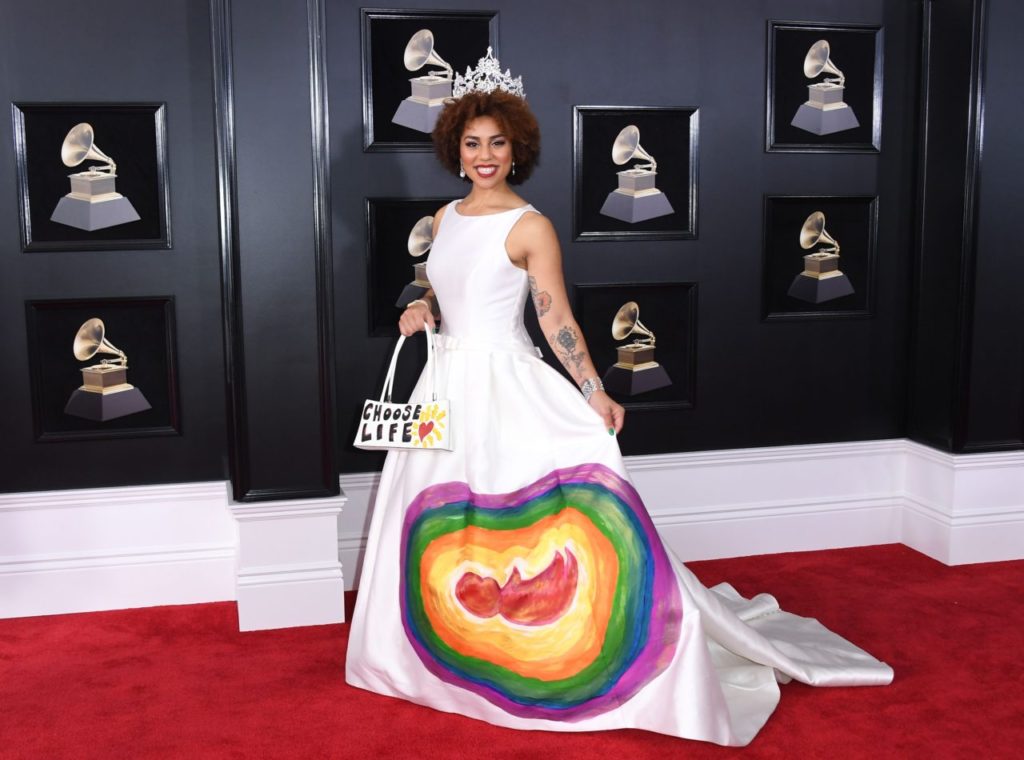 6:15 p.m. – We’re up and running with red-carpet arrivals, and John Binder’s already picking the fashions sure to end up on tomorrow’s Best Dressed list.

Lana Del Rey arrives in a Gucci gown with a crowd of stars sprouting from her dark hair.

Angel #LanaDelRey wearing a star halo at the #Grammys 💖 | 📷: @gettyimages

No surprise here: #LadyGaga went full-drama at the #Grammys—and she nailed it. 📷: @gettyimages

Kelly Clarkson arrives with a white rose in her hands. Grammy attendees were requested to wear a white rose to raise awareness for sexual harassment.

.@kelly_clarkson is looking absolutely stunning tonight. The queens are delivering tonight at the #GRAMMYs 🙌 pic.twitter.com/IWghgoAksW

.@JanelleMonae in @dolcegabbana at the #GRAMMYs LUUUUVHUH. More red carpet photos and commentary later on our site. pic.twitter.com/9UrcpjFDVU