The sign — placed under an actual “Right Turn Only” sign on the main West Hollywood drag — went up on Tuesday morning, according to the Hollywood Reporter. 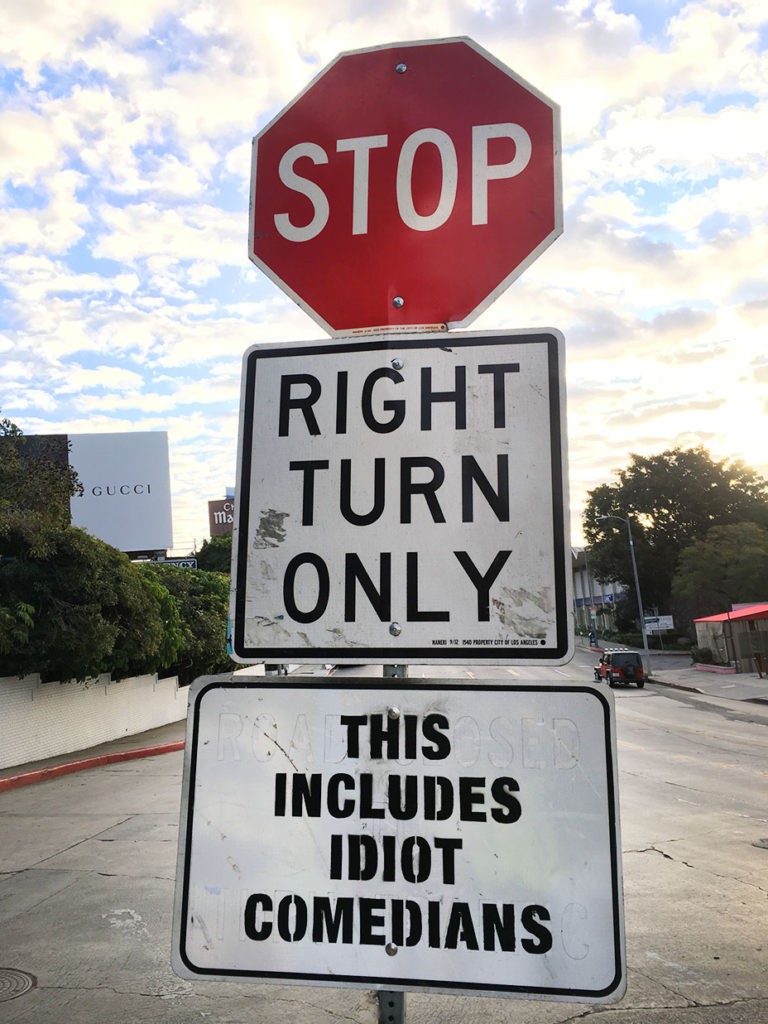 According to TMZ, Kimmel got into a car wreck earlier this month after either failing to see or otherwise disregarding the “Right Turn Only” sign at the intersection in front of the Chateau Marmont hotel.

In a statement to THR, Sabo said he targeted Kimmel for mockery based on a recent comment the late-night host made during an episode of the progressive podcast Pod Save America.

“It just so happens that almost every talk show host is liberal and that’s because it requires a level of intelligence,” Kimmel said this month, as Breitbart News previously reported.

“Obviously, his intellect wasn’t so sharp as to keep him from nearly killing someone,” the street artist told THR.

Sabo regularly skewers celebrities and liberal politicians with his street art, and usually posts photos of his work to his Twitter account.

Most recently, the artist took aim at last month’s Golden Globe Awards with a series of posters calling out the entertainment industry’s ongoing sexual misconduct scandal. One poster featured Globes host Seth Meyers next to the phrase, “We All Knew,” while another featured a deified Harvey Weinstein along with the word “God,” a reference to Meryl Streep’s use of the word to describe the disgraced producer during an acceptance speech at a previous Globes ceremony.

Ahead of the Oscars last year, Sabo mocked what he called Hollywood’s “unwatchable movies.”

He’s also used his art to go after Hillary Clinton, Leonardo DiCaprio, and Kim Jong-un, among numerous others.

Kimmel is set to host the Oscars for the second time on March 4.