The billboard, which depicts a car crashed into the side of a building, was decorated with a cutout of O’Rourke holding a bottle of liquor. A spoof of his campaign sign was also placed on the billboard, reading, “Beto Runs.”

O’Rourke was arrested in 1998 for driving drunk and allegedly trying to flee the scene. His charge was dismissed after he took a court-ordered program.

When the issue of his drunk driving arrest came up in his 2018 campaign for a Texas Senate seat, he turned it into a lesson in white privilege.

“I’ve made the most that I could with my second chance and my opportunity,” O’Rourke said.

“What I do know is that as a white man in this country, there is a privilege that I enjoy that many African-American men and women do not.” 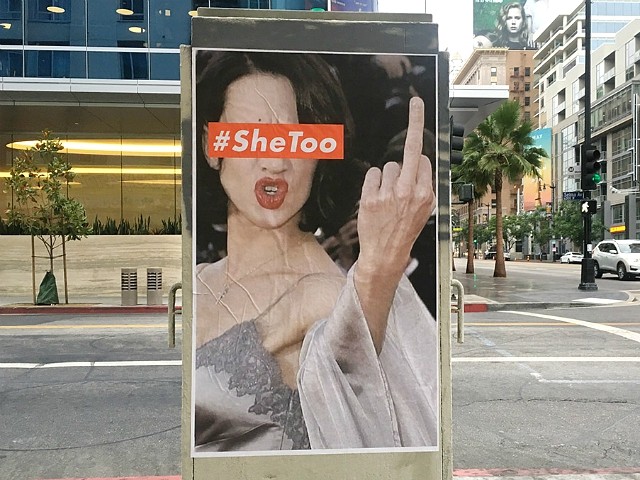 Los Angeles street artist Sabo plasters large posters of embattled actress and #MeToo activist Asia Argento, who has reportedly settled with an accuser who claimed she sexually assaulted him when he was underage. (Photo courtesy unsavoryagents.com)

The artist also went after Maxine Waters in October for her embrace of rhetoric asking her followers to publicly harass the Trump administration.