Writer-director S. Craig Zahler’s Brawl in Cell Block 99 (2017) caught my attention like no movie in a long while. Outside of being a superbly crafted and satisfying grinder, it was the smaller elements that grabbed me, most especially the abortionist.

Vince Vaughn plays Brad — sorry, Bradley —  a retired boxer, drug dealer, and substance abuser who goes straight until straight nearly costs him the thing he loves most: his wife (Jennifer Carpenter). A miscarriage and barely tolerable existence on a tow-truck driver’s salary (a job he just lost) has undermined the marriage to where she’s having an empty sexual affair.

Faced with the intolerable prospect of losing her, Zahler has Bradley make the kind of contradictory decisions that create unforgettable characters. In the most Christian way imaginable he forgives her completely — and in order to save the marriage he returns to drug running.

Things improve. Everything’s cherry. Nice suburban house. Nice cars. The wife’s pregnant. The marriage is solid. But Brad’s moral code destroys everything when a deal goes sideways. He could walk away. He could go straight home, resume his life. No one would blame him. Instead, his decency forces him to take the kind of action that drops him into the worst possible situation. On top of seven years in prison, the cartel wants him dead, and this is where things get interesting…

The existential threat held over Bradley is an abortionist, is the horror of having his unborn baby girl, a child he already adores, cut into small pieces and mailed to him. In Cell Block 99, the unborn are not a “fetus” or a “clump of cells,” they are a blessed event and in its own pulpy way, we are forced to come to terms with the fact that abortion truly is murder.

There are even smaller things. Bradley’s proud to hang Old Glory over his house and on top of being a cool, stoic badass, he listens to Christian rock.

Finally, there’s Bradley’s drug dealer-boss Gil (Marc Blucas), an upper middle-class white guy who, upon introduction, matter-of-factly fires off a series of politically incorrect statements about mineral water being “gay” and Mexicans always traveling with big families. And yet, Gil doesn’t seem to say these things out of a racial malevolence but rather for the pleasure of being an outlaw in a world increasingly ruled by the fascism of political correctness.

In the provincial and increasingly simple-minded world of Hollywood, casual racism is usually the telliest tell of all, its own kind of tired spoiler that predictably informs us that Gil is either a villain or will suffer a comeuppance — because that’s what today’s Production Code of Political Correctness requires. In the end, though, Gil steps up, and within the context of the situation, is revealed to be both heroic and loyal.

What a fascinating and surprising choice for Zahler to make.

In most every interview he sits down for, Zahler is pretty much berated over his politics, his non-conformity, his refusal to adhere to the Production Code of Political Correctness. In other words, he’s called on the carpet and told to explain himself — “Are you now or have you ever been a Republican!” But Zahler — God bless him — refuses to answer. Other then confessing to being an atheist Jew, Zahler will only say his films do not express a point of view, that his only goal is to create something compelling.

I, for one, believe him…

If you want to bleed art into something bland, the fastest route is through ideological conformity. Audiences are pretty smart these days and after two decades of this shit, we’re starting to roll our eyes. As tired of these “tells” as the rest of us, Zahler has chosen instead to be an artist who surprises, who thrills in ways big and small, who zigs where other artists, either out of fear or a lack of imagination, censor themselves.

Threatening our hero with abortion? A character who says racist shit is not a one-dimensional cross burner? A drug dealing protagonist who’s also a devoted family man, Christian, and patriot?

Brawl in Cell Block 99 is so perfectly structured and executed, you’d love it even without Zahler’s iconoclastic approach towards his characters, but it’s that approach that lifts the movie into something surprising, fascinating, and unforgettable.

Dragged Across Concrete? Even more so.

Normally, I don’t read reviews until mine is complete. Only the film should inform my perspective. Unsure I’d have access to Dragged (thankfully it was also released on VOD), I took a peek at what others are saying and came away with one overall impression: while most critics gave it a passing grade, many of these so-called progressives who condemned the film as racist exposed their own latent racism with all their talk about Dragged’s  “two stars.”

What about Tory Kittles?

Anyone who watches Dragged and sees only two stars — Vince Vaughn and Mel Gibson — should ask themselves why they’re overlooking the magnificent work of Tory Kittles, a black actor every bit as charismatic as Gibson and Vaughn, a remarkable presence who very nearly steals a movie that mostly belongs to his character, Slim.

But let’s back up a bit…

Dragged is not, as its reactionary critics suggest, about white men who fear losing their place in a changing world. A few off-color remarks, a couple of politically incorrect punchlines, and confronting the reality — yes, the reality — of what life is like for a white person in a deteriorating neighborhood with a predominantly black population, is not what Dragged is about. I’ll get to all of that in a bit, but let’s start with what Dragged really is about … and that’s duty to family.

Slim comes home from prison eager to go straight until he discovers his mother is back on drugs and hooking while his handicapped younger brother is locked in a bedroom.

Ridgeman (Gibson) is a 60-year-old cop running out of time to fulfill his patriarchal duty. His ex-cop wife (Laurie Holden) has MS and his daughter is constantly being racially-bullied. He needs money to move before something even worse happens to a little girl on the edge of womanhood.

Lurasetti (Vaughn) is desperately in love with a professional woman way out of his league and looking for every edge to hold on to her, including an engagement ring he couldn’t afford even before the suspension.

The suspension is what drives everything.

Lurasetti and Ridgeman are caught on video mildly (at least when compared to Rodney King or what we usually see in movies) roughing up a big-time, Hispanic drug dealer. In a terrific scene, their boss (and Ridgeman’s former partner — played by the great Don Johnson) explains the sorry ways of a sorry world — a world where “the entertainment industry we now call the news media needs a villain,” “where the handling of every perceived intolerance is done with total intolerance.”

At the same time, though, he doesn’t let them off the hook. While Ridgeman undoubtedly would have treated a white dealer the same way and is about to be unfairly crucified as a racist by the Roman circus the news media has become, he still went too far and needs to box the compass of his humanity.

Furious and desperate, Ridgeman decides “We have the skills and the right to acquire proper compensation.”

Lurasetti is not so sure, but he’s loyal to his partner and “thinking about the kind of future I can offer my girlfriend.”

So the long and oddly fascinating stakeout of a drug dealer begins, the idea being to grab a payday that will get them through the suspension and over the speedbump keeping them from a better life.

Meanwhile, Slim’s making similar moves and a collision between these three characters (who have a whole lot more in common than not) twists a knot in your gut that lingers long after the credits roll. 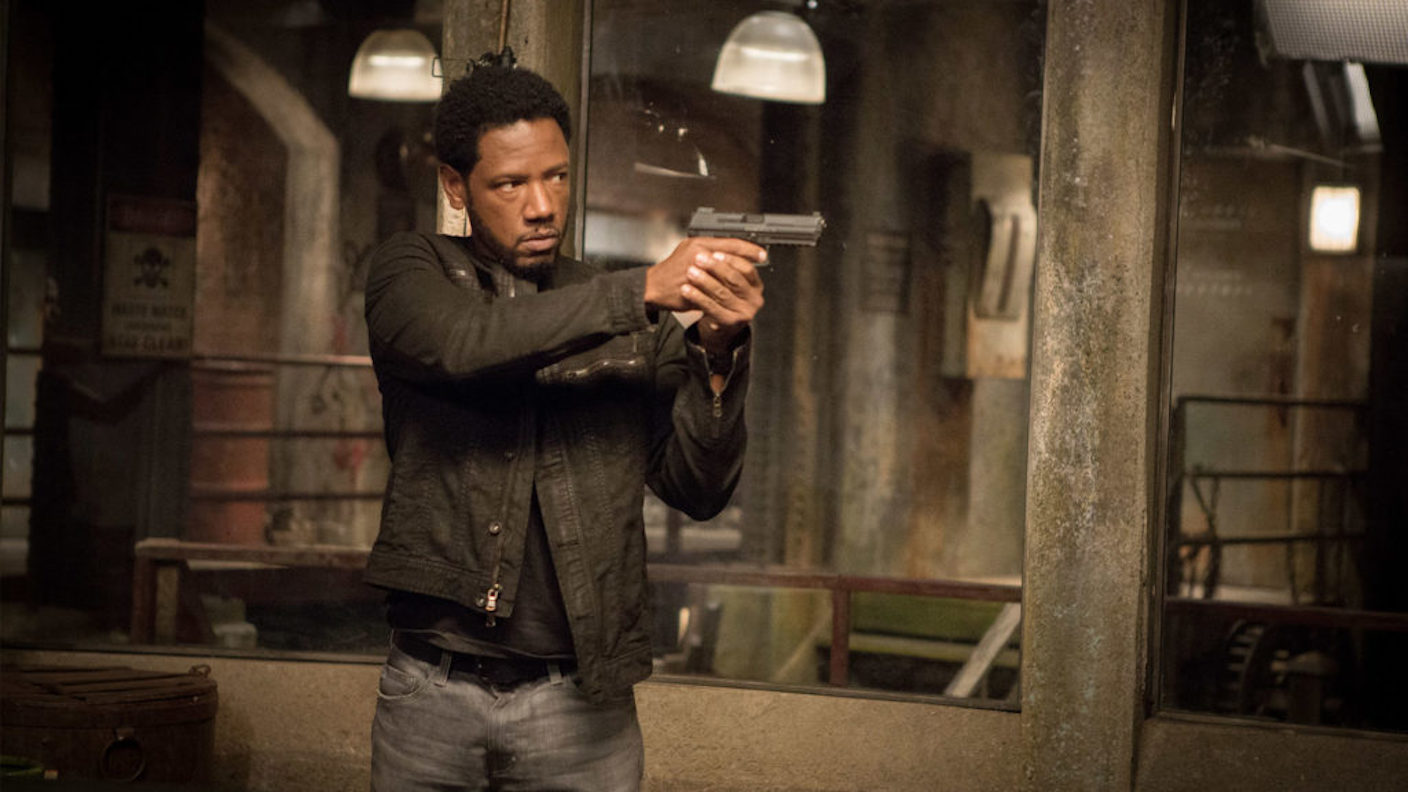 Zahler takes his sweet time with everything, an approach that is the opposite of dull. At two hours and forty minutes and almost no action until the last half-hour, he wants us to get to know his characters, even a bank employee (Jennifer Carpenter) so devoted to her newborn baby she can barely return to work after a three month maternity leave (Imagine that — a movie that depicts a professional woman desperate to be home with her baby, to be a full-time mother).

And in getting to know these characters, we are invited to spend time with realistic people as they are, and to do so without being lectured about the appropriate opinions to hold of them.

Some critics are screaming homophobia because Ridgeman and Lurasetti comment on how you can no longer tell if a singer is a man or woman, because Ridgeman jokes about Lurasetti’s choice of hair product being “gay.” Gimme a break.

Some critics are angry because Laurie Holden’s character admits to feeling guilty, feeling like a racist over what’s happening to her daughter and what she fears will happen to her daughter.

Some truly stupid critics are screaming racism because Dragged’s arch-villain actually is a virulent racist, but these critics are forgetting that he’s the, uh, arch-villain — you know, the guy Zahler wants us to hiss. But this racist psycho (whose face we never see) is something more, a way for Zahler to distinguish between actual racism and the complicated realities of the human condition.

Like the Ridgemans, I’m a white person who was once forced by economic circumstance to live, work, and go to school for more than two years in a mostly black ghetto. I promise you there is no shortage of black people who will warn a white person against such a thing. You see, it simply doesn’t matter that 99.99 percent of your neighbors are good people. All it takes is one bully to single you out for your skin color.

Zahler deserves credit for reflecting this reality, and I dare anyone tut-tutting him over this perfectly valid artistic choice to test this reality.

Zahler’s most brilliant choice, though — a choice that again forces us to see the difference between shit talk and true racism — is the woman Lurasetti wants to marry: a beautiful, accomplished black woman whose skin color is never mentioned, not even by Ridgeman.

It’s also worth mentioning that Zahler isn’t paving new ground here, he’s merely rewinding his art back to a freer time, to the wonderful era of 70’s filmmaking.

The French Connection’s Popeye Doyle (Oscar-winner Gene Hackman) and The Stone Killer’s Lou Torrey (Charles Bronson), The Taking of Pelham One Two Three’s Zachary Garber (Walter Matthau), and Across 110th Street’s Mattelli (Anthony Quinn) — I could go on and on — all make Ridgeman and Lurasetti look woke.

You see, once upon a time, in that glorious era between the original Production Code and today’s increasingly oppressive Production Code of Political Correctness, movies weren’t afraid to get real, to offer us characters in all their complexities, to reflect them through a humanist prism — flaws and all. Unlike today, though, this was not done to give insufferably pious storytellers the opportunity to virtue signal; it was done for the sake of art — to create the most compelling and memorable characters possible.

That kind of artistic integrity has nearly been eradicated by the corporate conformists and fascists who seek to rule American culture, so we must pay attention to Zahler, the rare artist with that integrity and an extraordinary gift for storytelling.

Dragged Across Concrete is utterly hypnotic. I never wanted it to end, and I am going to watch it again today. And then I’m going to put my money where my mouth is and give Zahler’s debut, Bone Tomahawk (2015), another look. This time with the attention it deserves.