Pop star Cher defended herself from attacks on social media Tuesday in a series of now-deleted tweets after she was criticized for questioning Sen. Bernie Sanders’ (I-VT) plan to let felons and terrorists vote.

“TERRORIST KILLED INNOCENT PPL. IM SICK OF BEING NAILED 2 CROSS BECAUSE U PPL THINK IM A RACIST‼️IM NOT GOING TO DEFEND MYSELF‼️I CARE 4 ALL PPL,TRY TO HELP ALL PPL,” Cher said. “Excuse The Fk Out Of Me If I don’t want ,Murders, Rapists, &; CHILD MOLESTERS of every color to vote.”

This post comes in response to a social media user who criticized Cher for panning the idea of letting felons vote. 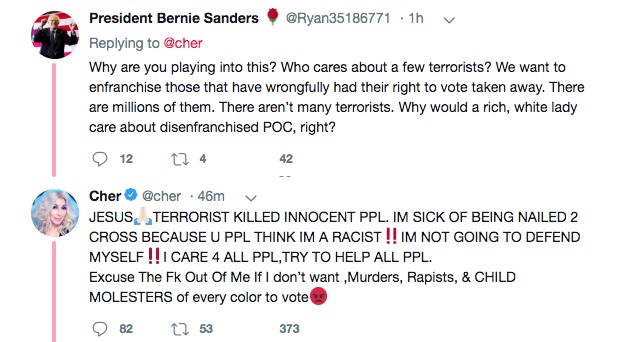 In a Tuesday tweet, Cher questioned Bernie Sanders’ statement that felons should be able to vote. 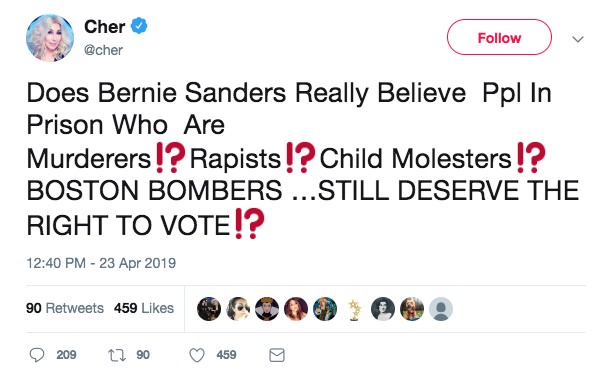 Another user told Cher, “A disproportionate number of black and brown people end up in prison for petty or invented stuff, put there by racist judges and racist cops. Our system isn’t perfect; let’s allow them to vote AND work on disassembling racism in our legal system.”

“DO YOU PPL JUST CHOOSE TWTS YOU CAN TWIST⁉️EXCUSE THE FK OUT OF ME IF I DONT FEEL WHITE BLACK,BROWN,CONVICTED CHILD MOLESTERS, MURDERERS OR RAPISTS STILL IN PRISON SHOULD KEEP RIGHT TO VOTE‼️” she replied. 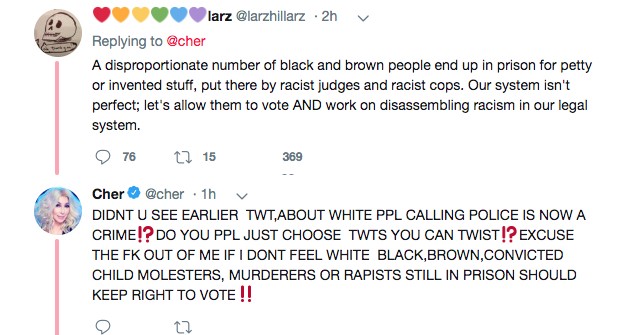 Cher’s original tweet, and her two responses were all later deleted.

During Bernie Sanders’ town hall Monday, he reiterated his belief that felons need to be able to vote, even terrorists.

“[I] think the right to vote is inherent to our democracy…Yes, even for terrible people because once you start chipping away — you say, ‘That guy committed a terrible crime, we’re not going to let him vote,’ or ‘that person did that,’ you’re running down a slippery slope,” he said.