Pop icon Cher questioned the wisdom of Sen. Bernie Sanders’ (I-VT) recent declaration that felons, even terrorists, should have the right to vote. 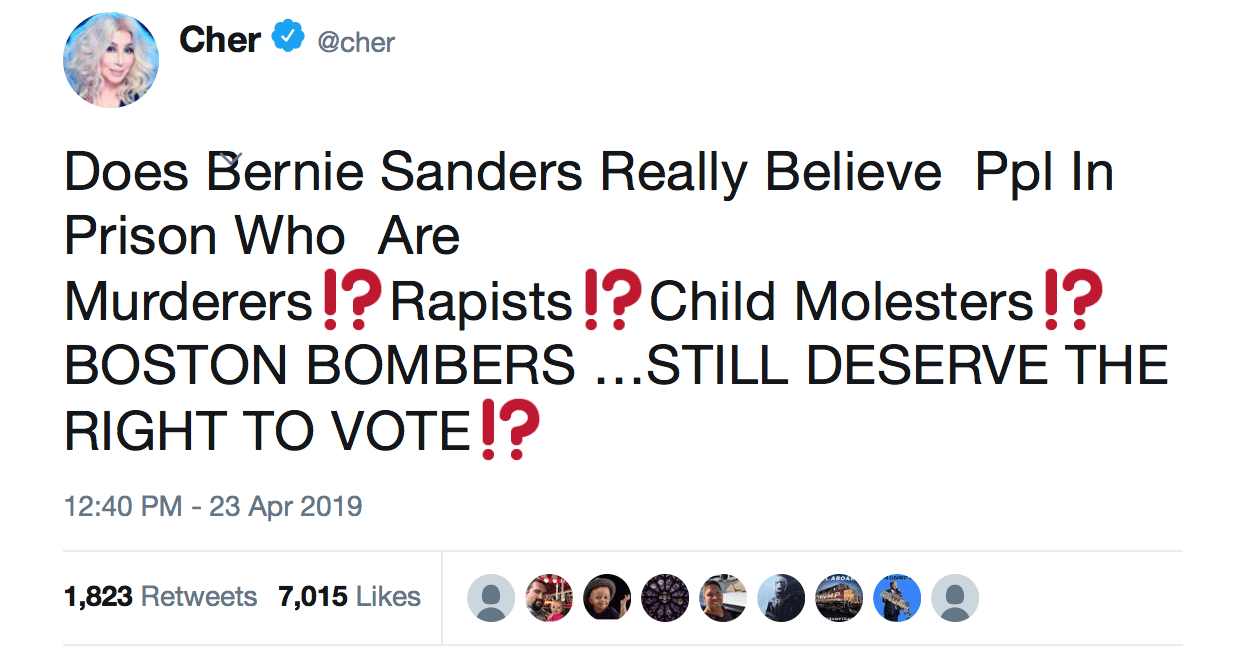 Bernie Sanders voiced his belief that felons should not be deprived of a right to vote earlier this month. During a CNN town hall Monday night, Sanders was again asked about his position by host Don Lemon.

“Yes, even for terrible people because once you start chipping away — you say, ‘That guy committed a terrible crime, we’re not going to let him vote,’ or ‘that person did that,’ you’re running down a slippery slope,” the socialist candidate said. “So, I believe people who commit crimes, they pay the price and they get out of jail, they certainly should have the right to vote…I believe even if they are in jail, they’re paying the price to society, but that should not take away their inherent American right to participate in our democracy.”

Cher’s political opinions are usually that of a typical Hollywood liberal, and she has frequently shared deranged fantasies like President Donald Trump being placed in a “straight jacket.”

However, the 72-year-old recently veered into politically incorrect territory when it comes to the issue of immigration and questioned why some wanted Los Angeles to take in even more immigrants when it already has a large homeless population.

“I Understand Helping struggling Immigrants, but MY CITY (Los Angeles) ISNT TAKING CARE OF ITS OWN.WHAT ABOUT THE 50,000+ [American’ Citizens WHO LIVE ON THE STREETS,” the “Gypsies, Tramps & Thieves” said. “PPL WHO LIVE BELOW POVERTY LINE,& HUNGRY? If My State Can’t Take Care of Its Own(Many Are VETS)How Can it Take Care Of More.”

I Understand Helping struggling Immigrants,but MY CITY (Los Angeles) ISNT TAKING CARE OF ITS OWN.WHAT ABOUT THE 50,000+🇺🇸Citizens WHO LIVE ON THE STREETS.PPL WHO LIVE BELOW POVERTY LINE,& HUNGRY? If My State Can’t Take Care of Its Own(Many Are VETS)How Can it Take Care Of More