Hollywood actress Sharon Stone on Monday urged her social media followers to donate to the longshot congressional campaign of former CIA officer Valerie Plame’s (D), who has had to apologize for sharing an antisemitic article on social media.

“I feel certain that we can come up w some cash for VALERIE $$$$$,” tweeted Stone with a link to Plame’s first campaign ad touting her run for Congress in New Mexico.

I feel certain that we can come up w some cash for VALERIE $$$$$ #ValeriePlame
“Valerie Plame is running for Congress.” https://t.co/kB0y10bzXP

Thousands of small campaign contributions have helped propelled Plame to the financial lead in a crowded primary competition for an open seat in 2020, despite Plame being mired in a controversy that saw her defend and then apologize for sharing an antisemitic article on social media.

In September 2017, Plame tweeted a link to an article on the Unz Review titled “America’s Jews Are Driving America’s Wars.” Plame responded to a flood of criticism by telling her critics to “calm down” and she argued that “re-tweets don’t imply endorsement.” But Plames tweet wasn’t a re-tweet at all. Before long, Plame had apologized for sharing an article she admittedly didn’t fully read, on a site the peddles 9/11 conspiracies. 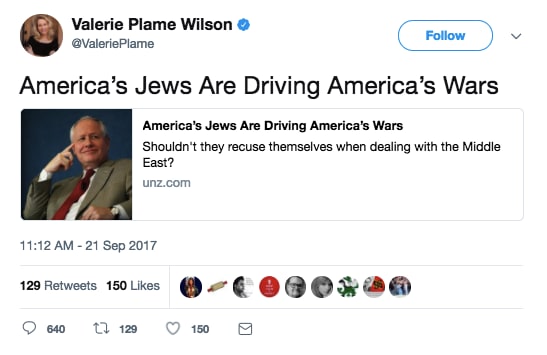 Nevertheless, Plame raised $236,000 in May and June, with nearly 3,700 donations from people who gave less than $200, according to disclosure forms and a statement from the campaign. Federal regulators do not require candidates to disclose the source of contributions under $200, although sources of small contributions are expected to be publicly reported later this month by ActBlue, the maker of automated campaign fundraising software used by many Democrats.

Among the notable donors, as Breitbart News reported, were Breaking Bad star Bryan Cranston and actress Naomi Watts, who portrayed Plame in the 2010 film about her involvement in political jousting at the start of the Iraq War under President George W. Bush. As the Washington Free Beacon reported, Plame’s campaign has received support from  Hollywood power producers Jonathan Nolan and Doug Liman.

New Mexico’s 3rd Congressional District spans heavily Hispanic and Native American northern New Mexico and has been a stepping stone for prominent Democrats including Sen. Tom Udall and ex-Gov. Bill Richardson, who went on to become a Cabinet secretary and United Nations ambassador.