Acclaimed director and screenwriter Paul Schrader has equated supporters of President Donald Trump to Nazis, saying that they are the same as “the crowds that lined the streets in Nuremberg in 1933.”

“There are those who say Trump’s supporters don’t understand what is really going on. I’m afraid I disagree. I think they know exactly what’s happening and approve of it. They want a strong man rule. They don’t want the chaos of democracy,” Schrader wrote.

“They revere democracy in principle but hate it in practice. They are nativists. They are the crowds that lined the streets in Nuremberg in 1933. The question is: are there more of them or more of us?” 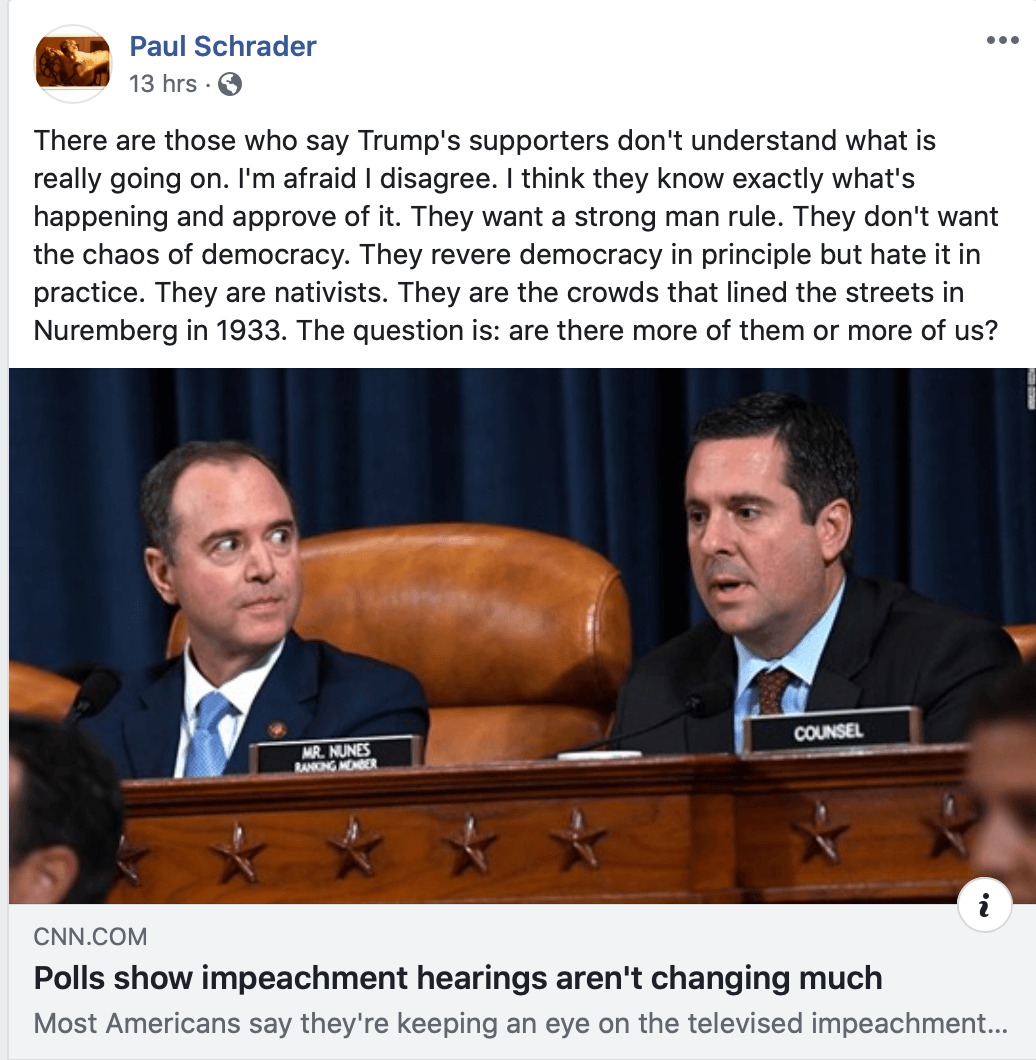 Schrader was reacting to a CNN report on polls showing that many respondents have already made up their minds on impeaching President Trump, regardless of what actually happens during the hearings.

The remarks represent Schrader’s most strongly worded statements against President Trump and those who voted for him since the filmmaker called for violence in a rambling post shortly after the 2016 presidential election.

“I have spent the last five days meditating on Trump’s election,” Schrader wrote at the time on Facebook. “Upon consideration, I believe this is a call to violence. I felt the call to violence in the 60’s and I feel it now again. This attack on liberty and tolerance will not be solved by appeasement.”

“We should finance those who support violence resistance. We should be willing to take arms. Like Old John Brown, I am willing to battle with my children. Alt right nut jobs swagger violence. It’s time to actualize that violence.”

The Raging Bull scribe later revealed that those comments landed him in trouble with the Department of Homeland Security.

“I did get visited by Homeland Security this year because I posted something on Facebook about Donald Trump and the John Brown moment we are now in. So they came and visited me to ascertain whether I am a threat to the president’s life. I am not — except in theory,” he told Variety.

He told Rolling Stone that he was able to convince Homeland Security that he didn’t pose a threat to the president.

“It wasn’t very hard. I just explained the five stages of grief. And that anger was one of them.”

Schrader, who received his first Academy Award nomination this year for First Reformed, is the latest entertainment industry figure to compare President Trump and his supporters to the Third Reich.

Filmmaker Judd Apatow,  actress-singer Cher, and actresses Ashley Judd and Patricia Arquette have all compared President Trump to the Nazis or Adolf Hitler.

He’s a Nazi. He wants no judicial process. He kidnapped children and commits acts of violence for political gain and to support his racist views.He admires violent dictators. Trump is a Nazi. The debate is over. Soon we will have proof he is a Nazi supported by the Russians. https://t.co/o4cS2iWzvS

In a classic early Hitler move Trump will have a military parade & try to embolden his crazed followers.