Actor-comedian George Lopez walked back comments he made Sunday offering to accept a bounty to assassinate President Donald Trump.

While delivering the eulogy at Sunday’s funeral for Iranian terror chief Qasem Soleimani, a speaker suggested an $80 million bounty on Trump, a bounty Lopez said he’d take on for $40 million.

“[Iranian] authorities have put a bounty on American President Donald Trump’s head during the televised funeral of General [Qasem Soleimani] after he was assassinated last week,” said Chicano Worldstar on Instagram. “What are your thoughts?” 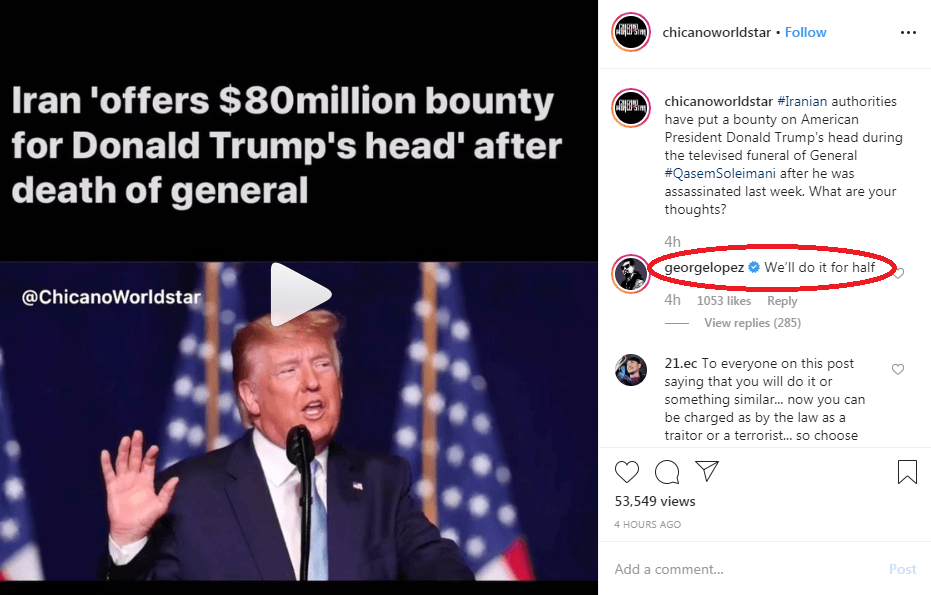 After searing backlash online — “arrest George Lopez” was trending on Twitter on Monday — Lopez is walking back his comment, saying  it was “a joke” according to a Fox News report.

Meanwhile, the Secret Service says it is aware of the death threat Lopez made against President Trump.

“The Secret Service is aware of the [post] made by Mr. Lopez. The Secret Service takes all threats against the President and or any of our protectees seriously, and as a matter of practice, we do not comment on matters involving protective intelligence,” a spokesperson said in a statement.

To be clear, Lopez’s obsession with violence directed at Trump and his supporters dates back years.

In November of 2018, Lopez was charged with misdemeanor battery over an altercation with a man Lopez himself described as baiting him with “MAGA jokes.”

The next day police officers tracked Lopez down at a golf course (so much for being a man of the people). He was told he’s be receiving a court summons for misdemeanor battery.”

The alleged victim said it was all just a joke, a way to get the comedian  to smile.

“On the count of 3 say Make America Great Again!” was all the man says he said. As Lopez walks past the man, the video shows the altercation, which begins as Lopez tries to grab the man’s phone.

During the 2016 election, Lopez tweeted out a photo of drug kingpin Joaquín “El Chapo” Guzmán holding up Trump’s severed head like a trophy with the caption: “Make America Great Again.”