Saturday Night Live returned to TV over the weekend, after a month long hiatus, in its first “quarantine version” of the long running NBC sketch comedy show. The pre-taped SNL “from home” was hosted by coronavirus survivor Tom Hanks with musical guest Coldplay frontman Chris Martin.

“Why me as host?” Hanks asked at the top of his four-minute opening monologue. “Well, for one, I have been the celebrity canary in the coal mine for the coronavirus, and ever since being diagnosed, I have been more like America’s dad than ever before since no one wants to be around me very long and I make people uncomfortable.”

Zoom meetings was the medium of choice as the show’s “cold open” featured a montage of the SNL cast members arrayed in an onscreen gallery.

One skit featured a mock Zoom work meeting, where McKinnon and Aidy Bryant played a pair of inappropriate receptionists. Bryant was stopped just in time when she brought her laptop with her into the bathroom. “I used my license as toilet paper and now I don’t know my own birthday,” Bryant said.

“Every day I eat half a chicken,” McKinnon joked. “Sorry, chickpea.”

With Bernie Sanders dropping out of the Democratic primary race since the last time SNL was on, actor Larry David reprised his role as the Vermont senator.

“Don’t worry about me,” David said. “It’s spring in Vermont, so soon it will be up to 40 degrees. And I finally have the time to relax and finish that heart attack from October.”

“What the hell happened,” David said answering questions about how his campaign ended. “First of all, math happened. And it didn’t help that the media lined up behind Joe Biden like he lines up behind the set of a lady’s shoulders.”

Colin Jost and Michael Che imported an electronic audience for laughs during “Weekend Update,” since Che said telling jokes with no reaction reminded him of a hostage video.

Alec Baldwin, portraying Trump, called in to the “Weekend Update” segment, although without video since Baldwin didn’t have access to makeup. The faux president noted that “every night at 7 p.m. all of New York claps and cheers for the great job I’m doing,” a reference to the nightly tribute to medical workers. 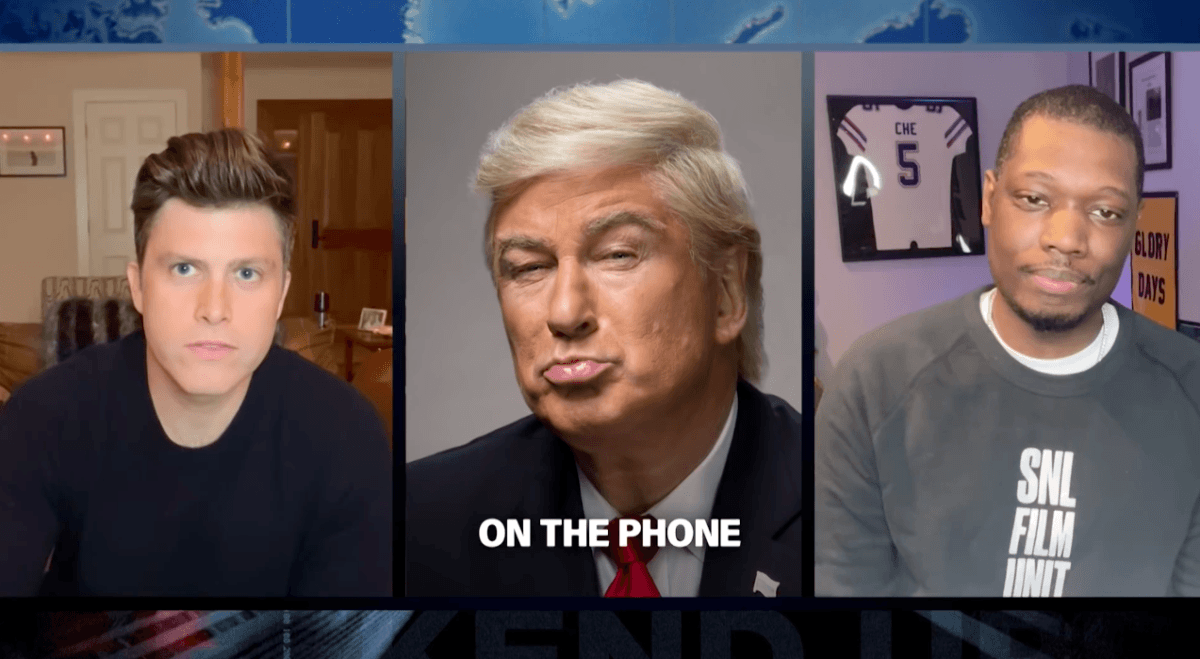 The set included Baldwin rattling off rejected nicknames for the coronavirus — “Hong Kong Fluey. Crouching Tiger, Hidden Symptoms, Wang Chung Lung. And then there’s General Tso’s Revenge — and ended with a reference to the hit Netflix documentary Tiger King. “But in times like this, we need to come together as one nation, because no matter our differences all Americans can agree on one thing. Carole Baskin definitely fed her husband to those tigers.”

“I have a feeling Pence is going to be pretty into Joe Exotic,” Baldwin said, insinuating the VP Pence is sexually attacked to Exotic, who is gay.