Fashion and music mogul Kanye West unleashed a wild rant on Twitter late Monday, accusing his wife Kim Kardashian West of attempting to “lock” him “up with a doctor” after he spoke about abortion and his children during his presidential campaign event in Charleston, South Carolina.

On Monday evening, West called out his reality TV star wife and her mother, Kris Jenner, claiming the two “tried to lock” him up. West said he put his “life on the line” to ensure his daughter, North West, would never pose for Playboy magazine.

West also said Jenner was “not allowed” around his and Kardashian’s three children. 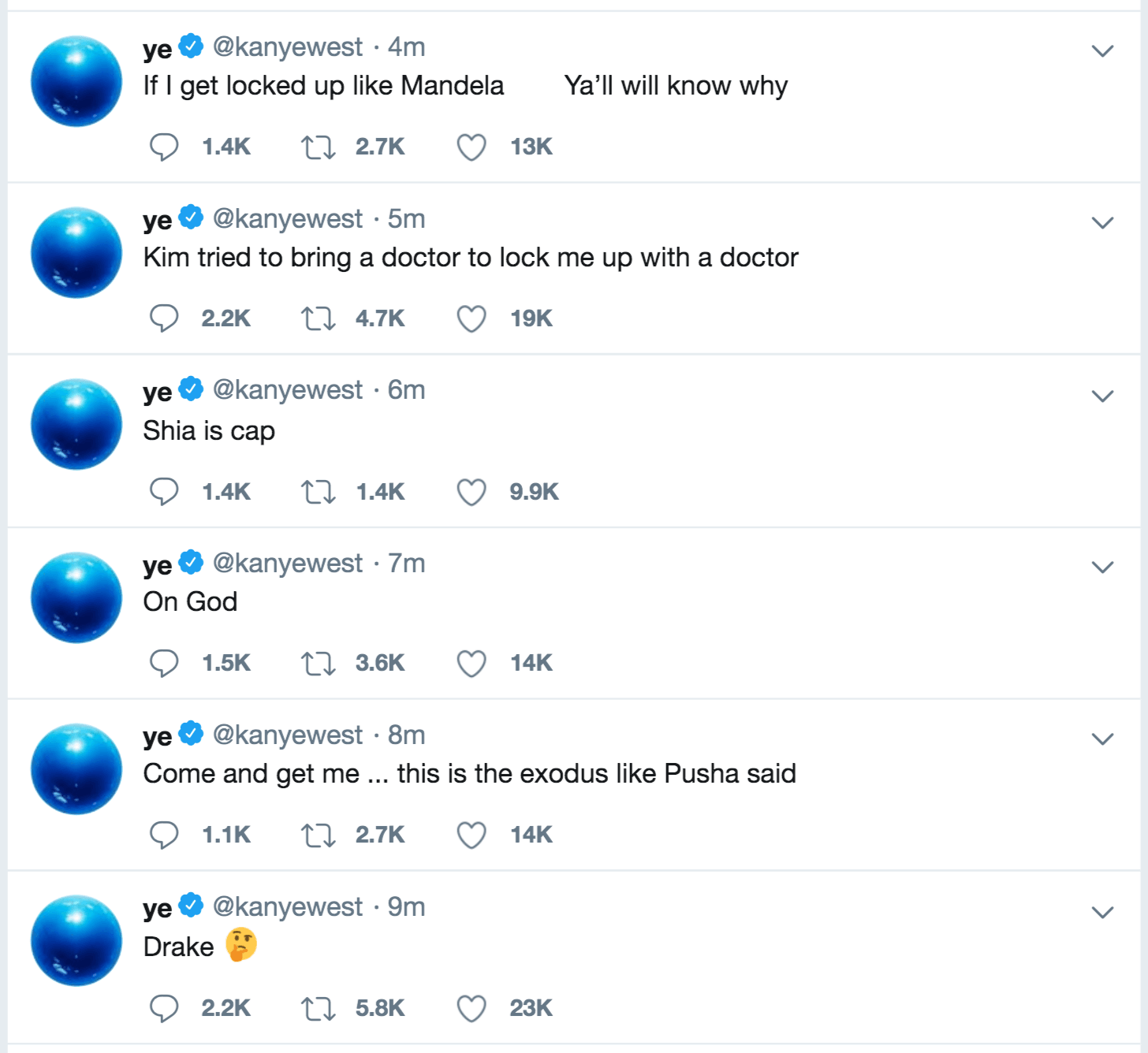 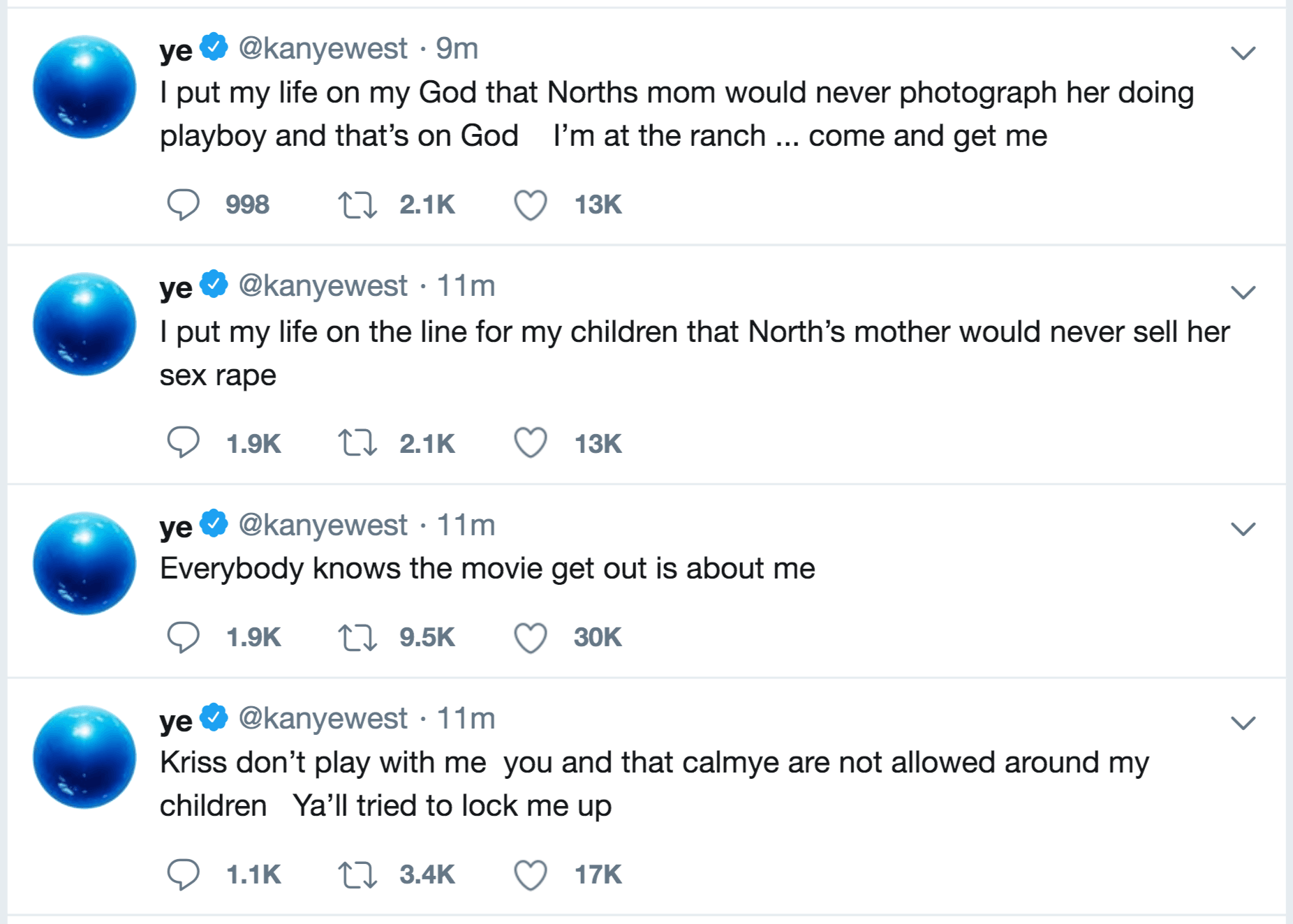 West posted a photo of himself and his children, writing that they will “never do playboy.”

In another post, West wrote “Righteous indignation” with a screenshot of the Google search results for the phrase which includes a photo of Breitbart News founder Andrew Breitbart’s New York Times best-seller Righteous Indignation: Excuse Me While I Save the World! 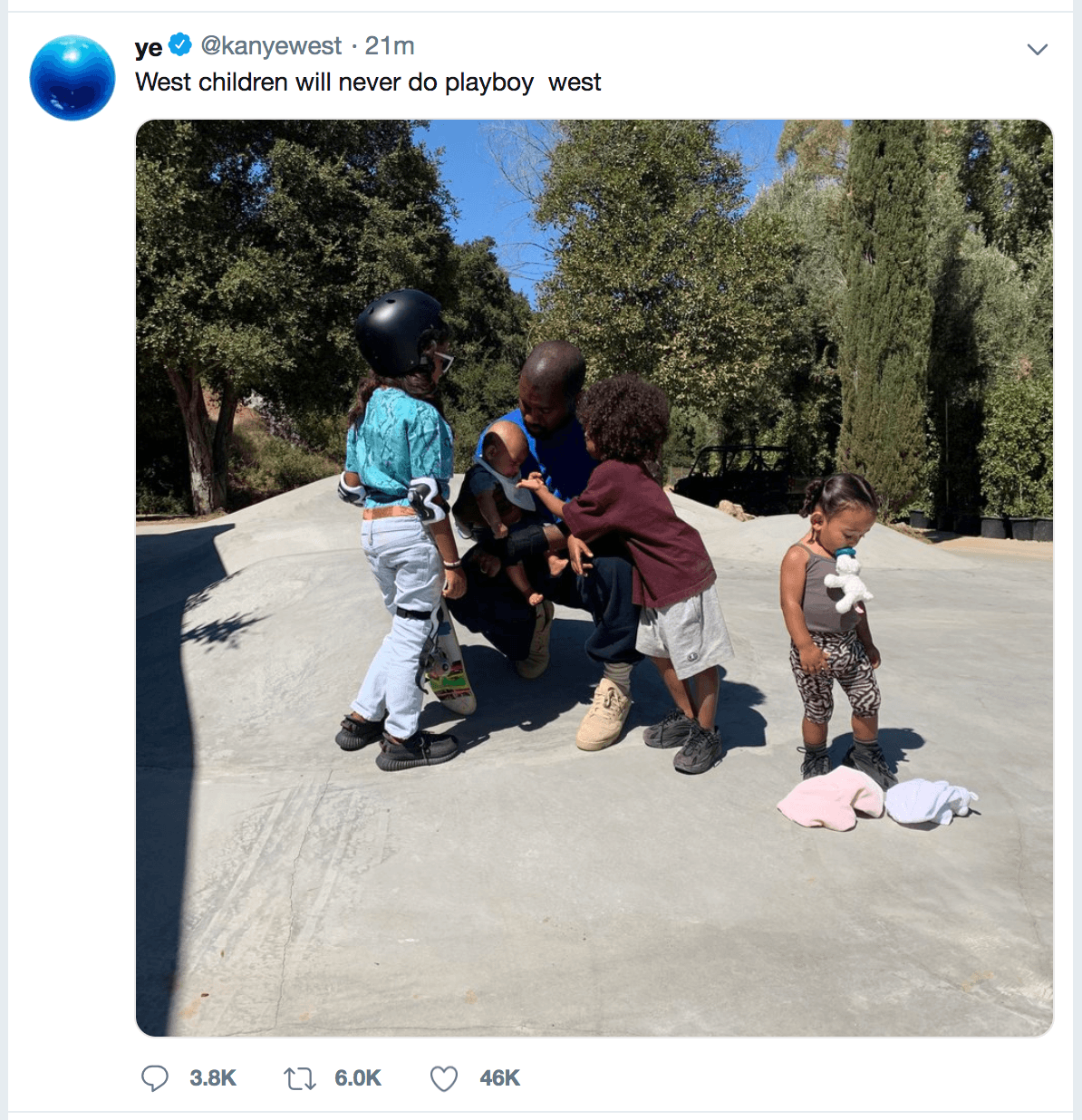 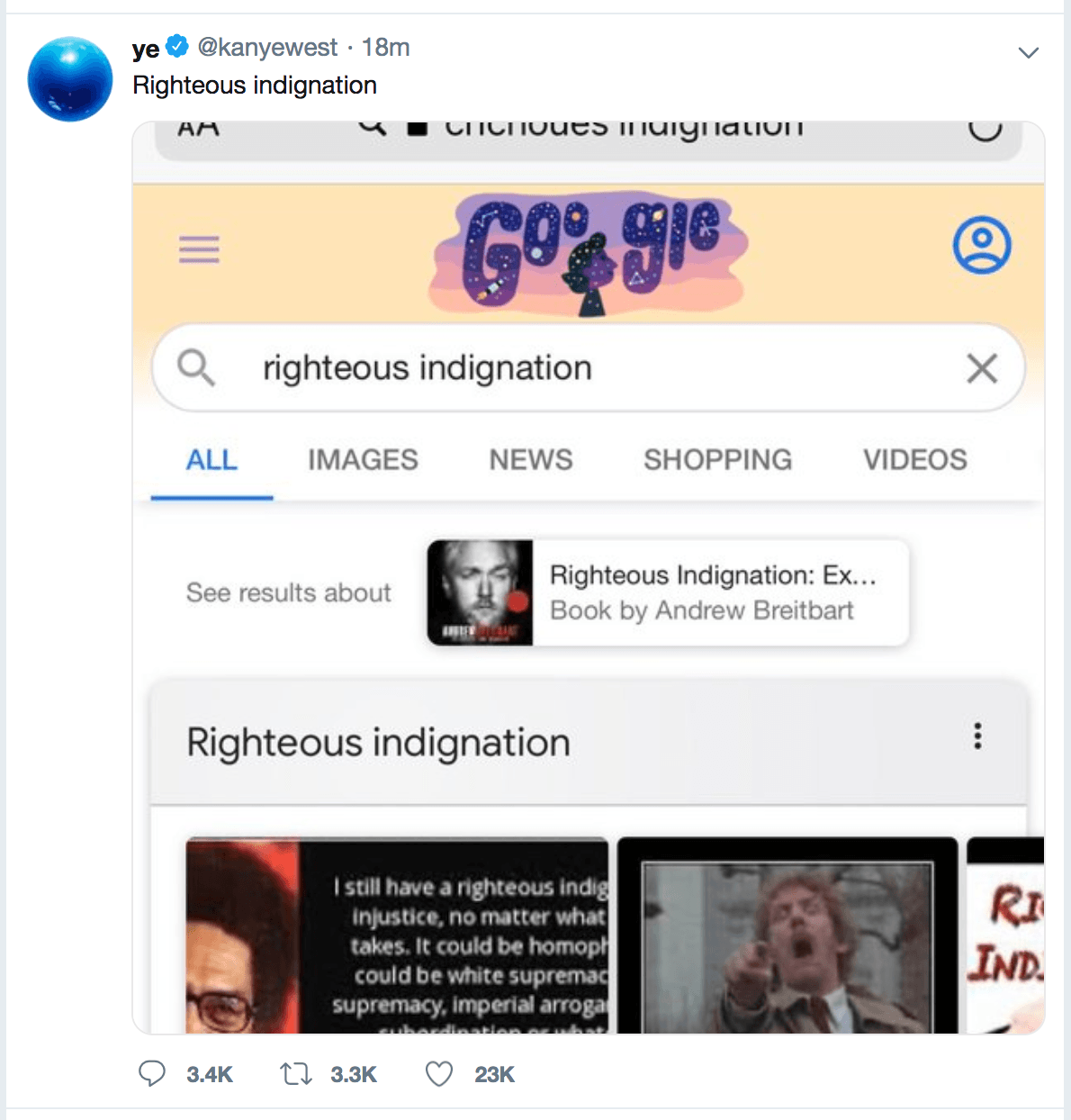 Later, West accused Kardashian of “trying to fly to Wyoming with a doctor to lock me up like on the movie Get Out because I cried about saving my daughter’s life yesterday,” referring to a portion of his campaign event where he told the story of his decision not to have his daughter North aborted.

“For 1 month, and 2 months, and 3 months, we talked about her not having the child,” West said at the event. “[Kim Kardashian] had the [abortion] pills in her hand.”

The Grammy-winner proclaimed that he wants his three children to live with him on his ranch in Cody, Wyoming, writing “it’s not up to [the E! Network] or NBC anymore.” 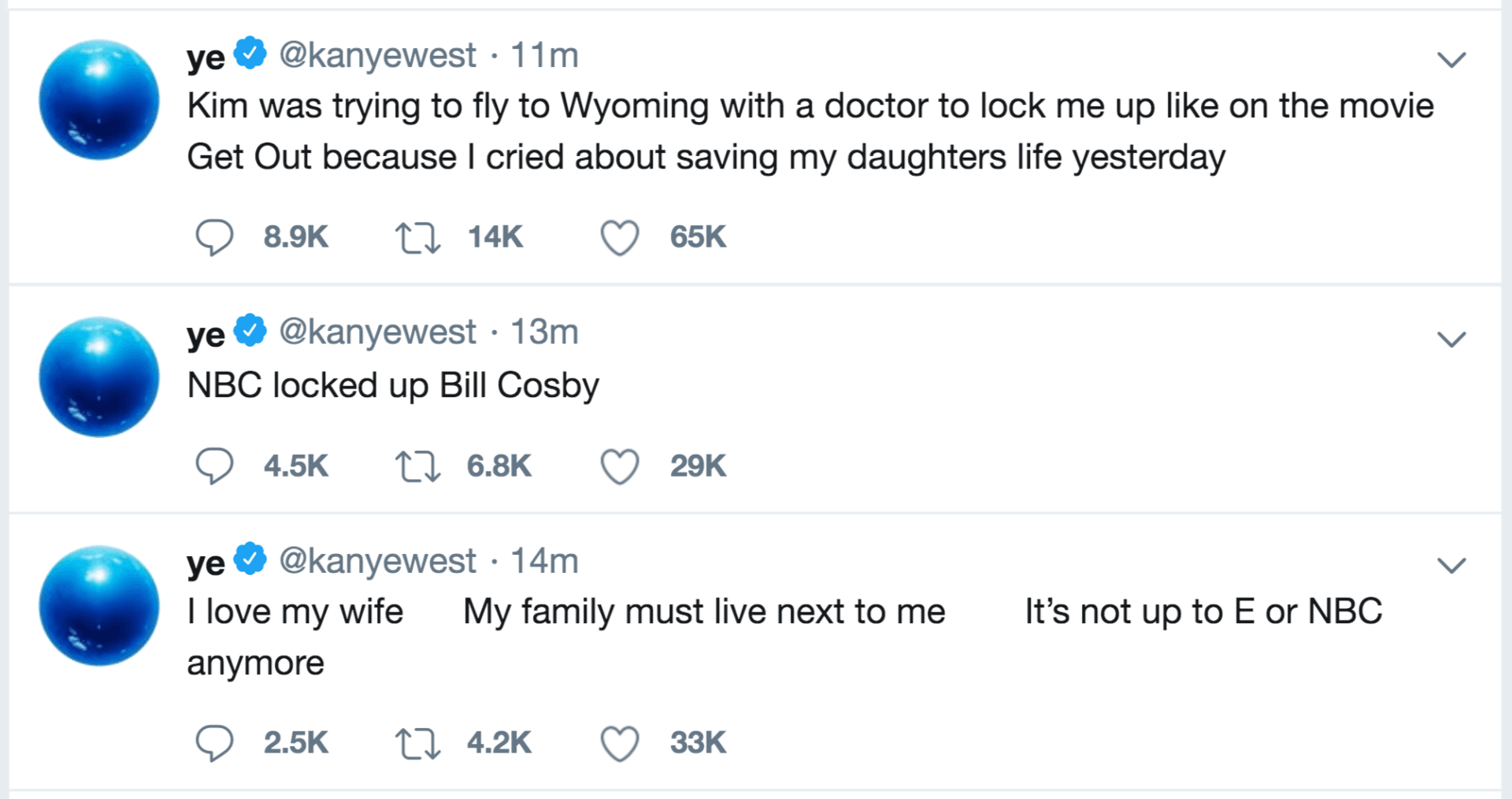 The night before the rant, the Jesus Is King rapper continued his crusade against abortion, gun control, and pornography.