Rap superstar Kanye West has hinted at postponing his bid for the U.S. presidency after questioning whether all black people should be voting for Democratic nominee Joe Biden.

“#2020VISION or maybe ’24,” West wrote in one of the deleted tweets, that was part of a series of tweets posted Tuesday night. “I guess all black people supposed to vote on [Joe] Biden? Y’all want me to run on [sic] nah???” 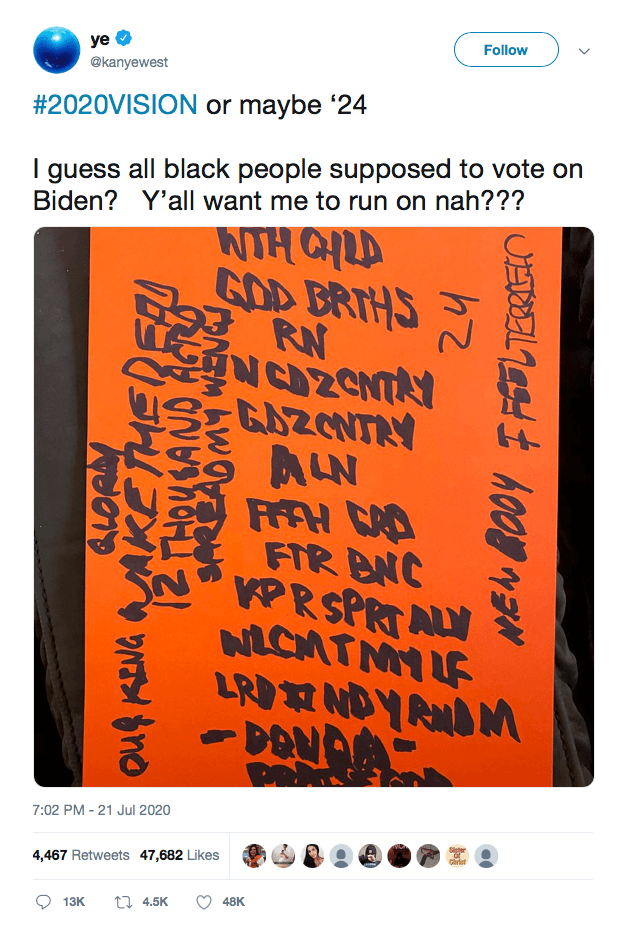 The suggestion that all black people are “supposed” to vote for Biden is presumably a reference to comments made by the former vice president in an interview back in May where Biden said that black people who don’t vote for him “ain’t black.” Biden later apologized for trying to be a “wise guy.”

The 43-year-old Grammy-winner’s comments about postponing his campaign have poured further doubt over the seriousness of his intention to run, having already missed the deadline to run in several states. Nevertheless, The Jesus Is King crooner launched his presidential campaign on Sunday in South Carolina where he railed against progressive policies such as abortion and gun control.

“Do you realize I’m putting my life on the line for the truth?” West told his supporters. “I understand it’s exciting. It’s a new world, to have someone who’s not afraid of anyone and only afraid of God and in honor of God.”

Meanwhile, the fashion mogul submitted petitions to have his name appear on Illinois presidential ballot on Monday, mere minutes before the state’s registration deadline.