Win Both Seats, which counts Stacey Abrams among its leaders, is raising money specifically for “black and brown” community organizers who will apparently work to secure victory for both candidates. Comedian-actor Kumail Nanjiani and One Tree Hill star Sophia Bush are among the group’s co-founders, along with Democratic presidential candidate Andrew Yang and former Russell Simmons adviser Michael Skolnik. Black Lives Matters co-founders Patrisse Cullors and Alicia Garza are also leaders of the group. 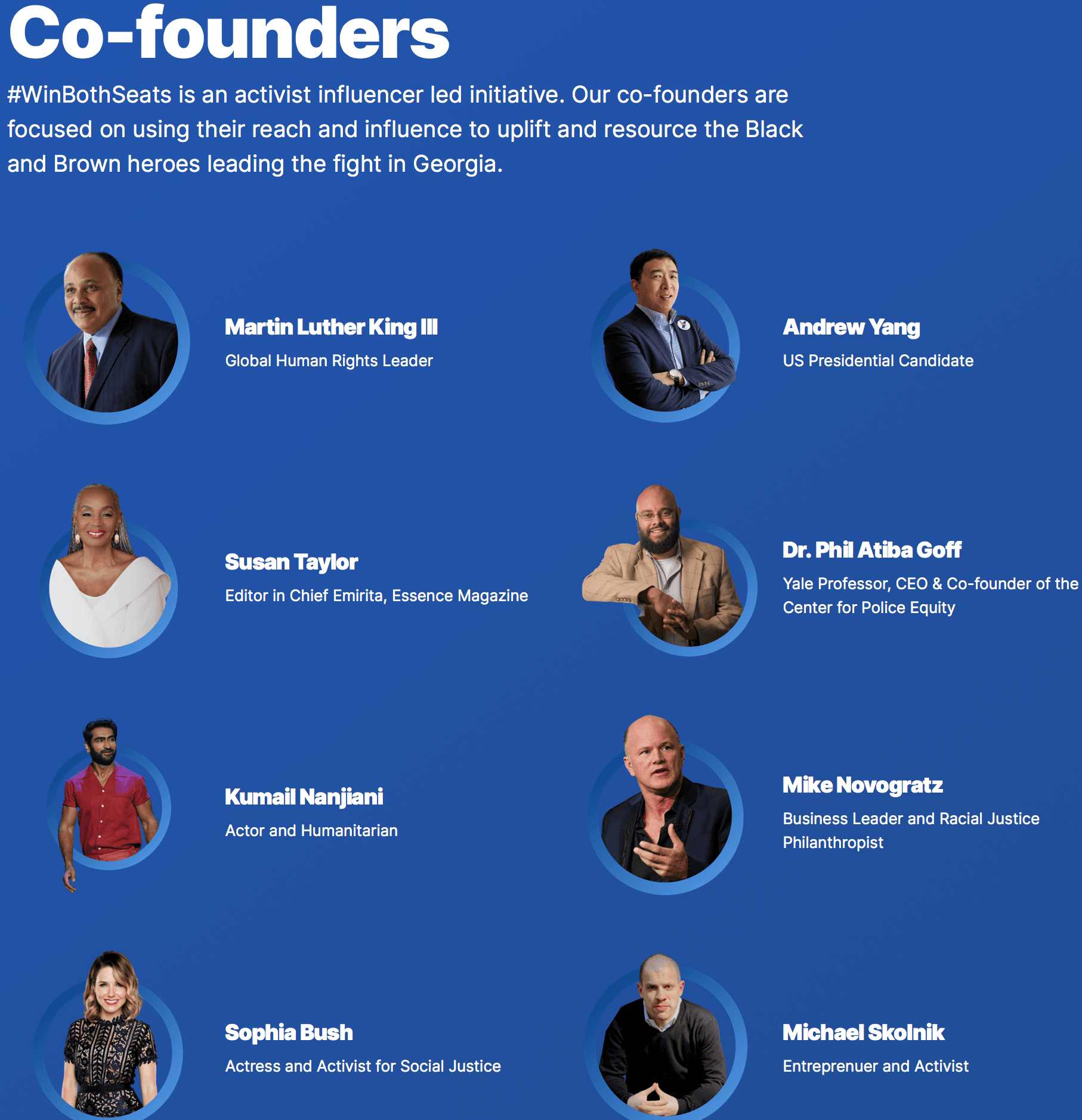 Other Hollywood stars who are promoting the group include Joseph Gordon-Levitt, Ben Stiller, Debra Messing, and Billy Eichner.

“We’ve vetted and selected a group of the most effective Black and Brown led community organizers – with a proven track record in Georgia,” the organization says on its official site. “With our support they’ll be able to drive the turnout needed to #WinBothSeats.”

Georgian’s runoff elections, set for January 5, are among the most watched in the nation. The candidates are hoping to unseat incumbent Republican Sens. David Perdue and Kelly Loeffler, thereby tipping the Senate for Democrats.

Raphael Warnock is facing barrage of bad news for his past anti-Israel statements and policies, and for hosting Cuban dictator Fidel Castro. The candidate was arrested in 2002 for obstructing a police investigation into alleged child abuse at a church camp in Maryland.

The Eternals and Silicon Valley star Kumail Nanjiani encouraged his fans to donate to Win Both Seats, saying the groups “distributes money to a group of the most effective Black & Brown led community organizers with a proven track record in Georgia.”

I am involved with this organization that distributes money to a group of the most effective Black & Brown led community organizers with a proven track record in Georgia.

If you are able to, please donate:https://t.co/XBTCCEpxfm

Want to help win #Georgia and make sure Mitch McConnell can’t keep blocking American progress!? SAME! We vetted 16 community organizers who can activate voters where they matter most! Give today and let’s win the Senate! There’s a LOT on the line! 👏 https://t.co/ucBqvKW38A

Inception, The Dark Knight Rises, and Snowden star Joseph Gordon-Levitt also encouraged his fans to donate to Win Both Seats.

https://t.co/MU9h94CY3j I just donated to help win the up-for-grabs Senate seats, & demote #MoscowMitch & co. to the minority. Please join me!

Michael Skolnik, who previously worked as political director for Russell Simmons prior to the hip-hop mogul’s #MeToo scandal, said that the group raised  $667,381 in 24 hours.

In 24 hours, we’ve raised $667,381 for Black + Brown led organizations working in Georgia to #WinBothSeats! Keep giving whatever you can. 100% of all money raised will go directly to the orgs. https://t.co/5ZtT58FeTC

Actor-comedian Billy Eichner tweeted his support for Win Both Seats.

Actress Anna Wood also said she is donating to Win Both Seats.