Former NBA star Kareem Abdul-Jabbar is attacking conservative and anti-woke celebrities, demanding that social media giants step up censorship because these stars are tweeting “irrational and harmful opinions to millions.”

In an essay for The Hollywood Reporter, Kareem Abdul-Jabbar singled out conservative Hollywood stars Jon Voight and James Woods. He also targeted liberal celebrities who refuse to submit to woke ideology, including Harry Potter author J.K. Rowling, who has advocated for recognizing the difference between biological and transgender women.

“Social media companies have begun slapping warnings on some messages that are false, incite violence or cause harm to society. But this needs to be done with more consistency and vigilance,” Abdul-Jabbar wrote.

“Many Americans imbue stars with political and social intelligence they just don’t have… It doesn’t help to be surrounded by fawning people whose job it is to agree with everything you say. The irresponsibility of tweeting irrational and harmful opinions to millions, regardless of the damaging consequences to their country or people’s lives, proves that those stars deserve the harsh backlash.” 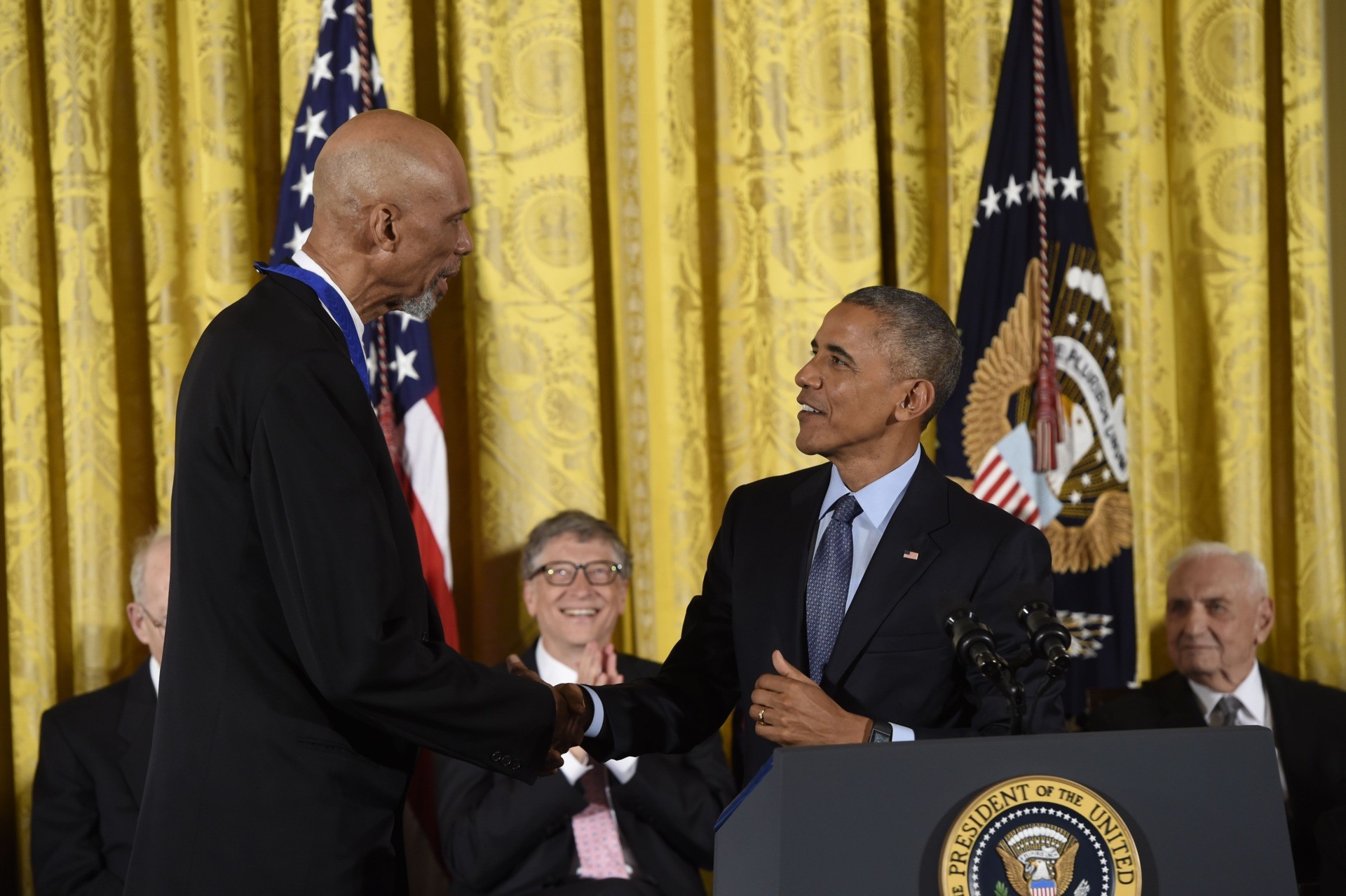 US President Barack Obama shakes hands with NBA star Kareem Abdul-Jabbar shortly before presenting him with the Presidential Medal of Freedom, the nation’s highest civilian honor, during a ceremony honoring 21 recipients, in the East Room of the White House in Washington, DC, November 22, 2016. (SAUL LOEB/AFP via Getty Images)

Abdul-Jabbar made no mention of left-wing celebrities who have tweeted false and defamatory claims. Some have even called for violence on conservatives.

Filmmaker Rob Reiner has repeatedly tweeted the President Donald Trump is a murderer and a white supremacist and that all of his supporters are racists. Actress Debra Messing once tweeted that President Trump is a rapist and pedophile. She recently expressed her hope that the president gets raped in prison. None of these posts has received a fact check or disciplinary action from Twitter.

Instead, Abdul-Jabbar insulted Jon Voight, alleging that one of the actor’s recent social media videos was filled with unfounded claims about the election, reducing him “from brilliant Oscar winner to cultural dumpster diver.” He also dismissed James Woods as a “cranky geezer.”

The basketball great saved some of his harshest criticism for J.K. Rowling, whose comments about transgenderism have been interpreted by the left as proof of her bigotry. “Her anti-trans tweets may not only damage the Potter and Fantastic Beasts franchises, they could end up tainting her entire literary legacy,” he wrote.

Rowling has publicly stated that she isn’t prejudiced against transgender individuals, but said there ought to be a distinction between women and transgender women. “I know and love trans people, but erasing the concept of sex removes the ability of many to meaningfully discuss their lives,” Rowling said. “It isn’t hate to speak the truth.”

Social media platforms increased their fact-checking efforts in the weeks leading up to the election. But much of their energy was focused on censoring President Donald Trump by blocking some of his tweets and suppressing damaging stories to Joe Biden, such as the New York Post‘s series of reports on the Biden family scandal.

Abdul-Jabbar said that he is aware that he is a sports celebrity lecturing other celebrities. But he insisted he is different.

“I have been writing books and articles about history, culture and politics for 30 years to establish my credibility.”