It is 9 days before Sen. Kamala Harris (D-CA) becomes the first female Vice President in United States history. Her cover for American Vogue’s February issue could have reflected the historic nature of this year’s presidential transition of power. But instead, it is the same tired postmodernism long foisted on the culture.

We have gone more than four years without a figure with ties to a sitting or incoming White House on the cover of Vogue. The last time was December 2016 — the fashion establishment’s last hurrah for First Lady Michelle Obama.

It has been reported that First Lady Melania Trump turned Vogue down twice when editors failed to promise her the cover. Mrs. Trump already graced the cover in February 2005, wearing her couture John Galliano for Dior wedding dress. Who needs another? And after all the horrific press coverage of Mrs. Trump’s charities over the last four years, who could blame her?

Harris comes to her executive role with a very friendly relationship with the fashion establishment thanks to their shared value in advancing a progressive agenda and a disliking for the Trumps. It is no wonder she landed the cover of Vogue before anyone else in Bidenworld. The Left is eager to meme her into their cringey “slay kween” category with former Second Lady Jill Biden as an afterthought.

Nonetheless, her presence on the cover is telling.

For the magazine’s print edition, Harris stands in a casual position, hands clasped, atop a pink taffeta curtain in front of a sage jacquard backdrop as a vague color reference to Alpha Kappa Alpha, her sorority. The image, shot by 26-year-old Tyler Mitchell, appears like a test shot with Harris awkwardly smiling as if she is unsure how this all works. 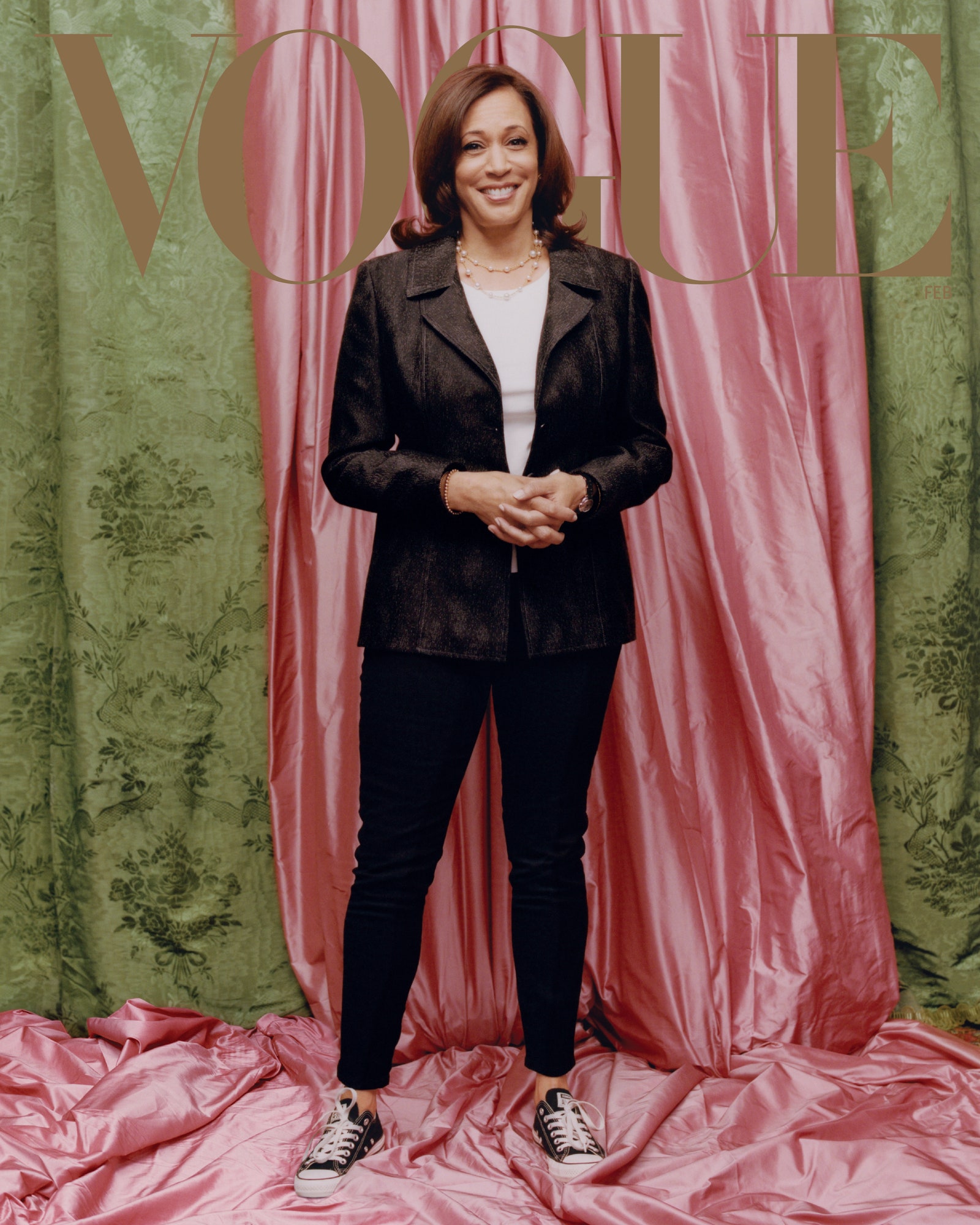 Worse is Harris’s wardrobe. Harris wears a black jacket by Donald Deal, a pair of generic brand skinny jeans, and Converse’s Chuck Taylor All-Star sneakers. You are reading that correctly — sneakers on the cover of Vogue. It was not that long ago, 1988, that Vogue Editor in Chief Anna Wintour put jeans on the cover, a gasp at the time.

Vogue is considered the fashion bible even if many fashion admirers like myself have not considered it so for some time. That criticism is mostly due to its increasingly bland approach to style, where average-looking actresses and entertainers look like the average people they probably are in their personal lives. That is lovely for a photo on the fireplace mantle but this is high fashion.

But not even when Karl Lagerfeld put sneakers on the Paris runway in 2014 did Vogue feature the Chanel kicks on the cover. And yet, Harris’s sneakers are not so much a first as they are a return to an unstylish norm where beauty is redefined by fashion’s critics and postmodernists.

The context of Harris’ cover is vital to understand its significance.

Almost every day, for four years, Mrs. Trump has worn stilettos by either Manolo Blahnik or Christian Louboutin with little exceptions. Even when leaving the White House to visit victims of natural disaster, Mrs. Trump figured it appropriate to elevate the Office of the First Lady with a wardrobe crafted by a fashion great, Hervé Pierre, with an unwillingness to compromise that elegance for the sake of relateable-ness. In other words, like the Vogue of yesteryear, this is fashion.

Those years have come and gone without much fixation from the fashion establishment. I used to think it was because they found Mrs. Trump unable to cover with their seething disgust for her husband fogging their vision. Now I realize they were just waiting for the day when they could get back to their vision of convincing the public that fashion is whatever you want it to be. On the contrary, fashion is what tastemakers envision for a more glamourous globe.

Look no further for their nihilistic tone than Calvin Klein’s daily posts on their Instagram where people are photographed lounging on couches and beds in cheap bras and underwear. It is hard to even believe this is the same brand that once made Brooke Shield’s a star.

And don’t get me wrong, Chuck Taylor All-Star sneakers are great. They have added a streetwear edge to otherwise basic ensembles and they have staked their claim in American sportswear. But they look better sitting in my coat closet than they do on the cover of what is supposed to be the fashion bible. If there was any sense of fashion escapism left at Vogue, it is gone with this cover. Everyday life, everyday clothes but what about extraordinary lifestyles and extraordinary clothes?

The digital cover of Harris, reportedly the one mutually agreed upon before Vogue editors changed their minds, is much more approachable in color, style, stance, and mood. Harris is seen wearing a powder blue Michael Kors Collection suit with her arms crossed and an American flag pin. 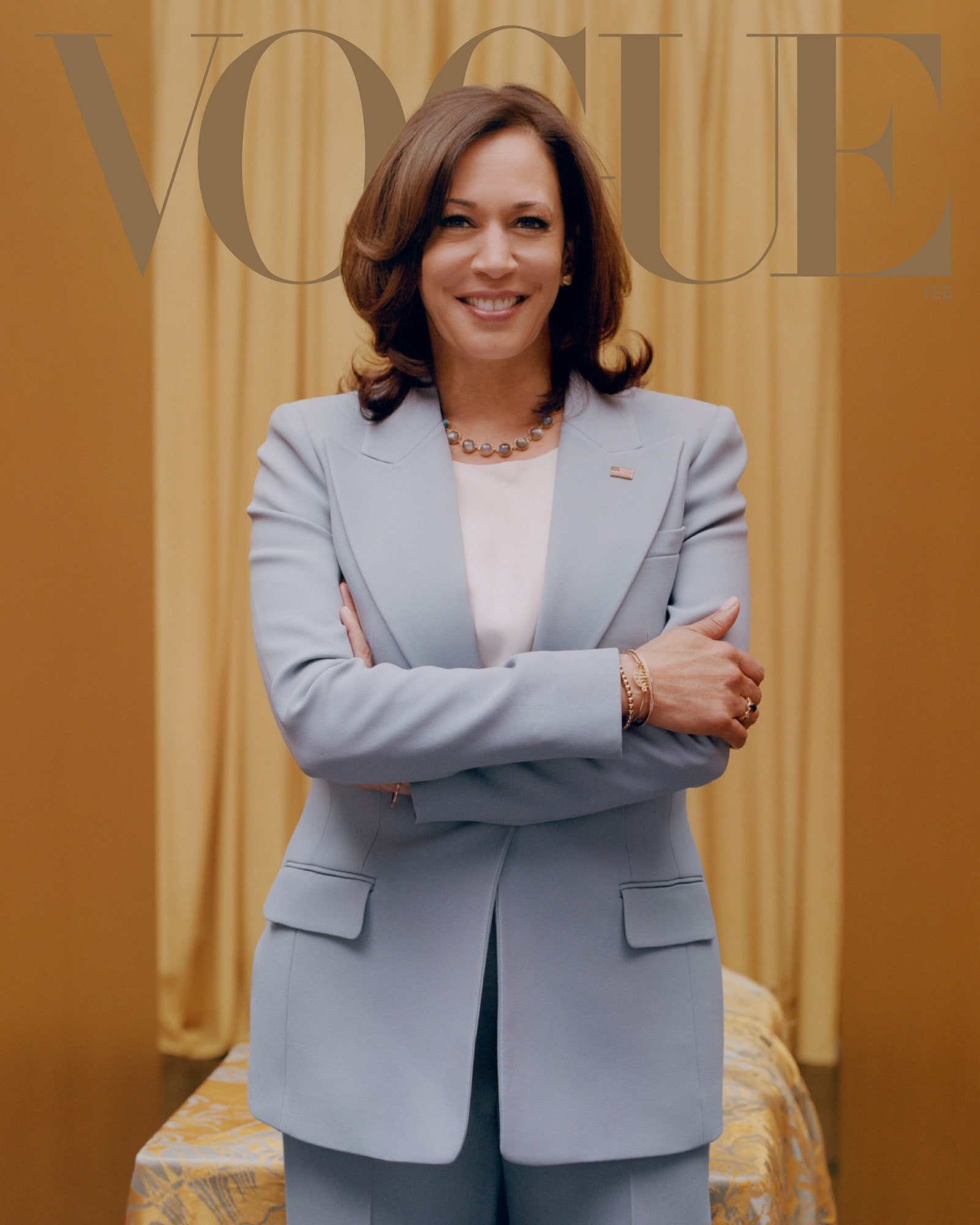 The pale blue is beautiful against the buttercream backdrop, though it does leave you asking what exactly it is that is behind Harris. A table? A window covered by a curtain? A giant chair? Why such a disorienting backdrop for such a statuesque pose?

Despite being remarkably better than the issue’s print edition, I cannot help but think this digital cover missed quite the opportunity for fashion. The Kors suit has an impeccable cut and the wide lapel demands attention but it seems lackluster overall, almost more fitting for a White House official portrait than a fashion magazine. The office attire of the 1980s has made a full comeback and this is the suit Harris is put in? Not a Schiaparelli blazer with surrealist-style buttons?

As disappointing as the covers may be, they are unsurprising. The fashion establishment has drifted further and further from style for decades. I guess the ultimate testament to that is the fact that Harris was ever considered for a Vogue cover to begin with.