The arrivals at the 63rd Grammy Awards were a bit of a bust, mostly because the coronavirus crisis virtue signalers have crushed the best part of these events — the red carpet.

Only a handful of celebrities showed up to the Grammys this year and even fewer took to the dwindled red carpet. For instance, I couldn’t get a full look at what exactly Beyoncé was wearing but from the glimpse of it, she was in custom Schiaparelli.

It’s a shame because I probably would have put her on my best dressed list, but nonetheless, here are the best and worst dressed celebrities from the evening that you most likely (and rightfully so) changed the channel on.

Popstar Dua Lipa positioned herself as one of Donatella Versace’s muses this past year, so it was only natural that she would glam up and glitz out in a custom creation from the Italian fashion house known for its hyper-body conscious frocks.

Not only is the gown so incredibly breathtaking with its encrusted butterfly bustier and glittering mesh draping, but Dua seems to wear Versace like no other celebrity at the moment. Her hips jutting from the cut-outs on each side and stark collar bones tucked under the top’s pink metal straps are pitch perfect. Body is everything with a Versace number.

It’s all very Cher circa 1978. My only complaint is a little extra Cher would have taken this even further. Perhaps adding five more inches to her pin-straight black hair? Only a Disco diva can pull it off, so why not? 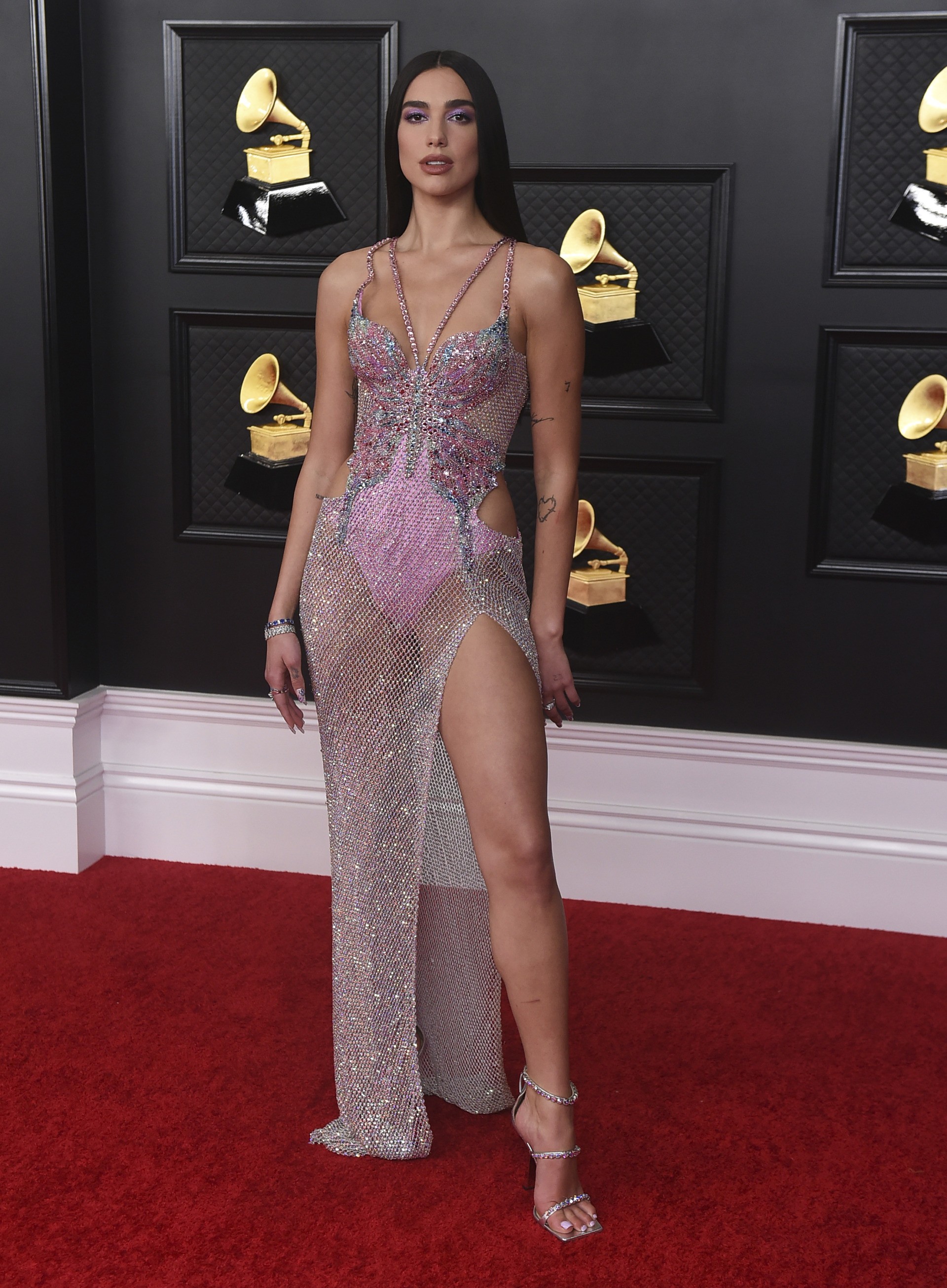 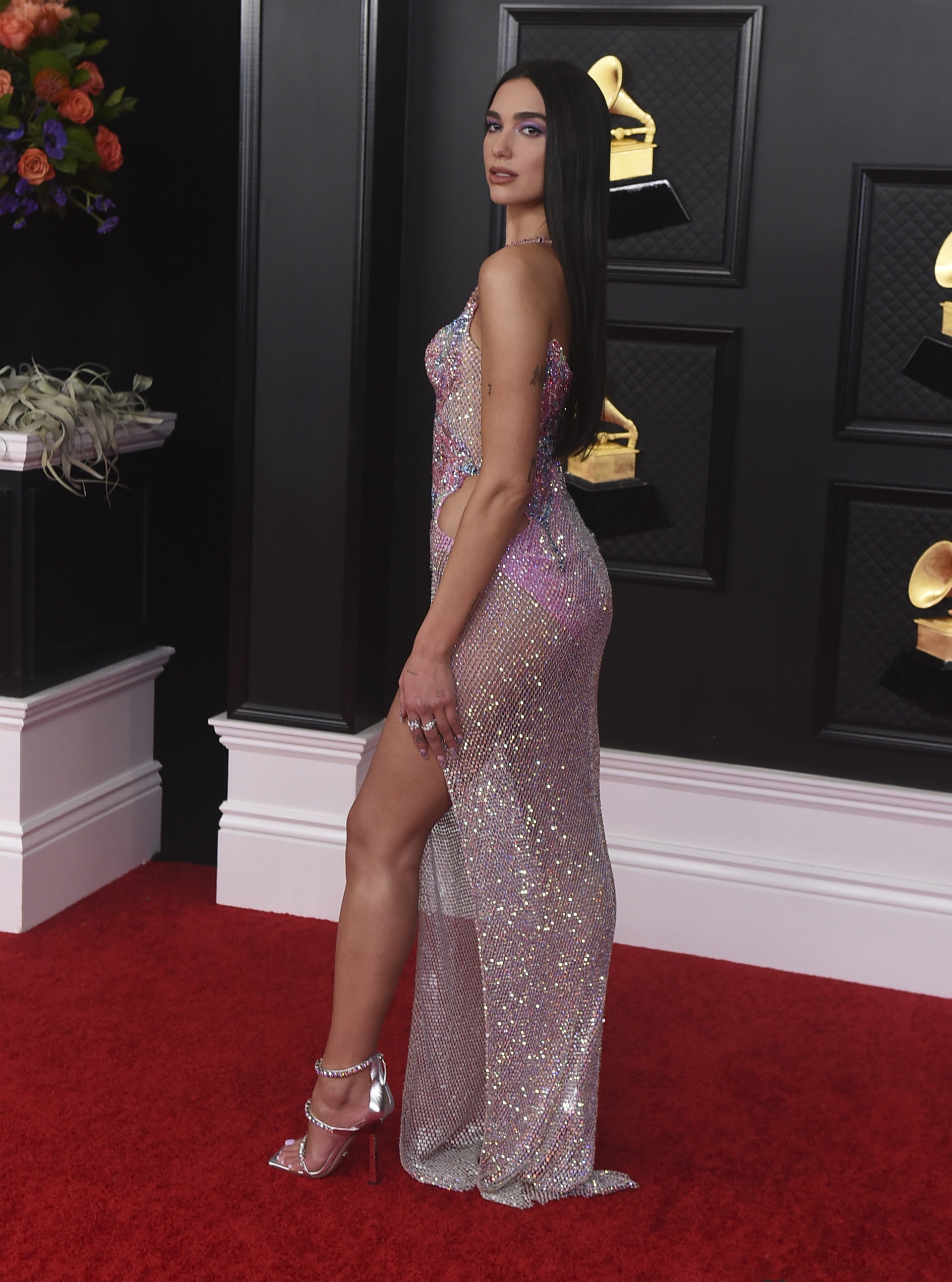 Singer Doja Cat is sort of the weird kid in school, I get it. I was genuinely interested to see what she would show up in considering so few celebrities are willing to take risks.

Unfortunately, this was a risk that didn’t pay off. Roberto Cavalli generally makes beautiful garments in tropical tones and animal prints that are ideal for a vacay. This gown, though, has all the worst elements of Jennifer Lopez’s famed Versace gown from 2000 that so many others, including Jennifer, have since tried to recreate.

I’d prefer the plunging necklines that hit just below the belly button and green feathers plucked from dead birds to be something left in the aughts. For some reason, everyone’s always trying to bring it all back. Please, no more! 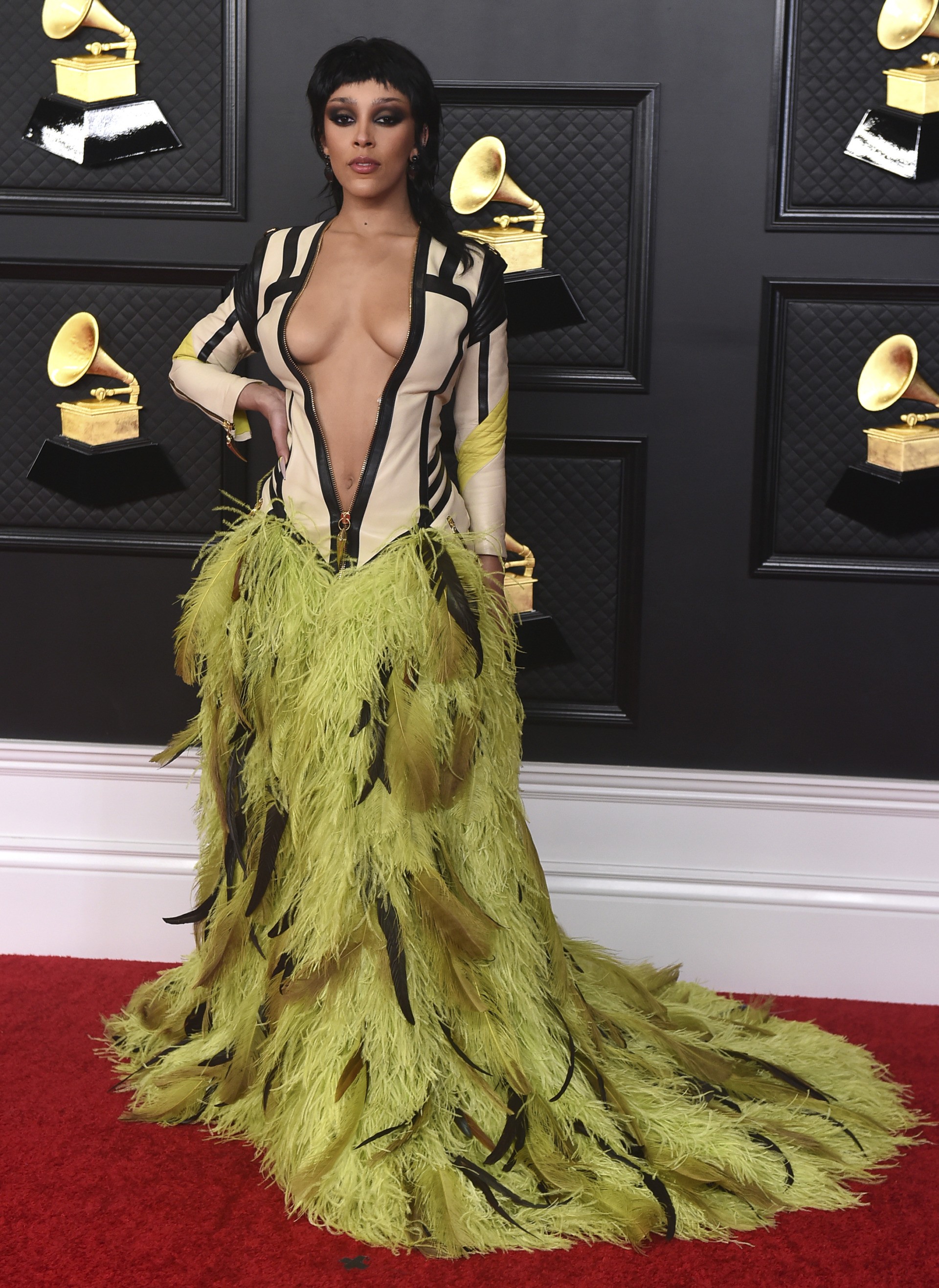 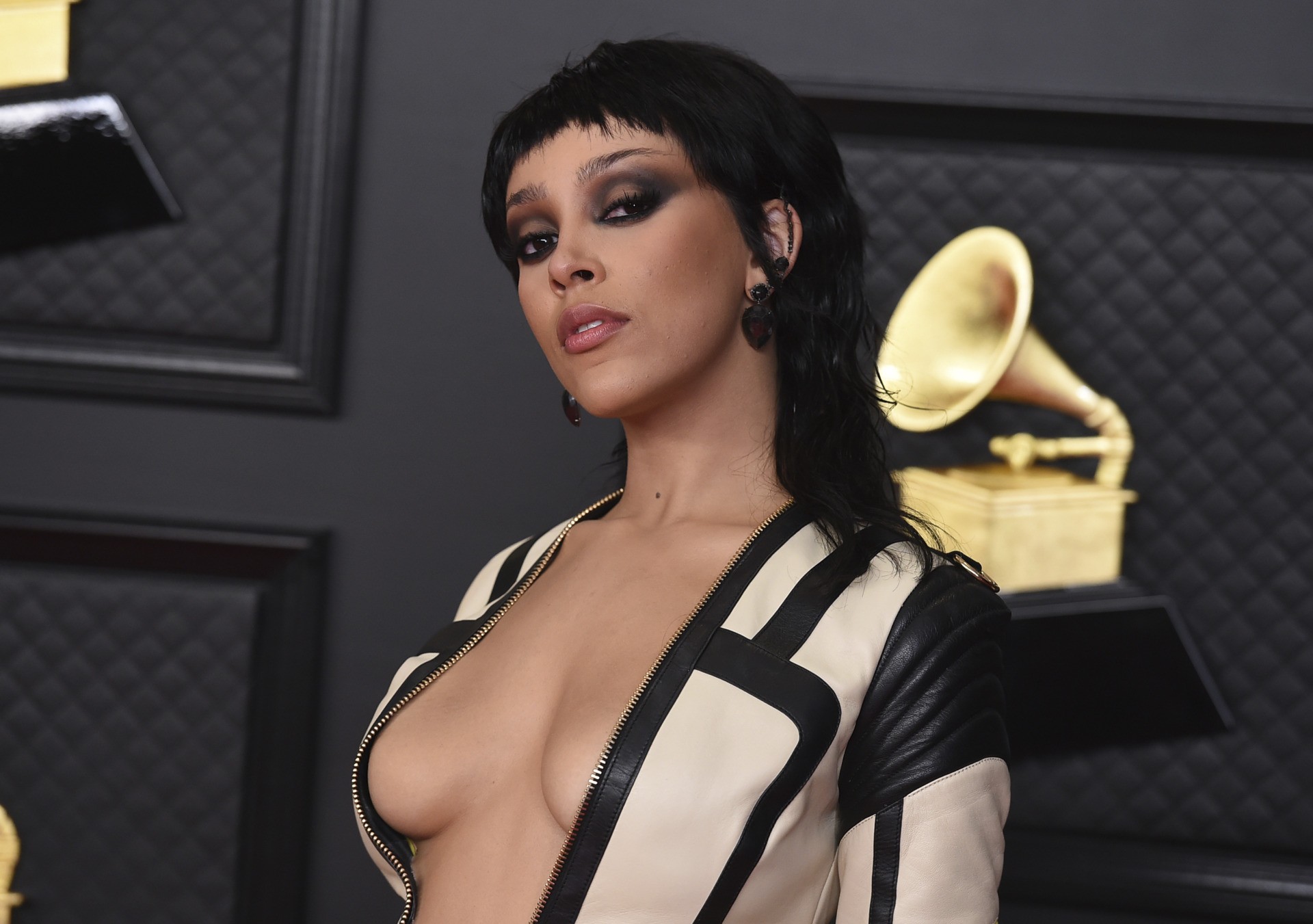 Singer Harry Styles caused a ton of controversy this past year when he was photographed for the cover of Vogue wearing a lace-trimmed gown by Gucci that could have been worn by Queen Victoria. Of course, gender-bending in popdom is nothing new.

KISS, Elton John, David Bowie, the New York Dolls, Guns and Roses, Prince, and Marilyn Manson have all played with color, volume, makeup, costumes, and girlish codes for most of their careers. Harry following suit isn’t as nearly jaw-dropping as the cultural critics have assumed it to be, nor is it worth clutching pearls over.

While I despised his Vogue cover (the clothes were wearing him, and not the other way around), Harry’s Gucci ensemble at the Grammys is all that I want and expect from him.

The yellow plaid jacket stripped from a vintage couch on Napoleon Dynamite and the 1970s undertones of his velvet brown bell-bottoms, v-neck crocheted sweater, purple feather boa, and cream leather boots makes for the kind of look that only an artist could, and should, wear. 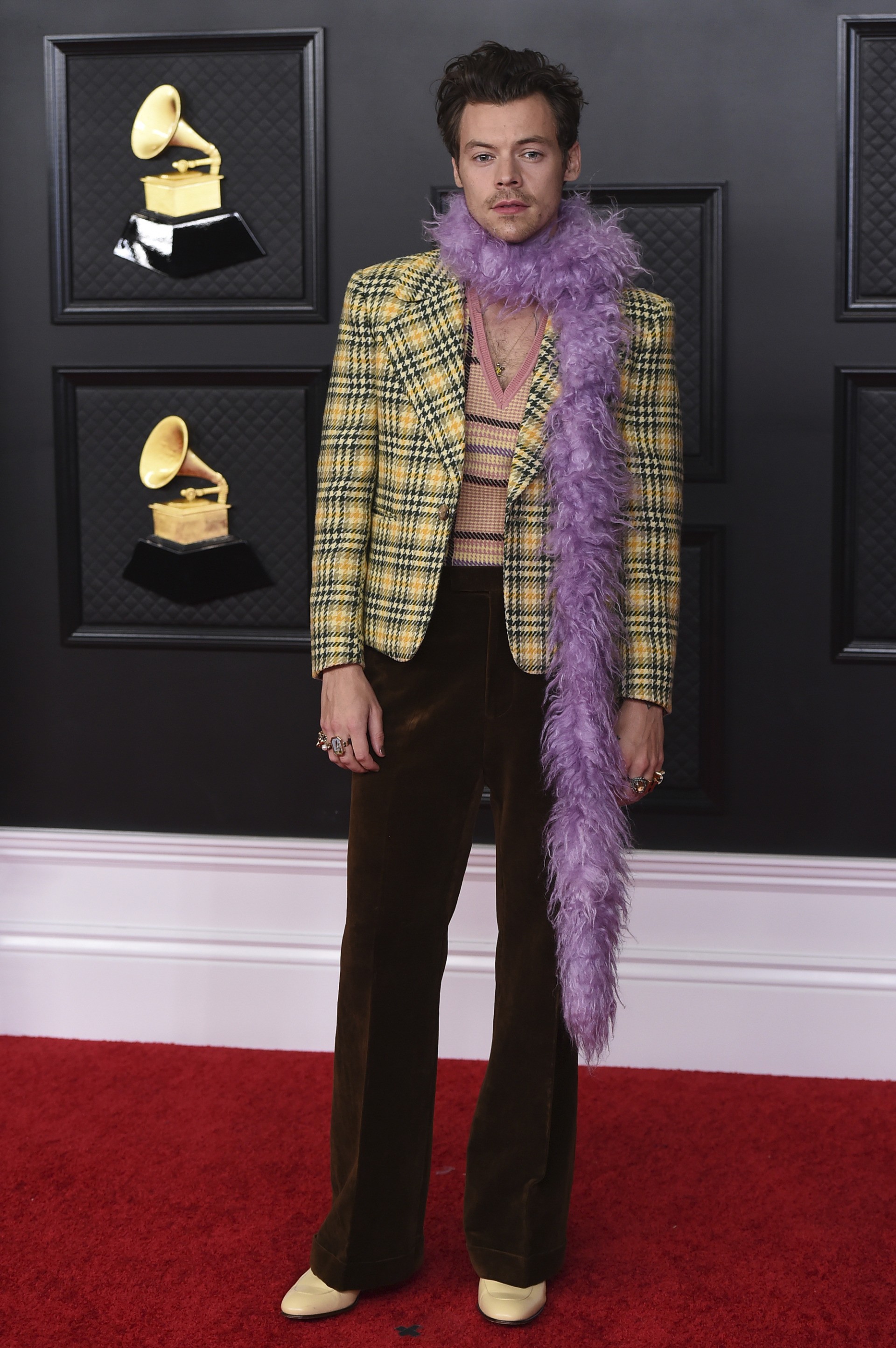 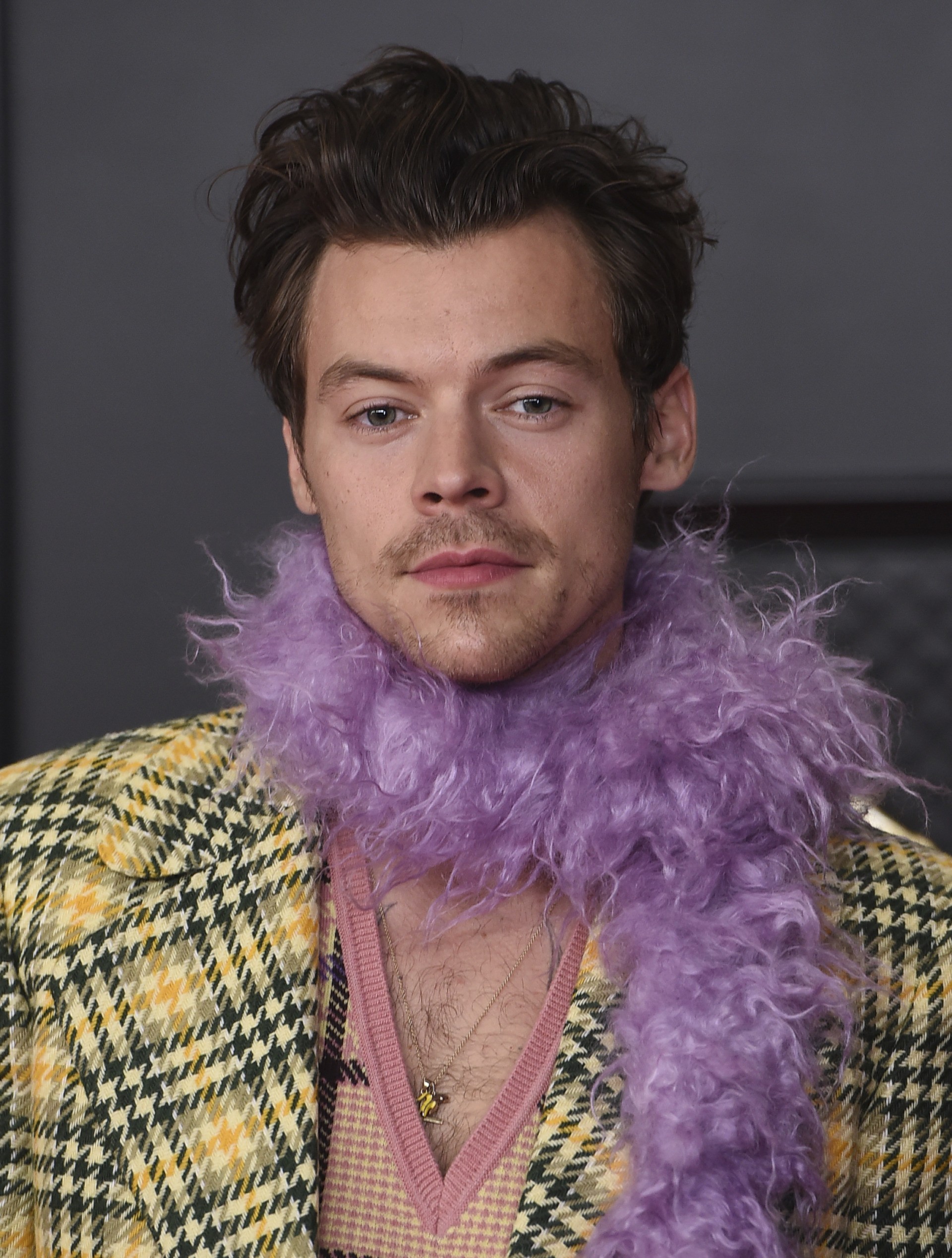 Singer Billie Eilish has a particular wardrobe and that is quite clear at this point. The head-to-toe matching print Gucci hat, mask, shirt, gloves, nails, and pants are a rendition of what she has worn to nearly every red carpet she has attended.

I’m not saying I hate this aesthetic, it’s just that I never want to see it again. 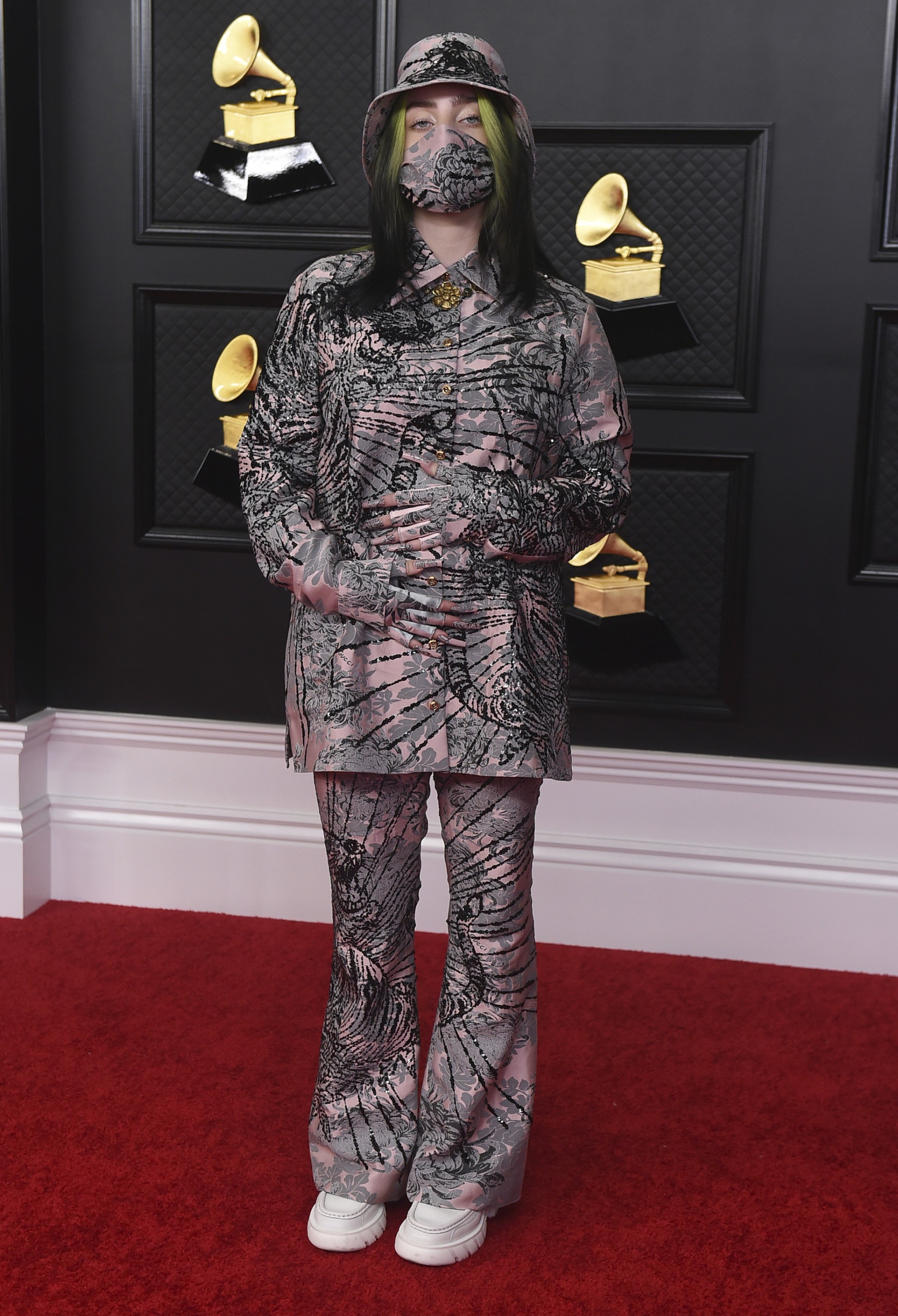 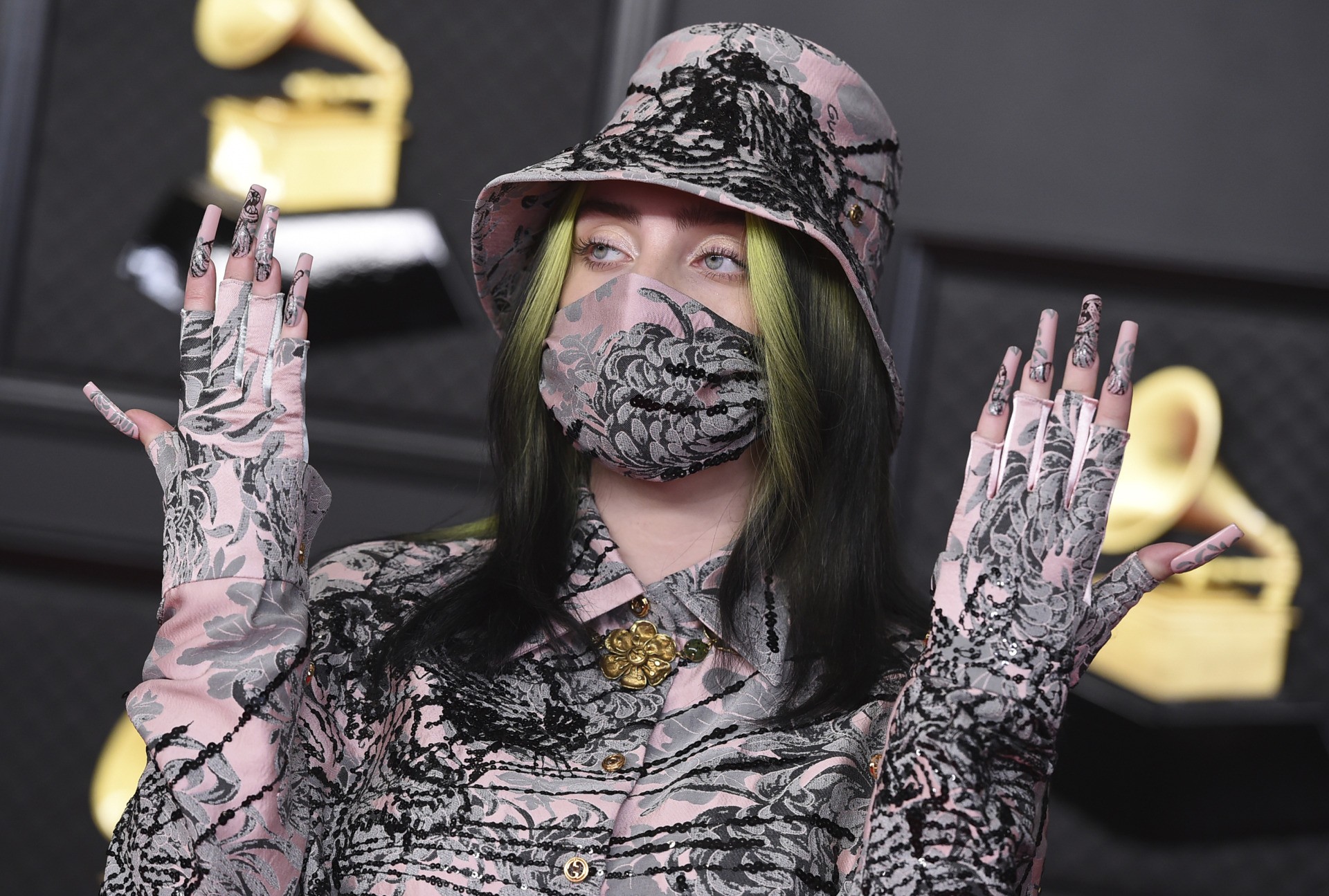 Country singer-turned-popstar Taylor Swift can be, how to put this nicely … cringey. Taylor’s wardrobe once reflected her humble upbringing and her affection for vintage styles like red lipstick, square-toed flats, and 1950s-inspired high-waisted button shorts.

Cute was always her thang. But then, somewhere in the last five years Taylor seemed to drift off into branches of fashion that never appeared to fit her.

For the Grammys this year, her choice of a flower-power Oscar de la Renta embroidered mini dress (available online for about $9,000) feels like she’s back to a style that was always hers but she hadn’t yet claimed. The details on this garment are exquisite and the subtle pink suede heels with bows on each angle are a feminine touch on top of an already feminine ensemble.

Tousled braids, tendrils, and bangs work fittingly. I’m not sure I’d change much of anything here, except for maybe begging her not to cringe dance. 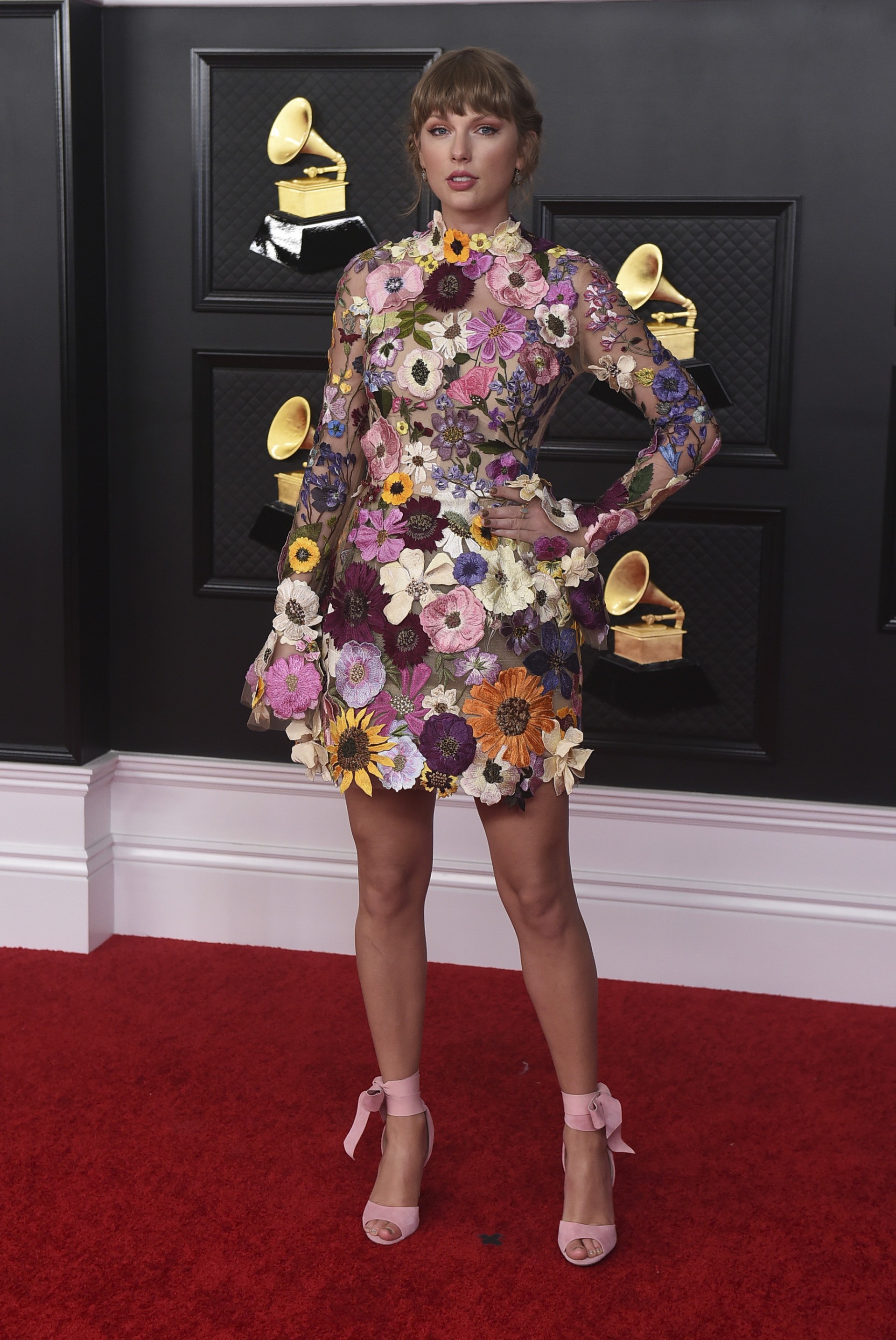 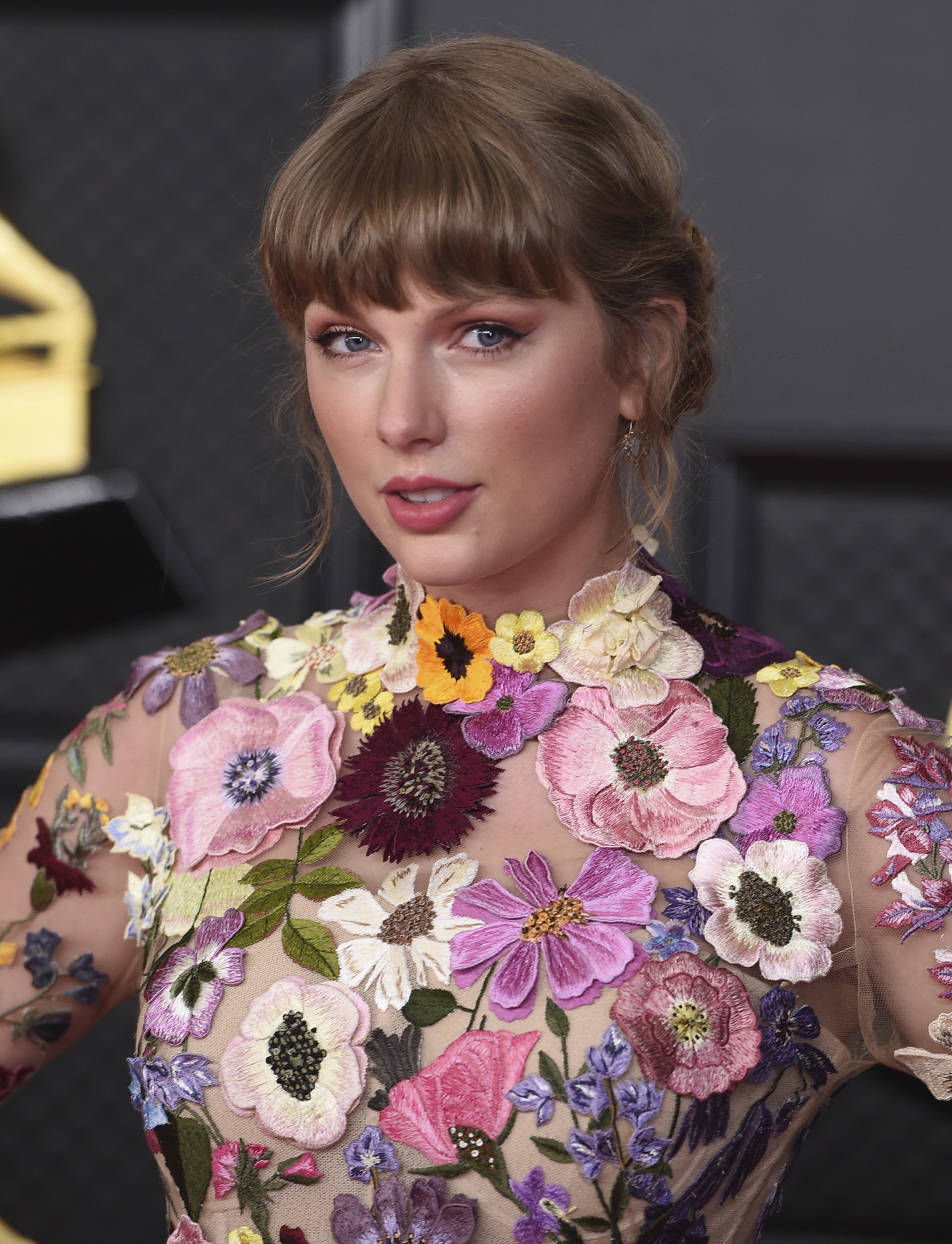 There are marvelous things happening at the house of Schiaparelli these days and I encourage any fashion lover to check out the creations of American designer Daniel Roseberry who is currently the label’s creative director.

For Noah Cyrus (Miley Cyrus’ younger sister), this Schiaparelli gown is beyond an overwhelming disaster. If I did nothing else but remove the giant, billowing papier-mâché shrug surrounding her head, there would still be issues with the gown.

The neckline, for one, looks to be too plunging — almost like the bodice was made for a woman with a much longer torso. And the way the fabric gathers into a swoop at Noah’s kneecaps is distracting and creates for the strangest skirt that seems to taper with darts below the knee.

Of course, Noah did not do herself any favors by unnecessarily loading up on rings and necklaces and bracelets and earrings and throwing her hair up into a sumo bun. Even in a landfill, this look would be one of the uglier items you find. 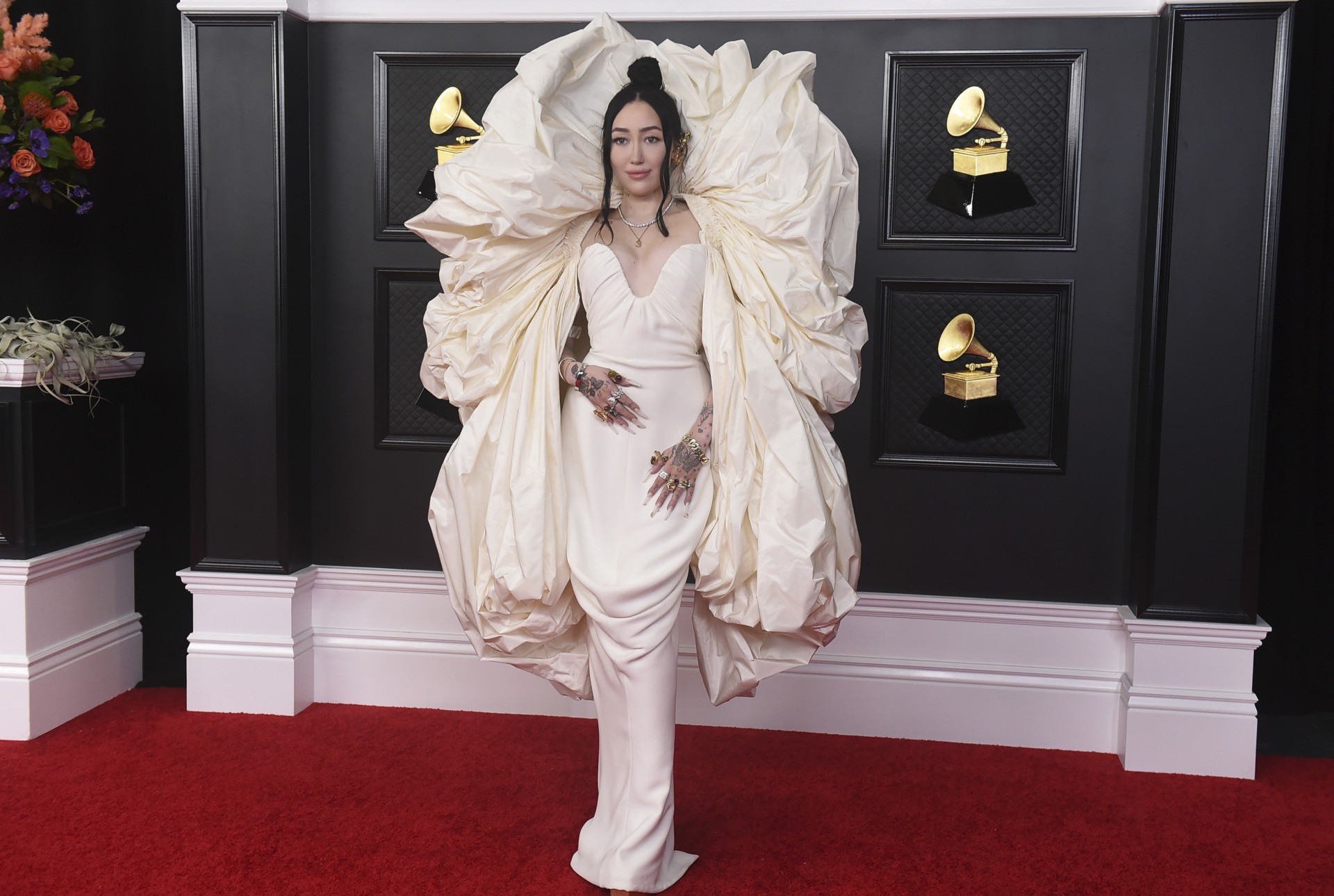 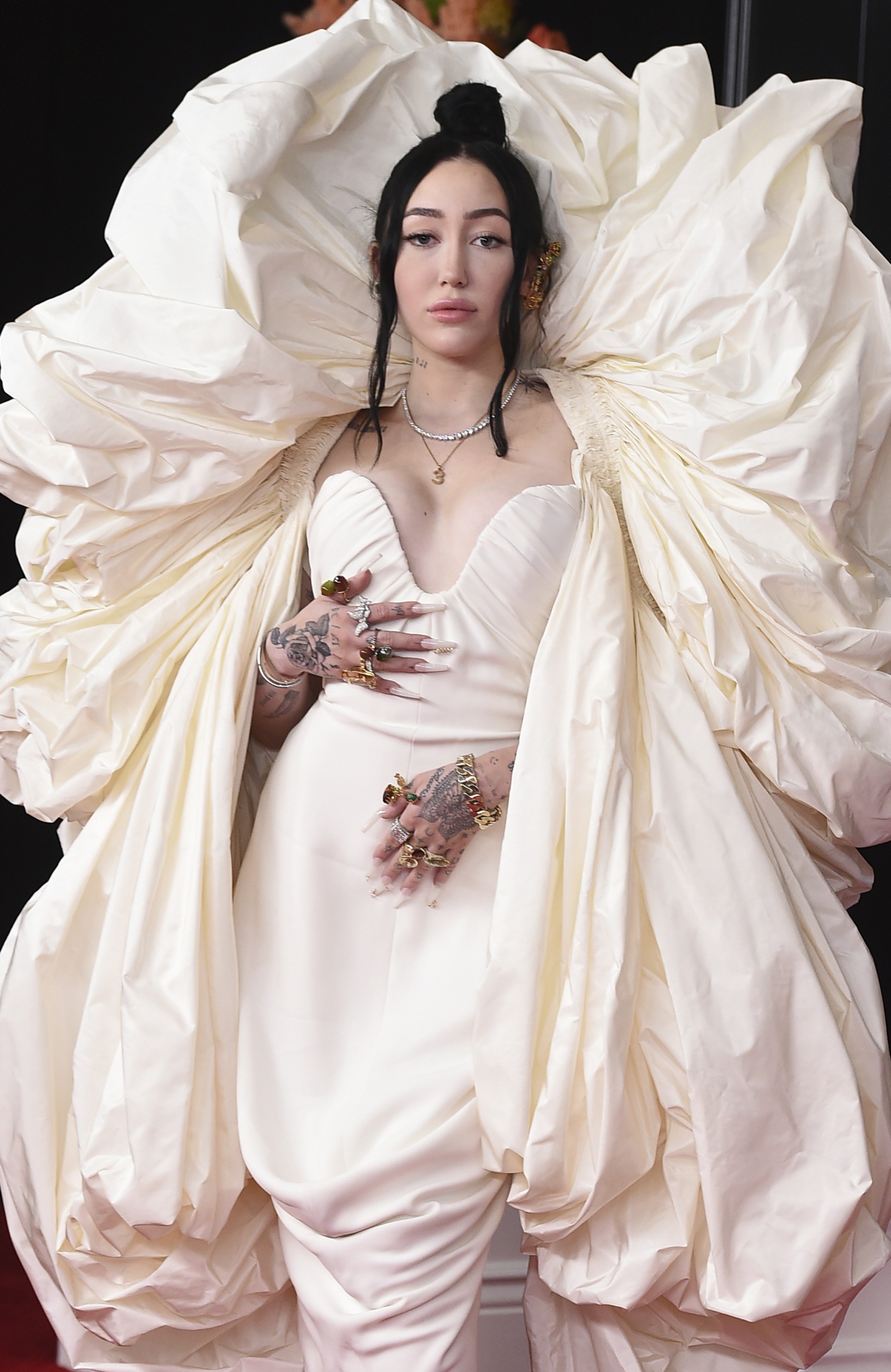