NEW YORK (AP) — Hundreds of theater workers marched down Broadway on Thursday, rallying to demand more inclusion in the industry, protesting producer Scott Rudin and to call for greater transparency from the Actors’ Equity Association union.

Organizers had several demands, including finding how 2020 Equity dues were spent and what percentage is used to help conversations around diversity. They demanded greater inclusion for transgender, nonbinary and gender-nonconforming artists and urged efforts to improve diversity within the labor union’s council.

Much of the ire was directed at Rudin, who continues to face fallout following renewed accusations of bullying and harsh treatment of his employees. He has s aid he will step back from theater and film projects to “work on personal issues I should have long ago.”

Speaker after speaker on Thursday cursed his name and demanded he be removed from The Broadway League, the powerful group of theater producers. “Hey, hey, ho ho. Scott Rudin has got to go!” the crowd chanted. The League has not commented on the demand.

“What do we want? Justice! When do we want it? Now! If we don’t get it? Shut it down,” the crowd roared during the march into the heart of Times Square after speakers began the march in Columbus Circle. There was also a dance party outside Rudin’s offices.

The crowd then paused in front of Equity headquarters to air their grievances, including not protecting workers who allege harassment and how the organization, which represents 51,000 actors and stage managers, uses the dues from members. Many vowed not to go back to work and not to pay their dues unless their demands were met.

In response, the union issued a statement, stating that “diversifying Equity leadership is an important step for the union to become an antiracist organization, and that work is ongoing.” The union also noted that its council had just selected Wydetta Carter as a new first vice president, the first Black person in over 40 years. “The union is working to share additional information on spending regarding diversity and inclusion,” it said.

The homemade signs at the march ranged from the blunt — “Burn It Down” and “Black Trans Artists’ Lives Matter” — to the theatrical, including “We Got Trouble” and “This is Literally the Plot of ‘Newsies.’” Some in the crowd wore “Cats” and “Harry Potter and the Cursed Child” hoodies. 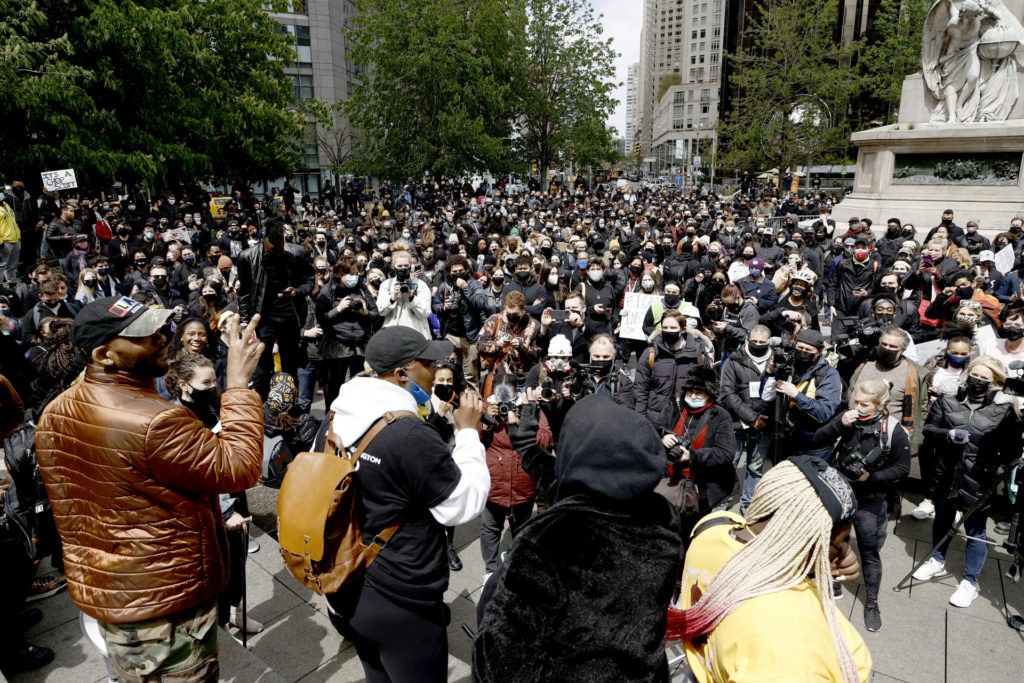 Protesters gather in Columbus Circle during a march against racism and inequality in the theater industry on April 22, 2021 in New York City. (Photo by Jamie McCarthy/Getty Images)

The march and rally was organized by Nattalyee Randall and Courtney Daniels. One of the speakers was Broadway actor Ashley De La Rosa, who said she has lost count of how many times she was the only Black person in the room. “There is a culture of white supremacy that is built into this industry and into our world that tells us that we can’t,” she said. “This must change before we return to work.”

Actor Ryan J. Haddad lamented that disabled and deaf actors are often invisible in the theater community. “We belong in the room. We are every one of you,” he said. “We have the talent. We have the skills. We need the support.”