Actor James Franco — who publicly supported the celebrity-backed Time’s Up anti-sexual harassment group — and his associates have agreed to pay a $2,235,000 payout to settle a sexual misconduct lawsuit filed against him last year.

In the lawsuit filed in October of 2020, Franco was alleged to have cajoled film students to commit to increasingly explicit sex scenes on camera. The students, who studied under Franco at Studio 4 Film School in New York and Los Angeles, also said they were the victims of fraud.

Franco, the suit said, “sought to create a pipeline of young women who were subjected to his personal and professional sexual exploitation in the name of education.”

The settlement has been agreed upon by Franco’s party as well as parties to the suit, Tither-Kaplan, Gaal, and the other students left unnamed.

The case is a class action suit and because of that, the terms of the settlement have been made public, the Hollywood Reporter noted.

For instance, we now know that if the deal is approved by a judge, Tither-Kaplan will receive $44,700, while Gaal will receive $149,000. Meanwhile, the lawyers will receive 298,000. Remaining money will be go to either the remaining plaintiffs in the class action or attorneys. Whatever remains of the $2,235,000 will be donated to the National Women’s Law Center.

The students will also sign an agreement to release any fraud claims.

Finally, all parties on both sides will sign an agreement that Franco and the acting school don’t admit to abuse or fraud, but do “acknowledge that Plaintiffs have raised important issues; and all parties strongly believe that now is a critical time to focus on addressing the mistreatment of women in Hollywood. All agree on the need to make sure that no one in the entertainment industry — regardless of race, religion, disability, ethnicity, background, gender or sexual orientation — faces discrimination, harassment or prejudice of any kind.”

The A-list star, who burst on the scene in Judd Apatow’s late 90s comedy Freaks and Geeks and later starred in the Spiderman trilogy and the Planet of the Apes reboot, showed vocal and public support for the Hollywood celebrity-backed anti-harassment group Time’s Up. He donned the group’s pin while attending the 75th annual Golden Globe Awards. 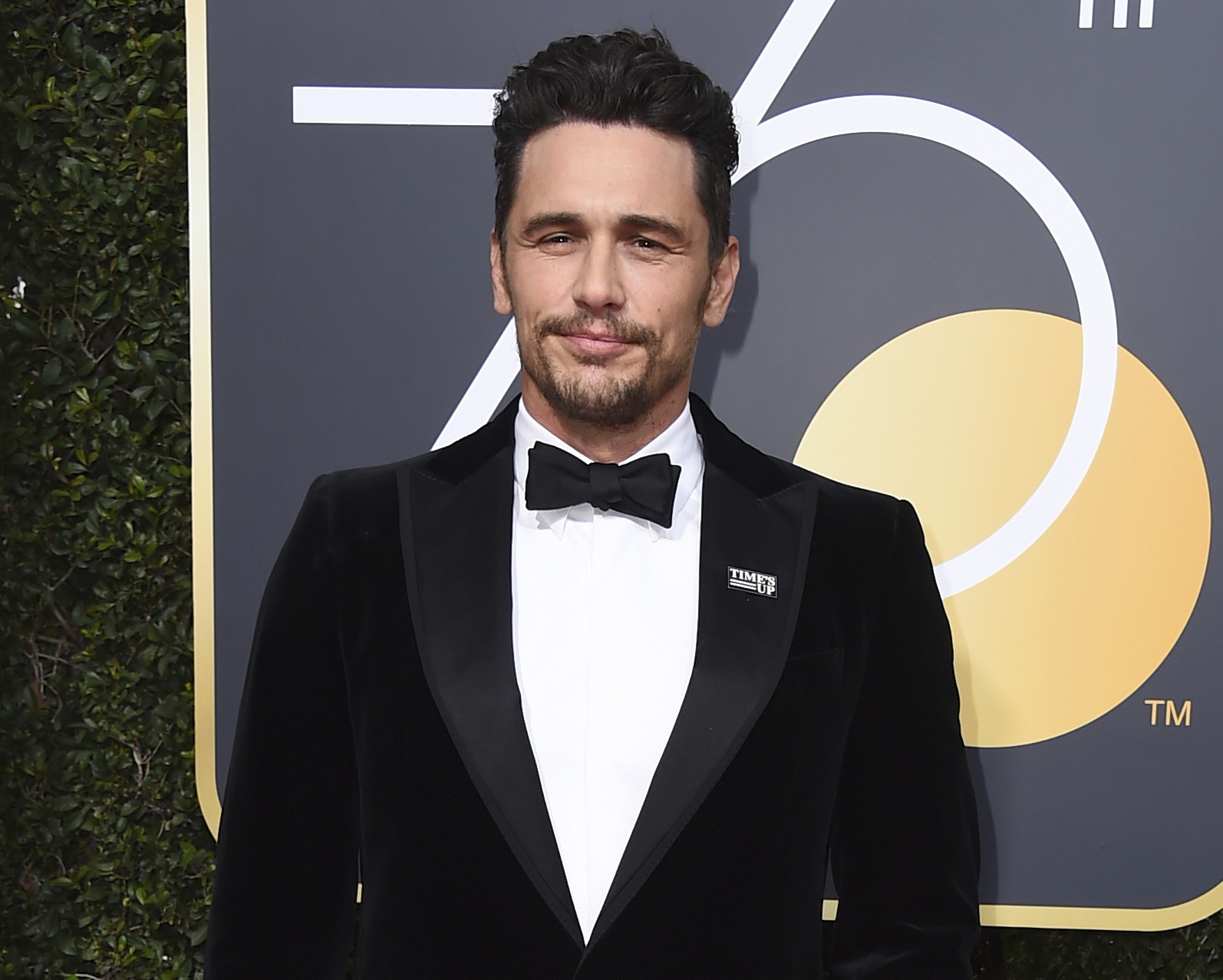 James Franco arrives at the 75th annual Golden Globe Awards in Beverly Hills, Calif. Facing accusations by an actress and a filmmaker over alleged sexual misconduct, James Franco said on CBS’ “The Late Show with Stephen Colbert” on Tuesday the things he’s heard aren’t accurate but he supports people coming out “because they didn’t have a voice for so long.” (Jordan Strauss/Invision/AP, File)

Indeed, the suit is impacting his career. One of Franco’s long-time collaborators, Seth Rogan, has distanced himself from his old pal. Rogan, who’s worked with Franco on several films, including Pineapple Express, This Is the End, The Interview, Sausage Party, and The Disaster Artist, announced that he has no plans to work with Franco. Rogan’s headline-making comments came not long after charges of misconduct against Franco were voiced by actress and comedian Charlyne Yi.

Like many other members of the Hollywood elite, Franco went all out for Hillary Clinton in 2016.

In October of that year, he proclaimed Hillary the “most interesting woman in the world” when he publicly endorsed her for president over Donald Trump. In Sept. of 2016, Franco added his support for Hillary by joining an anti-Trump video created by Avengers director Joss Whedon.

Trump, of course, beat Hillary despite the aid Franco doled out. And after Trump’s victory, Franco insisted that he “spiraled into depression” because Hillary Clinton lost.