First there was the podcast. Now comes the book. Former President Barack Obama and left-wing rocker Bruce Springsteen have agreed to release a bound edition of their “Renegades” podcast featuring conversations on everything from fame, cars, toxic masculinity, race, and the future of the country.

Renegades: Born in the USA is the title of planned bound edition of their digital exchanges, according to the Associated Press. Penguin Random House and Obama’s Higher Ground company announced Thursday that Renegades will come out October 26.

The $50 book will include rare photographs, handwritten Springsteen lyrics, and annotated Obama speeches.

Bruce Springsteen's Trump Derangement Syndrome is worse than ever. https://t.co/jECz5v0oyf

“Over the years, what we’ve found is that we’ve got a shared sensibility,” Obama said in a statement. “About work, about family, and about America. In our own ways, Bruce and I have been on parallel journeys trying to understand this country that’s given us both so much. Trying to chronicle the stories of its people. Looking for a way to connect our own individual searches for meaning and truth and community with the larger story of America.”

One podcast episode included Obama revealing his conversation about toxic masculinity with his daughters. The former president also recalled punching someone for calling him a racial slur.

As Breitbart News reported, Springsteen’s dedicated support of Obama spans back to 2008 as the then-senator faced off against the late Sen. John McCain (R-AZ). The “Glory Days” crooner supported Obama again in 2012, calling him the “best choice to get us and keep us moving in the right direction.”

Obama returned the favor and awarded Bruce Springsteen with the Presidential Medal of Freedom in a star-studded ceremony in November 2016, celebrating him as one of several Americans who “have lifted our spirits, strengthened our union, pushed us towards progress” and crediting Springsteen for crafting “anthems of our America, the reality of who we are and the reverie of who we want to be.” 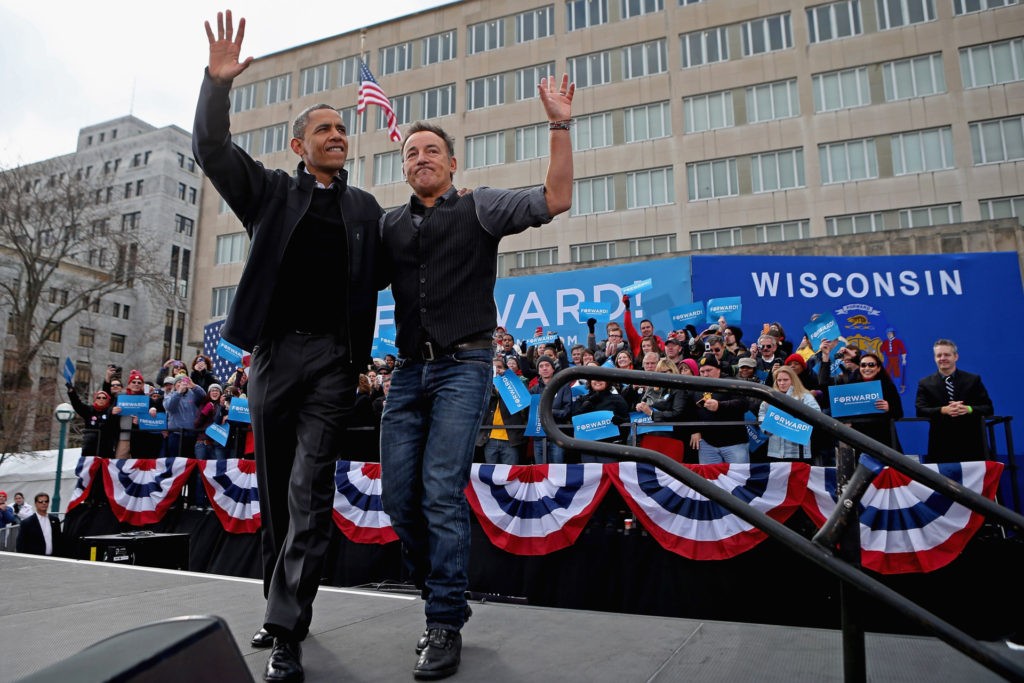 U.S. President Barack Obama and rocker Bruce Springsteen wave to a crowd of 18,000 people during a rally on the last day of campaigning in the general election November 5, 2012 in Madison, Wisconsin. (Chip Somodevilla/Getty Images)

Springsteen threatened to pack up and flee the U.S. for Australia if Donald Trump won re-election in last November.

“I love Australia,” Springsteen gushed to the Australian press. “Every time, we have nothing but good times down there. It’s always a treat to come. Love the people, love the geography, great place for motorcycle trips, it’s close to our hearts.”

A few months before the E Street Band frontman called President Trump a “threat to our democracy,” and worried if “our democracy could stand another four years of his custodianship.”

Now Springsteen claims he can rest easy with President Joe Biden in the White House.

Multi-Millionaire Bruce Springsteen Provided the Musical Theme for the DNC "Rise Up" https://t.co/T5dcfIua10

In an introduction for the book, Springsteen wrote he and Obama had raised serious issues about the “fate of the country, the fortune of its citizens, and the destructive, ugly, corrupt forces at play that would like to take it all down” before Biden assumed office.

Now the pair believe Joe Biden represents the last great hope for the future of the country and a light on the hill for the forces of democracy.

“This is a time for serious consideration of who we want to be and what kind of country we will leave our children,” wrote the singer. “Will we let slip through our hands the best of us or will we turn united to face the fire? Within this book you won’t find the answers to those questions, but you will find a couple of seekers doing their best to get us to ask better questions.”