Former President Barack Obama and left-wing rocker Bruce Springsteen teamed up for a new podcast, Renegades: Born in the U.S.A., featuring the two discussing a variety of topics, including “race, fatherhood, marriage, and the state of America.”

“On the surface, Bruce and I don’t have a lot in common. He’s a white guy from a small town in Jersey. I’m a black guy of mixed race born in Hawaii. He’s a rock-n-roll icon. I’m not as cool,” Obama said. “In our own ways, Bruce and I have been on parallel journeys trying to understand this country that’s given us both so much.”

Springsteen shared a preview of the podcast on Monday, which ended with a series of images, including Obama stumping for President Biden and Vice President Kamala Harris, whom the rocker supported in the lead-up to the election. He eventually went on to perform at Biden’s primetime inauguration celebration.

Bruce joins President @barackobama for a long and meaningful conversation that touched on so much of what we’re all dealing with these days. Listen to the first two episodes of their new podcast Renegades: Born In The USA now on @spotify. https://t.co/D7hvKyCxxQ pic.twitter.com/zFfSLyedWn

Springsteen’s support of Obama spans back to 2008 as the then-senator faced off against the late Sen. John McCain (R-AZ). The “Glory Days” crooner supported Obama again in 2012, calling him the “best choice to get us and keep us moving in the right direction.”

“We’re still living through very hard times but justice, equality and real freedom are not always a tide rushing in. They are more often a slow march, inch by inch, day after long day. I believe President Obama feels these days in his bones and has the strength to live them with us and to lead us to a country ‘…where no one crowds you and no one goes it alone,'” Springsteen said at the time.

Obama awarded Bruce Springsteen with the Presidential Medal of Freedom in a star-studded ceremony in November 2016, celebrating him as one of several Americans who “have lifted our spirits, strengthened our union, pushed us towards progress” and crediting Springsteen for crafting “anthems of our America, the reality of who we are and the reverie of who we want to be.” 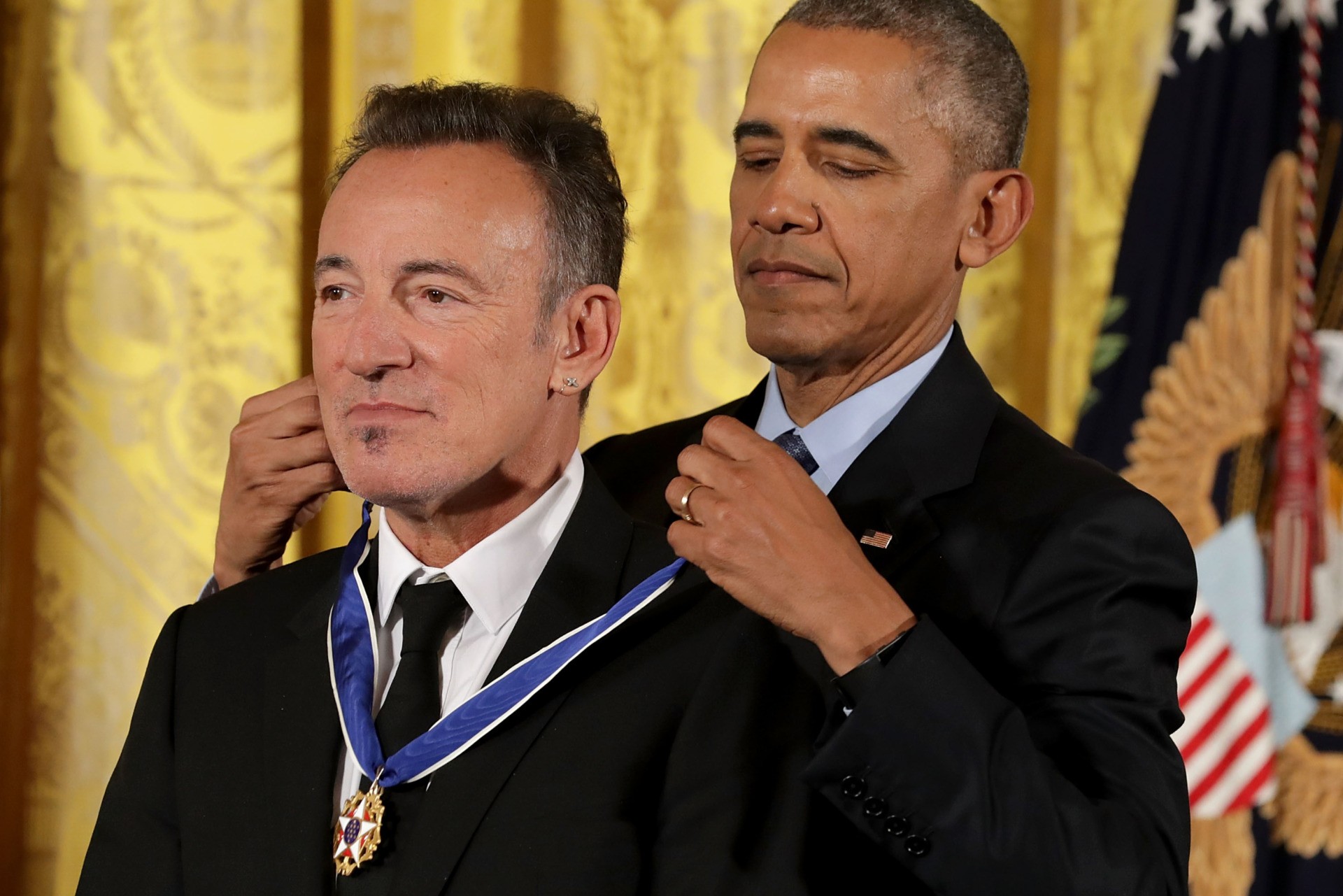 President Barack Obama awards the Presidential Medal of Freedom to popular music singer, songwriter and rock and roll legend Bruce Springsteen during a ceremony in the East Room of the White House November 22, 2016 in Washington, DC. Obama presented the medal to 19 living and two posthumous pioneers in science, sports, public service, human rights, politics and the arts. (Chip Somodevilla/Getty Images)

The news comes as Springsteen continues to face fallout over a November 14 DWI arrest, facing charges which include driving while intoxicated, reckless driving, and consuming alcohol in a closed area. He is expected to appear in court on Wednesday.

The former president is hardly the only Democrat politician to expand into podcasts in recent months. Spotify launched the “The Michelle Obama Podcast” featuring former first lady Michelle Obama last year. She made waves in one episode after criticizing white Americans, contending that they treated her as if she did not exist.

“That is so telling of how white America views people who are not like them, like we don’t exist. And when we do exist, we exist as a threat. And that’s exhausting,” she said.

Twice-failed presidential candidate Hillary Clinton also launched a podcast ahead of the 2020 presidential election titled “You and Me Both with Hillary Clinton,” interviewing a range of personalities, from activist Gloria Steinem to House Speaker Nancy Pelosi (D-CA). Her husband, former President Bill Clinton, has followed suit, launching his podcast Why Am I Telling You This? with iHeartMedia.

“He has the rare gift of having both a deep intellect and an innate ability to relate to people from all walks of life,” John Sykes, president of entertainment enterprises for iHeartMedia said of Clinton, describing him as a “born storyteller. And his curiosity about the people and ideas that make up our world is contagious.”