Andy Serkis, the director for Sony’s upcoming Spider-Man spinoff, Venom: Let There Be Carnage, said that the film represents the alien symbiote’s gay “coming out party” and depicts a “love affair” between the CGI alien and star Tom Hardy.

Speaking to Uproxx, Serkis claims that a key scene is based on an LGBT-themed festival and represents Venom’s coming-out party. In the comics, Venom is a member of the Klyntar race of symbiotes that possess the bodies of other beings, and after failing to bond with Spider-Man, the symbiote finds troubled reporter Eddie Brock.

In the scene, the alien symbiote that had bonded with Brock (Tom Hardy) has an argument with Eddie, separates from the reporter, and then attends a rave party to drown its sorrows. At one point, the symbiote delivers a heartfelt speech to the crowd talking about how much he misses Eddie. This, Serkis says, is to symbolize the queer relationship the symbiote and Eddie have. It is, Serkis added, a gay love story.

Serkis told Uproxx that the original idea for the scene was that it was like “the carnival of the damned,” but that focus changed.

“Well, Tom and [co-writer] Kelly [Marcel] were always about Venom coming out and going to a party that was a very sort of an LGBTQIA kind of festival, really, I’d call it, and so this is his coming out party basically. This is Venom’s coming-out party,” Serkis said.

Serkis insists that during the scene, Venom begins to “speak for the other” — “inadvertently” advocating for the LGBTQ community.

“Well, what is interesting is that it’s just like, here he is kind of, he says in the movie, ‘We must stop this cruel treatment of aliens.’ He said, ‘You know, we all live on this ball of rock,’ you know? And so, he inadvertently becomes a kind of… he’s speaking for the other. He’s speaking for freedom of the other,” Serkis enthused.

The director, also famous for giving life to the Lord of the Rings character Gollum, then claimed that the movie is really a “love affair” between the symbiote and Eddie. 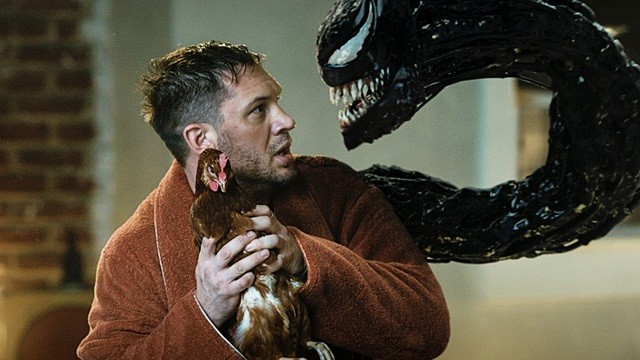 “Absolutely they do love each other and that’s the kind of the center of the movie is that love affair, that central love affair,” he said.

Venom: Let There Be Carnage opens in theaters on October 1st.