The teen drama, One of Us Is Lying, which runs on NBC’s streaming service Peacock, ended its season with a plot following a school teacher who helps a teen get a secret abortion without her parents’ knowledge.

The abortion was a subplot to the murder mystery series in which high school teacher Ms. Avery (Andi Crown) helps teen student Vanessa (Sara Thompson) get the abortion behind her parents’ back, Newsbusters reported.

The series follows the murder of a student in school who had a peanut allergy and whose drink was laced with peanut oil. The series then follows the students as they create a “murder club” to investigate and find out who the murderer is. The series is typical of so many of these streaming shows aimed at young people, filled with adult content including violence, sex, drugs, and foul language.

As the season came to a close, a named student Vanessa comes under suspicion for being seen meeting secretly with a teacher, Mrs. Avery. Ultimately, Vanessa admits that she was meeting with the teacher because Mrs. Avery was helping her get an abortion. 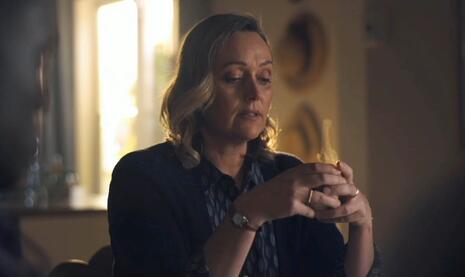 Andi Crown plays Ms. Avery in One of Us Is Lying. NBC/Peacock

Vanessa goes on to call the teacher a “good person” because she helped her get an abortion. Vanessa also says she is proud of herself for getting the secret abortion.

“Ms. Avery was there for me because she’s a good person. She’s like the opposite of a killer. I mean, unless you’re my parents. If they found out, they would say we’re both baby killers,” Vanessa tells her friend, Addy (Annalisa Cochrane).

WATCH BELOW (via MRC):

The teacher chimes in saying, “I know what you all think of me, but I’m not a monster. I do actually care about my students.” And added, “I helped Vanessa when she needed it, and in doing so, I violated school rules.”

Vanessa goes on to say that the teacher made the doctor’s appointment, drove her to the facility, and then paid for the abortion, “so my parents would never find out.”

“Look, I’m not ashamed about what I did. I just really don’t want Ms. Avery to get punished for being nice to me,” Vanessa said.