The Screen Actors Guild’s written rules on safety in film and television make clear that actors should never point a firearm at anyone.

Written in 2009, the 65-page safety bulletin lays out the rules for all kinds of safety issues, but on the subject of how actors should use firearms, SAG is unambiguous:

Treat all weapons as though they are loaded and/or ready to use. Do not play with weapons and never point one at anyone, including yourself. Follow the directions of the Property Master and/or Weapons Handler regarding all weapons. [emphasis original]

If there’s one thing we know for sure about the terrible accidental shooting on the set of the low-budget Western Rust that took the life of a 42-year-old cinematographer, it’s that star/producer Alec Baldwin pointed a working gun at someone.

Something else we know from early reports is that Baldwin was unaware the gun was “hot” or loaded with anything that would fire, including blanks. In fact, early reports tell us he believed he was being handed a “cold gun,” or a gun that would not fire in any way if the trigger was pulled.

Furthermore, it’s been reported that the gun went off during a rehearsal while Baldwin drew the gun. We don’t yet know if he pulled the trigger or if the gun misfired in some other way. There are reports of other misfires on the set (a misfire is when a gun goes off accidentally), but there is no question he was pointing the gun at someone. 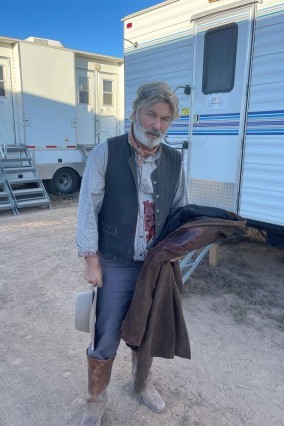 Let me again point out that I’m in no way assessing blame. This is simply a matter of reporting context the establishment media are not interested in reporting. Those following the story can already see the kangaroo court of the establishment media zeroing in on Rust’s assistant director and the 24-year-old armorer. Both might very well be responsible, but we simply do not know everything, and when you have far-left NBC News already basically clearing Baldwin and doing so before all the facts are known, that is more than a little troubling.

Keep in mind that Alec Baldwin is big money for far-left NBC. For years, his Trump impersonation was a cornerstone of the network’s fading Saturday Night Live franchise, and he starred on 30 Rock, an NBC sitcom with 139 episodes in lucrative syndication.

Something else being reported is that the assistant director handed Baldwin the gun, declared it a “cold gun,” and then the ill-fated rehearsal commenced. But there are no reports Baldwin inspected the weapon himself. He might not be officially required to do so, but two established actors say it is procedure to actually prove to the actor the gun is cold, not just hand it to them:

“I don’t recall ever being handed a weapon that was not cleared in front of me — meaning chamber open, barrel shown to me, light flashed inside the barrel to make sure that it’s cleared,” [Jeffrey] Wright said. “Clearly, that was a mismanaged set.”

Actor Ray Liotta agreed with Wright that the checks on firearms are usually extensive.

“They always — that I know of — they check it so you can see,” Liotta said. “They give it to the person you’re pointing the gun at, they do it to the producer, they show whoever is there that it doesn’t work.”

If this is procedure, why didn’t Baldwin, a producer on the film and one with decades of set experience, demand to be shown the gun the cold or check for himself?

Regardless of where the fake media want to take the story, these questions must be answered.

No one believes Baldwin in any way intended to hurt or kill anyone. In that respect, my heart breaks for him. I can’t imagine what he’s going through. But the question of negligence matters. A young wife and mother were killed, and one thing we know for sure is that if safety procedures had been followed, she would be alive today.

There must be accountability.