President Joe Biden will face Jimmy Fallon late Friday as a guest on The Tonight Show for a cosy chat in his first appearance as commander in chief.

Variety reports Biden’s segment will be virtual and will come just hours after it was revealed U.S. inflation hit a 40-year high in November.

Tomorrow night is going to be a big show: President @JoeBiden is here! #FallonTonight pic.twitter.com/PweFoBb4SY

The head-to-head between the two comes as Biden’s numbers tank across the country and voters turn on him and his administration over a host of issues ranging from the retreat from Afghanistan to the economy, inflation, supply chain hold ups and the price of gas at the pump.

Many Democrats are concerned Biden’s sinking polling numbers “will lead to a thrashing at the ballot box” in the 2022 midterm elections, Politico reported on Monday.

Former President Obama was a regular visitor to the late night celebrity host’s guest chair during his presidency. He was the last president to be interviewed on late night shows while in office, appearing on programs hosted by Stephen Colbert, Jimmy Kimmel, Bill Maher and Samantha Bee as well. 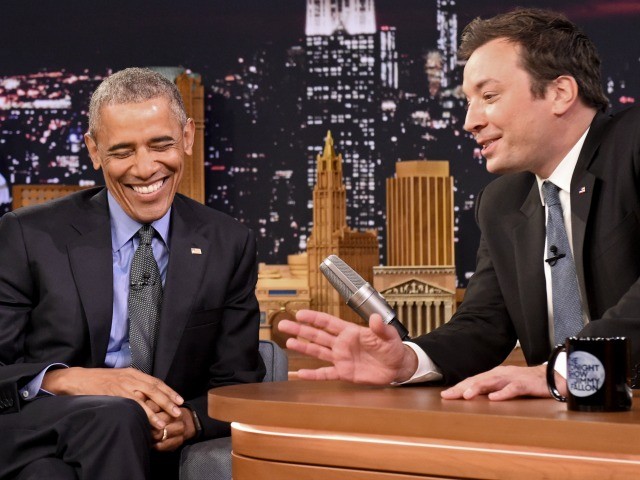 President Barack Obama speaks with Jimmy Fallon on the ‘The Tonight Show Starring Jimmy Fallon’ on June 8, 2016 in New York City. He was the first sitting president to grace the show.

Then-presidential candidate Donald Trump was interviewed on Fallon’s show in September 2016, but rejected late night talk show appearances during his residency at the White House.

Biden has notoriously given less one-on-one interviews than his predecessors.

Ronald Reagan, who was shot in the lung by a would-be assassin shortly after taking office, more than doubled Biden’s first-year interviews, giving 46 by the same point in his presidency.

Biden waited the longest of any other president in the last nearly 100 years to hold a formal question-and-answer session, 64 days after taking office.

When Biden has chosen to talk with the media, his choice of ice cream flavor has been a dominant point of engagement for the (mostly) tame Washington press corps.

He also holds strong views on the weather.

Biden on Tornadoes: "They Don't Call Them that Anymore" pic.twitter.com/lqXirKKUDX

For his part, Fallon has drawn criticism for his soft, fawning interviews with Democrat politicians from all levels of government.

As Breitbart News reported, in 2015 he pleaded for understanding, saying it is not his job to ask tough questions of controversial public figures.

“That’s not my job,” Fallon said of going in-depth on the issues. “It’s not Meet the Press. I’m not Face the Nation.”