Country star John Rich has released his new anti-woke anthem, the ironically titled “Progress,” which has reached the No. 1 spot on iTunes’ country music chart after the singer promoted the single on former President Donald Trump’s Truth Social platform.

“Progress,” which was written by John Rich along with Jeffrey Steele and Vicky McGehee, strikes a defiant stance against the left-wing, progressive policies that have led to the U.S.’s precipitous decline under President Joe Biden. The song’s refrain encapsulate Rich’s fed-up attitude:

Stick your progress where the sun don’t shine

Keep your big mess away from me and mine

If you leave us alone, well we’d all be just fine

Stick your progress where the sun don’t shine.

In a Truth Social post on Friday announcing the new song, Rich described the new song as “my message to the tyrants running our country into the ground.” 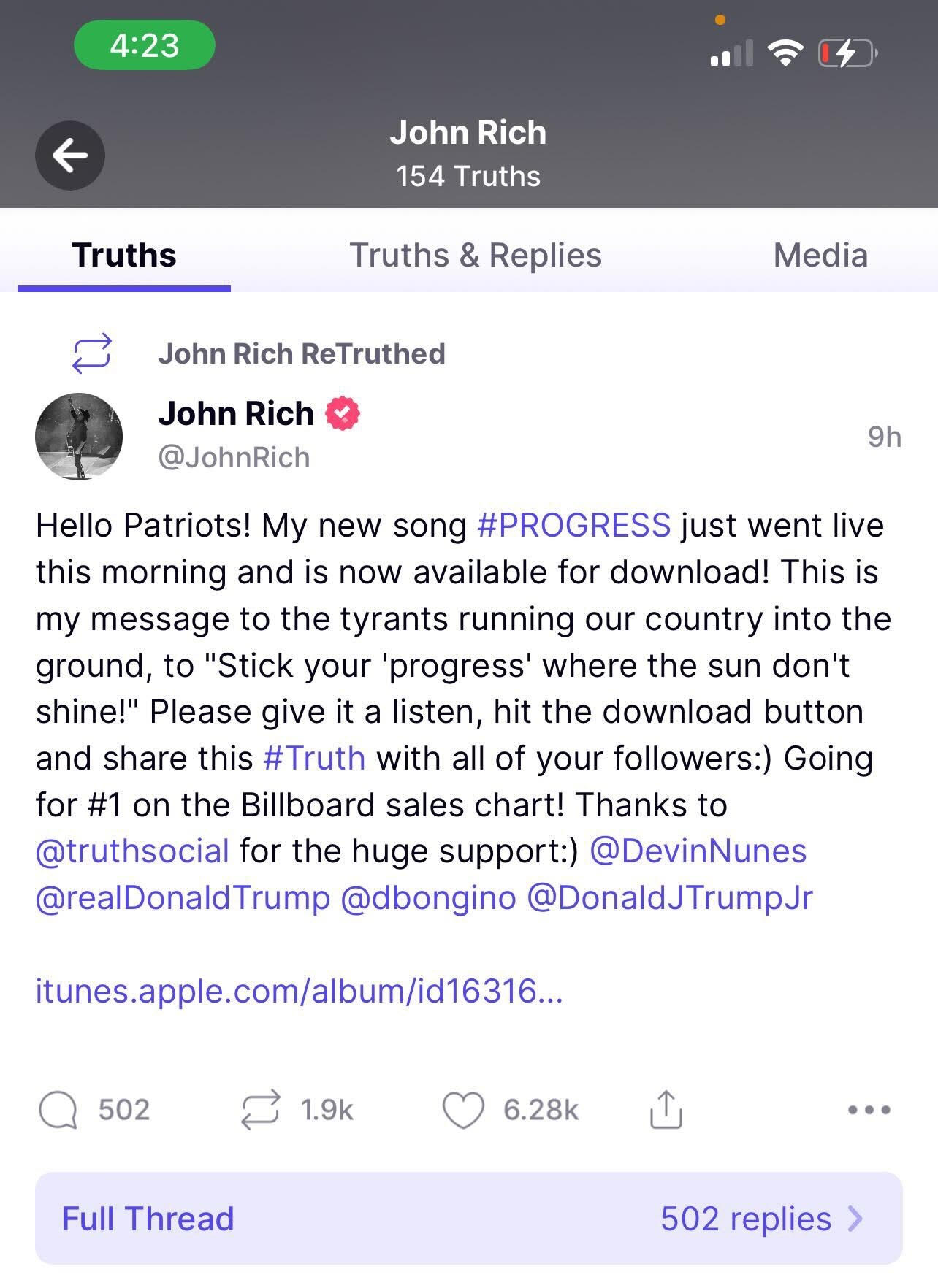 The music video for “Progress” presents a montage of the country’s so-called “progress” under the influence of the left  — empty grocery store shelves, skyrocketing energy prices, baby formula shortages, rioting in the streets, and widespread urban breakdown.

The video concludes with shots of Americans of various ethnicities and religions celebrating their patriotism and love of country.

They say building back better will make America great

If  that’s the wave of the future, all I’ve got to say…

The song then addresses Biden’s open-border immigration policy, his catastrophic withdrawal from Afghanistan that led to the deaths of 13 U.S. service members, and his domestic policies that have attempted to curtail the freedom of speech.

They invite the whole world to come live in our land
And leave our countrymen dying in Afghanistan
They say let go of Jesus, let government say
You can have back your freedoms if you do what we say

The most defiant lyrics comes toward the end, when Rich invokes Biden’s authoritarian policies and the populist right’s revolt against it.

Jeffrey Steele, who co-wrote the song, released the recent single “Walk Toward the Fire,” a tribute to the late Andrew Breitbart to help mark the tenth anniversary of his death, which he penned with Breitbart’s own Jon Kahn.
Follow David Ng on Twitter @HeyItsDavidNg. Have a tip? Contact me at dng@breitbart.com