Several prominent gaming journalists across America are part of a secret mailing list on which they discuss what to cover, what to ignore, and what approach their coverage should take to breaking news, Breitbart London can reveal.

High-profile editors, reporters, and reviewers from heavyweight gaming news sites such as Polygon, Ars Technica, and Kotaku use the private Google Groups mailing list, which is called Gaming Journalism Professionals or GameJournoPros, to shape industry-wide attitudes to events, such as the revelation that developer Zoe Quinn had a sexual relationship with at least one prominent games journalist — a journalist who had mentioned her and her products in his reporting.

Emails seen by Breitbart London from August of this year show Kyle Orland, a senior gaming editor at Ars Technica, discussing the Zoe Quinn scandal. He wrote: “I don’t want to in essence reward the jerks doing this by giving their ‘issue’ any attention at all … I’m not even going to give the bullshit ‘journalism ethics’ excuse for these attacks the time of day.”

Orland continued: “I would LOVE to use my platform to reproach this kind of behavior… but that would go against Quinn’s valid and understandable desire not to have this personal matter publicized by the media… Maybe we should just stick to Twitter to boost the signal on this one, rather than our ‘front pages.'”

“Maybe we should get a public letter of support going around decrying these kinds of personal attacks, signed by as many sympathetic journalists/developers as we can,” he wrote. “Maybe we should just use this as an excuse to give more attention to her work… I know I’ve been meaning to review Depression Quest since its Steam release.” 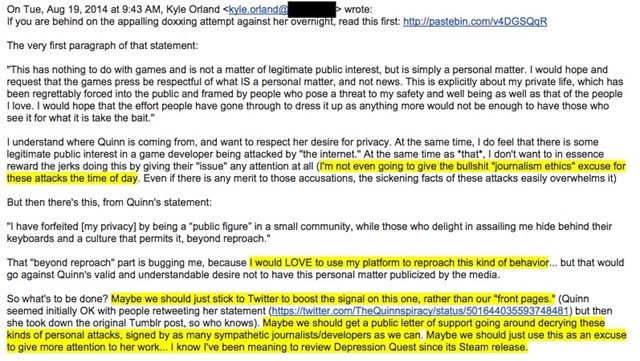 The sight of journalists not only engaging in activism on behalf of their reporting subjects but also discouraging other reporters and editors from covering stories of interest to their readers will be disturbing to many in the industry, who have long suspected a persistent bias and unusual levels of co-operation and co-ordination from senior journalists.

Polygon editor Ben Kuchera is seen on the list offering support to Quinn and chiding other writers for not actively doing the same.

In emails seen by Breitbart London, Ben Kuchera repeatedly pressures other journalists and editors to take down material on their websites that is critical of Zoe Quinn and to close down debate about her role in the video games industry by removing comments and forum posts by members of the public asking questions about journalistic propriety.

Jason Schreier, a senior writer at Kotaku, can be seen defending Nathan Grayson, the journalist who admitted to beginning a sexual relationship with Zoe Quinn just days after he mentioned her in his reporting and linking to her game, Depression Quest.

Also on the secret mailing list are James Fudge, managing editor of GamePolitics.com, and Mike Wehner, a writer for the Daily Dot, The Unofficial Apple Weblog, USA Today, and Yahoo, demonstrating that the list has influence within the mainstream media as well.

The GameJournoPros emails appear to confirm widely-held suspicions that video game journalists operate with one voice and collude on major issues to distort coverage of ethics violations and to support figures to whom they are politically sympathetic.

This revelation echoes the 2010 JournoList scandal, in which liberal reporters were caught colluding and smearing their ideological opponents in a private mailing list set up by Ezra Klein, now the editor-in-chief of Vox.com.  The exposure of JournoList cost Washington Post reporter David Weigel his job, after Weigel was seen mocking conservative figures on whom he also reported in the pages of the Post.

Readers with knowledge of the GameJournoPros list and in particular its membership are strongly encouraged to contact us with what they know.