After an 800-man brawl outside a mosque in Hamburg on Tuesday German police deployed 1,300 officers on Wednesday night, but were still unable to separate warring Islamic fundamentalists and Yazidi Kurds in violence which again led to a hospitalisation for the third night running, reports theLocal.de. 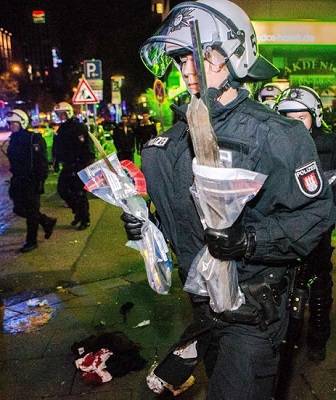 Gangs have been taking to the streets of Germany for much of this week, as “peaceful” protests by Yazidi Kurds were attacked by “ISIS terrorist Militias” of Salafist Muslims armed with broken bottles, machetes, and in some cases even firearms. The violence echoes that of the ISIS conflict in Syria and Iraq, and the riots in Turkey that killed 14 this week.

Dozens have now been injured in Germany as the numbers protesting increased night-on-night, with 400 Kurds facing off 400 Muslims on Tuesday.

An estimated 1,000 Kurds turned out on Wednesday to continue the protest, and many returned to the same mosque again on Wednesday night in defiance of their attackers.

Police, who had been called up from several states was able to keep disturbance to a comparative minimum but there were still ugly scenes, as widely reported in the German press.

Weapons included “knives, brass knuckles, iron bars, a machete and even kebab skewers”, and police reported confiscating a gun with ammunition, following another firearm taken earlier in the week.

Many Germans have expressed alarm at the events, saying the fights showed Germany was becoming a violent side-show in global conflicts, and there had been a “blurring of borders in the war propagated by the IS”.

Joachim Lenders, chairman of the local police officers union said the violence was of “civil-war like excess” and “without the professionalism of the police people would have died”. Protests also took place in Berlin, Bremen, Hannover, Dusseldorf, Dortmund, Münster, Frankfurt, and Stuttgart.