The French Prime Minister Manuel Valls has called on Jews to not heed the call of Benjamin Netanyahu to leave Europe and resettle in Israel, but his comments have come against a background of extreme violence and anti-Semitic attacks.

Vall’s comments came only hours after the discovery of a major attack on a Jewish cemetery in north-east France, and the execution-style murder of a Jewish man in Denmark as part of a terrorist rampage which has left two dead and dozens injured. Danish police are reportedly working on a line of investigation that links the killings at the weekend, which took place at a freedom of speech conference and synagogue in Copenhagen with the Charlie Hebdo attacks last month. 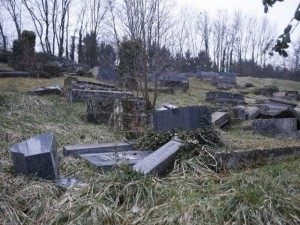 Speaking after the discovery of the cemetery attack in which 300 tombs were smashed by anti-Semitic vandals, Valls said: “My message to French Jews is the following: France is wounded with you and France does not want you to leave”. A leader in the French Jewish community has said he is “fed up” with the endless anti-Semitic attacks and they displayed a “lack of moral and ethical values”, reports theLocal.fr.

President Hollande backed up his prime minister, speaking of the recent wave of ‘new’ anti-Semitic attacks inspired by the propaganda and radicalisation sponsored and encouraged by the Islamic State and other groups, he tried to reassure: “Jews have their place in Europe and in particular in France”. Speaking of the link between the Charlie Hebdo and kosher supermarket killings and the attacks in Copenhagen and the fact both attacks targeted beacons of free speech and Jews, he said: “It was the same targets that were chosen by the terrorists.

“We see there is a link that doesn’t show there is a network but does show the terrorists are determined to hit what we are, what we represent, the values of freedom, of law, of protection that every citizen – whatever his or her religion – should have”.

The issue of anti-Semitic attacks and Jewish emigration has become a hot topic in France in the past few weeks. Military or police protection for Synagogues has become commonplace, and volunteer Jewish security has become the norm in many European nations, including Denmark where one guard, Dan Uzan was killed on Saturday. Despite France’s offer of military protection for Synagogues and businesses, Jews continue to leave Europe in numbers not seen since the 1930s. It is thought as many as 10,000 decided to leave France last year.