Earth Hour came and went again this year on Saturday the 28th of March between 8.30-9.30pm. If you didn’t notice, don’t be surprised. I think few people who were not already committed climate change catastrophists even knew it was happening. And never mind “saving the planet”. It seems the main force that now drives the event is a yearly hour of mutual appreciation and backslapping whilst switching the lights off.

Since social media in the form of Facebook and Twitter became ubiquitous tools of the chatterati, Earth Hour has become an increasingly surreal affair. Every gurning trustafarian with an internet connection decides, without fail and without irony, to post pictures of themselves sat like complete idiots in the dark.

They earnestly present themselves as really “making a difference”. Did they?

Well I suppose they could get excited by checking the National Grid’s historical data. There’s approximately a 3 Gigawatt drop in demand between 8.30-9.30 on the 28th. Wonderful! Except if you check previous weeks, there is usually a drop of at least 3 Gigawatts on a Saturday at this time on most weekends.

Oh well, what next? Many participants claimed that they are “celebrating” Earth Hour. “Celebrating” what, exactly? Perhaps they are celebrating the 3 billion+ people who do not have access to cheap energy. That’s a higher number than it would be had the Greens not spent decades campaigning against and interfering in other nations’ attempts to develop fossil and nuclear power infrastructure.

And don’t they have so much to celebrate in the energy-poor community? Over four million of them die every year from indoor air pollution. More than 50% of their premature deaths of under-5s are a result of pneumonia caused by inhaling the soot. Sounds wonderful doesn’t it? After all, there’s nothing like slumming it in solidarity for one measly hour of a year, isn’t there?

The problem is these terminal idiots of Earth Hour don’t even do going without properly. And they seem to be utterly clueless regarding the actual environmental impact of candles. Ask any eco-warrior what a candle is made of and they’ll just say ‘wax’. What they miss out is that it is paraffin wax. It’s a hydrocarbon. Burning it releases CO2. And, in fact, burning one paraffin candle for one hour releases about eight times as much CO2 as having a single 5 watt light bulb (e.g. a night light) switched on for the same period. If you tried to match the illumination produced by a single incandescent bulb with candles, the amount of CO2 you would release relative to the bulb would be even higher.

They conspicuously consume even whilst supposedly going without because they simply have to tell you, their friends, the world about the incredible sacrifice they are making. Don’t believe me? Try these for a start: 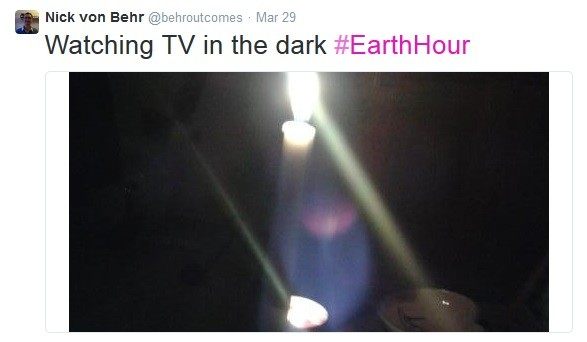 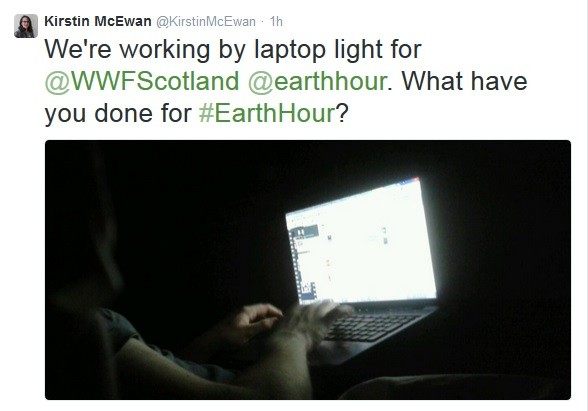 Oh the horrors! Working by laptop light! Using energy stored using the mains. Using a battery that presents a serious environmental problem in the waste stream. Doesn’t this shame you into action and keep you awake at night asking what you did to save the planet in that hour, damn it? 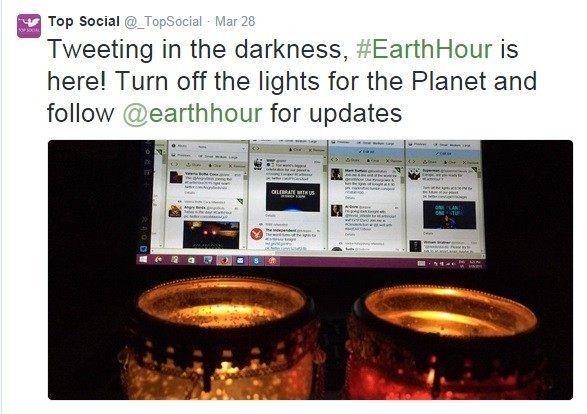 Remember, if you are going to live by the monitor’s light, be sure to do important work like tweeting about it. And most importantly, take a photo of yourself tweeting with candles in order to show you how committed you are! Remember – it is crucial for your own self esteem to be seen to be doing something, no matter how ineffectual.

The final one completely and utterly takes the biscuit: 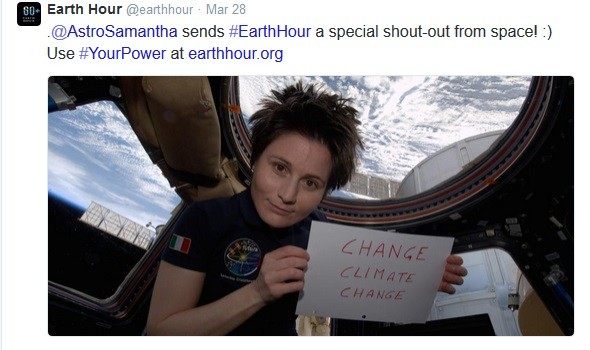 There’s hypocrisy, and then there’s promoting Earth Hour from a bloody space station. Aside from wondering what “change climate change” even means, one would have hoped that an astronaut such as Sam Cristoforetti might be a little better educated on the cost of space travel.

The International Space Station is, nominally, relatively sustainable in terms of its main energy requirements – relying primarily on massive solar panels and rechargeable batteries. Yet the cost in resources both in energy and man-made materials (it is not made out of wood, after all) to build and maintain it is enormous. And there’s ultimately still no better way to get into space than burning huge amounts of concentrated hydrocarbons.

According to NASA, the ISS has been visited by one hundred launches from the Russians alone, never mind the U.S., EU and Japanese missions. Moreover, the ISS itself, representing a modest triumph of human technology, maintains human life in the most hostile of environments – a vacuum in space. The crew simply could not survive if the man-made devices, built out of alloys, minerals and polymers were switched off. Not unless they wanted to re-enact scenes from the film Gravity. “Celebrating” Earth Hour while reliant on such an environment (and hugely costly supply chain) is simply nonsense on stilts.

Some people have expressed unwarranted fears in the past that experiments at intuitions such as CERN could result in the creation of a miniature black hole that could destroy the planet. If humans are ever going to artificially create a black hole, my theory is that it will be generated by the inward-looking ultra-narcissism and ignorant super-density of the kind of people who “celebrate” Earth Hour and wag their finger at naysayers whilst claiming they are some kind of champions for the planet.